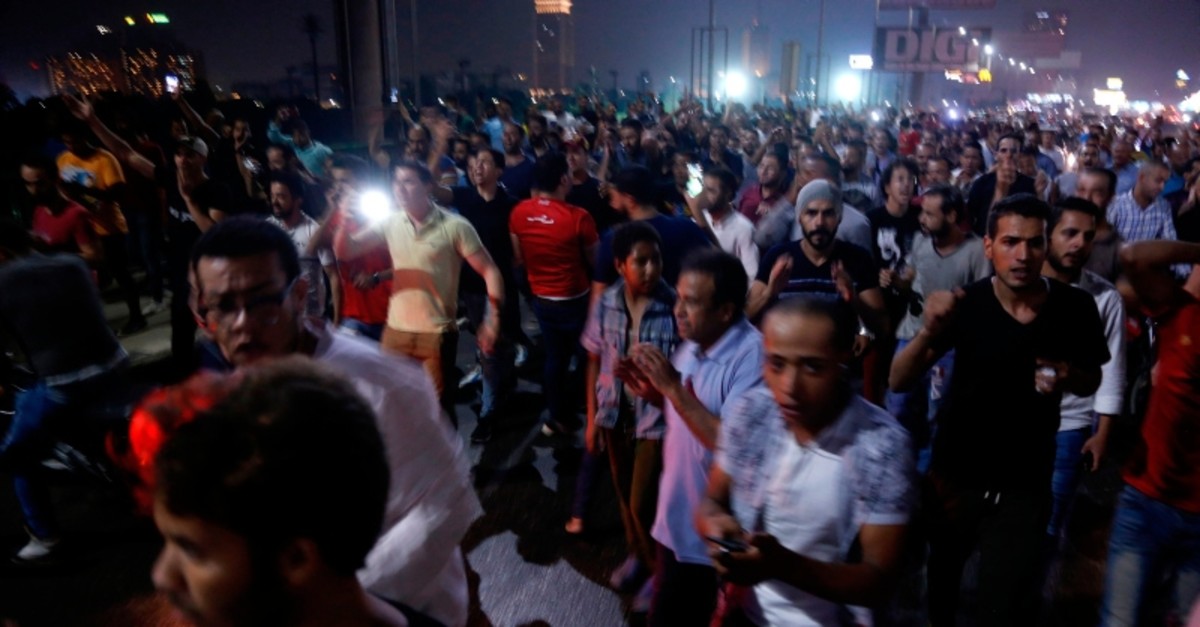 Egyptian protesters shout slogans as they take part in a protest calling for the removal of President Abdel Fattah al-Sisi in Cairo's downtown on September 20, 2019 (AFP Photo)
by Associated Press Sep 26, 2019 10:37 pm

An Egyptian rights groups said Thursday the number of people arrested and detained in the wake of last weekend's protests has risen to nearly 2,000 amid fresh calls for new rallies demanding coup leader Abdel-Fattah el-Sissi step down.

Rare protests erupted in Cairo and several other provinces last Friday with hundreds of Egyptians taking to the streets. The demonstrations followed corruption allegations leveled by a self-exiled businessman against el-Sissi and the military.

El-Sissi, who is expected to arrive in Cairo from New York where he was attending U.N. General Assembly meetings early Friday, had dismissed the accusations as "sheer lies and defamation." Police quickly dispersed the protests, but they were a startling display of street unrest.

The Egyptian Center for Economic and Social Rights released a statement on its official Facebook page on Thursday saying that 1,915 people were arrested between last weekend and early Wednesday. Among them are 96 juveniles, the statement said.

On Wednesday, authorities arrested three prominent activists including a former spokesman for a presidential candidate and the chairman of an opposition political party. State-run local media has launched a staunch campaign to discredit protesters as traitors who seek to instigate chaos. Egyptian security authorities have imposed tighter measures on Tahrir Square and downtown Cairo, the main scene of Egypt's uprising of 2011.

In a recent video, contractor Mohammed Ali, who said he had worked for the military for 15 years, called for new protests Friday.

Eight human rights groups issued a joint statement demanding the immediate release of political activists and the lifting of all restrictions on freedom of expression.

"The protests also are a reaction to the president's accumulated policies since his assumption of office, which have achieved neither political nor economic stability," read the statement.