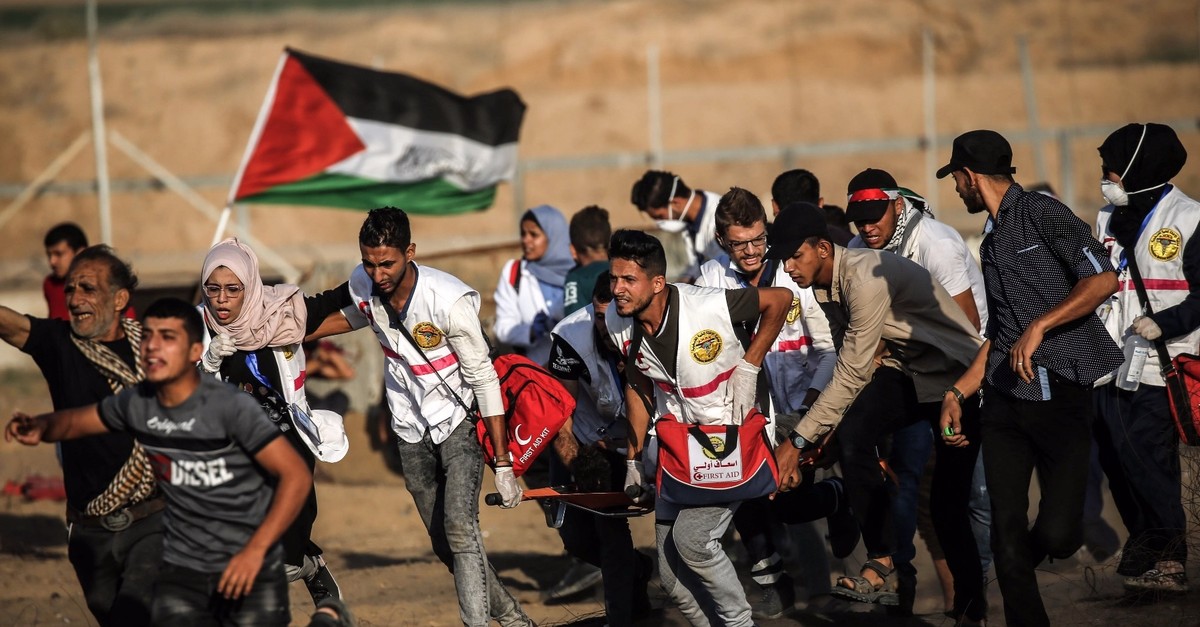 Israeli forces killed a young Palestinian on Friday during ongoing protests at the Gaza border, revealing ongoing violence against Palestinians. The Palestinian Health Ministry said 63 demonstrators were injured in the protests in recent months, 32 of them by live bullets, without explaining the nature of the other injuries.

The Israeli army said around 7,000 Palestinians had gathered at points along the border earlier Friday. They hurled incendiary devices and explosives at the security fence and military vehicles, according to an army spokesman. There were no casualties reported on the Israeli side, although two vehicles were slightly damaged. Witnesses said that the soldiers fired tear gas canisters, rubber bullets and live ammunition at demonstrators to keep them at bay.

Israel has responded to recent rallies, still held every Friday, with deadly force, killing more than 311 Palestinians and injuring thousands more. Israeli forces deployed along the volatile border with the Gaza Strip have been firing live rounds at Palestinian protesters ever since demonstrations against Israel's long-running blockade of Gaza began in March. Israel was criticized by a U.N. human rights body for its killing of protesters in Gaza and for its treatment of Palestinians, declaring it a "war crime" under the Statute of Rome. The high casualty toll triggered diplomatic backlash against Israel and new charges of excessive use of force against unarmed protesters. Rights groups have branded open-fire orders as unlawful, saying they effectively permit soldiers to use potentially lethal force against unarmed protesters. In the face of growing criticism over Gaza border violence, Israeli authorities earlier said that human rights laws do not apply to the ongoing Palestinian protests along the Gaza Strip.

According to a report released by the Al-Mezan Center for Human Rights, hundreds of Palestinian children have been subjected to Israeli violence since the Great March of Return started last year, when hundreds of thousands of Palestinian demonstrators converged on the buffer zone separating Gaza from Israel. During the same period, 17 children were detained by Israeli forces during protests. The report also revealed that there has been an increase in the number of Palestinian children killed and injured by Israeli forces, while pointing out the ongoing systematic violations of human rights in the Gaza Strip.

Israeli violence has continued amid years of diplomatic paralysis, diminishing hopes for peace and escalating Palestinian frustration. Israel is repeatedly targeted by rockets from Gaza and often responds by conducting retaliatory airstrikes. The Palestinians are demanding that the blockade imposed by Israel and Egypt on the territory be lifted and want the return of Palestinian refugees to what is now Israel. The years-long blockade has shattered the coastal enclave's economy and deprived its 2 million inhabitants of free movement in and out of Gaza and many basic amenities. Since 2007, the Gaza Strip has been under a crippling Israeli and Egyptian blockade that has gutted its economy and deprived its roughly 2 million inhabitants of many vital commodities, including food, fuel and medicine. In the long-embargoed enclave, the humanitarian situation has grown worse by the day. The U.N. Relief and Works Agency (UNRWA) earlier stated that there are now some 620,000 Gazans who live in abject poverty, meaning those who cannot cover their basic food needs and who have to survive on $1.6 per day, and nearly 390,000 living in absolute poverty.