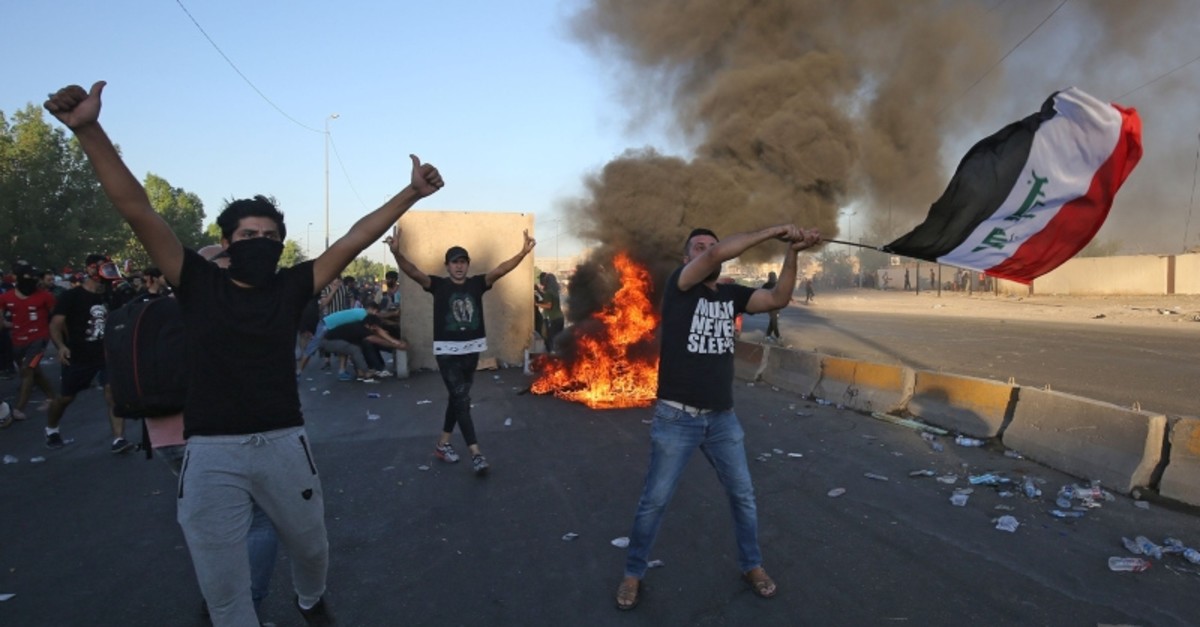 At least eight people were killed and 25 wounded in new clashes between protesters and police in eastern Baghdad on Sunday, police and medical sources said.

The clashes were in Sadr city, a sprawling residential district of the Iraqi capital, and added to a death toll of more than 100 people killed in less than a week of protests over corruption and unemployment.

The United Nations urged Saturday an end to violence in Iraq, after five days of anti-government rallies.

The demonstrations — which have evolved from initial demands for employment and better services to the fall of the government — carried on into the night in various neighborhoods of Baghdad and southern Iraq, as authorities struggled to agree a response.

Security forces broke up a mass rally in the east of Baghdad, where protesters faced volleys of tear gas and live rounds fired in their direction, witnesses said.

"Five days of reported deaths and injuries: this must stop," said the United Nations' top official in Iraq, Jeanine Hennis-Plasschaert.

She described the violence as a "senseless loss of life" and said those behind it must be held accountable.

The authorities accused unidentified snipers of shooting into the crowd and said they were searching residential neighborhoods for those responsible.

At least 104 people have been killed and more than 6,000 wounded in less than a week of unrest in Iraq, Interior Ministry spokesman Major General Saad Maan said on Sunday on state TV.

Maan said eight members of the security forces were among those killed and 51 public buildings and eight political party headquarters had been torched by protesters.

The mainly young, male protesters have insisted their movement was not linked to any party or religious establishment and have scoffed at recent overtures by politicians.

On Saturday, demonstrators in the southern city of Nasiriyah set fire to the headquarters of six different political parties.

Thousands also descended on the governorate in the southern city of Diwaniyah, where gunfire was unleashed into the air, AFP correspondents there said.

Parliament's human rights commission said Saturday that most of those who have died in the last five days fell in Baghdad, while 250 other people were treated in the capital for sniper wounds.

"We demand clarification from the Iraqi government on those wounded in Baghdad by sniper fire, which is ongoing today," the commission said.

Parliament had been due to meet at 1:00 pm (1000 GMT) but could not reach quorum, after firebrand cleric Moqtada al-Sadr's bloc of 54 lawmakers and other factions boycotted the session.

The former militia leader threw his weight behind the demonstrations on Friday with a call for the resignation of Prime Minister Adel Abdel Mahdi.

Sadr's movement has the power and organization to bring large numbers of supporters onto the streets, but at the risk of alienating many of those whose protests in recent days have been based on rejecting all of Iraq's feuding political factions.

Parliamentary speaker Mohammed al-Halbusi had extended a hand to protesters saying "your voice is being heard".

But one protester said late Friday "these men don't represent us".

Iraq has a population of just under 40 million people, and is currently the fifth-largest oil producer and exporter worldwide, and the second-largest OPEC producer.

Youth unemployment stands at 25%, twice the overall rate, according to the World Bank which adds that an estimated 22.5% of the population was living in poverty in 2014.

The largely spontaneous protests have presented the biggest challenge yet to the Iraqi premier, who came to power a year ago as a consensus candidate promising reforms but whose response to protesters has been seen as tepid.

"Abdel Mahdi should have come forward with decisive changes, like the sacking of leading politicians accused of corruption," said Iraqi analyst Sarmad al-Bayati.

Authorities restricted access to Facebook and Whatsapp after anti-government demonstrations began on Tuesday, before ordering a total network shutdown on Wednesday.

"This is the first time we hear people saying they want the downfall of the regime," Haddad said.

Sadr, a former militia leader turned nationalist politician, demanded on Friday that the government resign to clear the way for a fresh election supervised by the United Nations.

His bloc is the largest in parliament, and his intervention sets the scene for a possible showdown with the speaker, who has made his own bid to make political capital out of the protests.

Halbusi sought to allay protesters Saturday by announcing in a news conference a long list of promised reforms over employment and social welfare, but it was not clear he would succeed in appeasing the demonstrators.