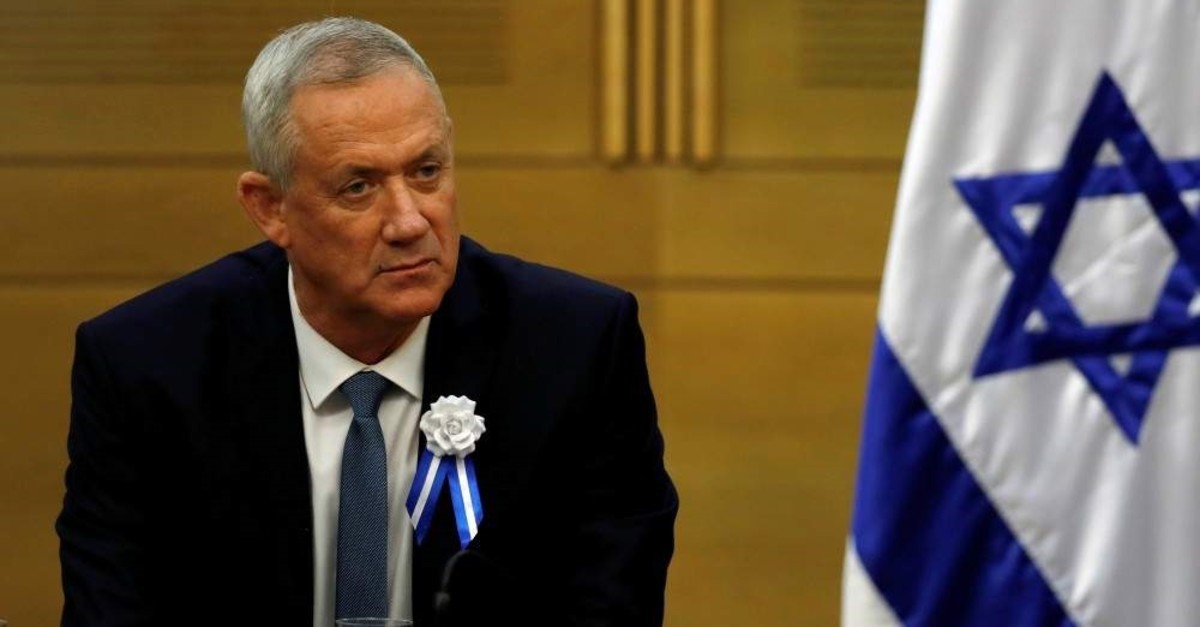 Benny Gantz, leader of the Blue and White party, looks on during his party faction meeting at the Knesset, Israel's parliament, in Jerusalem, Oct. 3, 2019. (Reuters Photo)
by Compiled from Wire Services Oct 23, 2019 8:25 pm
Israel's President Reuven Rivlin on Wednesday evening tasked former military chief Benny Gantz with forming the next government, after Prime Minister Benjamin Netanyahu failed to do so.
At a press conference in Jerusalem, Rivlin called on political parties to make "concessions," while Gantz promised to "try to form a liberal union government."
Netanyahu announced Monday that he had failed to form a majority government in parliament, marking a major setback for the embattled Israeli leader that plunges the country into a new period of political uncertainty.
In a statement, Netanyahu said he had worked "tirelessly" to establish a unity government with Gantz, but been repeatedly rebuffed. Gantz could now face an equally difficult task.
Gantz's Blue and White party said in a statement this week that "now is the time of action."
"Blue and White is determined to form the liberal unity government, led by Benny Gantz, that the people of Israel voted for a month ago," it said.
Gantz has vowed to unify the country and restore national institutions after Netanyahu's decade-long rule, which has deepened Israel's religious and political divides and been roiled by corruption allegations.
In contrast to Netanyahu, whose political career spans three decades, the 60-year-old Gantz is a newcomer who only burst onto the scene over the last year. The towering former general's party, Blue and White, is a newly formed centrist coalition that includes the popular secular politician Yair Lapid as well as other former senior military officers and some of Netanyahu's fiercest critics.
At times, Gantz has criticized Netanyahu's handling of security issues, particularly in the Gaza Strip, and has touted his time as army chief, when he oversaw a devastating 2014 war in Gaza. He also has hinted at reviving the peace process with the Palestinians. But Gantz has been vague, apparently wary of alienating potential coalition partners, and focused most of his efforts at portraying himself as a fresh alternative to Netanyahu.
There is no guarantee, however, that Gantz will succeed.
He has expressed willingness to form a partnership with Likud, but not if Netanyahu continues to lead while he faces such serious legal problems. For the time being, Likud has remained steadfastly behind its leader.
Without Likud, Gantz will have a hard time securing a majority in parliament. The opposition to Netanyahu includes a diverse group of parties, ranging from Arab parties to the secular ultranationalist party Yisrael Beitenu, that are unlikely to sit together in partnership.
If Gantz fails during his 28-day window, a majority of lawmakers could try to endorse a third candidate, something that has never happened before. And if that fails, the country would be forced into the unprecedented scenario of a third election in under a year.
Last Update: Dec 20, 2019 1:12 am
RELATED TOPICS