Rallies turn violent in Lebanon amid clashes between army, protesters 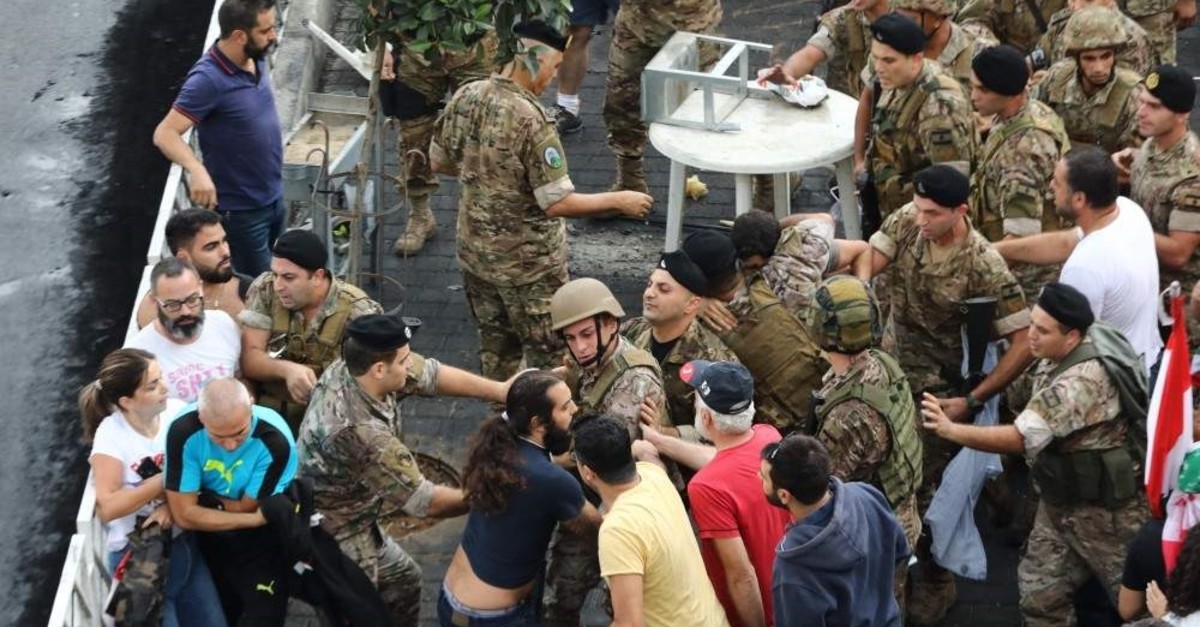 Largely peaceful protests in Lebanon have turned violent in some areas, where Lebanese army troops scuffled with demonstrators yesterday. On the seventh day of nationwide protests aimed at putting pressure on the country’s political elite, protesters have continued to block major roads and highways while facing army soldiers.

A number of roads were blocked yesterday in Beirut while Lebanese soldiers and protesters clashed in two main areas near Zouk Mosbeh, Jal al-Dib and Nahr al-Kalb. North of Beirut, local TV channels broadcast live from other parts of the highway, the main artery to the capital, showing protesters trying to resist the army's efforts to clear a path.

After failing to persuade protesters to open the road, which leads to and from the capital, soldiers beat some of them and the Red Cross took the injured to hospital, witnesses said. Local reports showed that hundreds of soldiers forcibly attempted to open the roads while arresting many people. A security source said the army's decision was still to refrain from using any force.

Sparked by proposed new taxes, the protests have shaken the country and its top leaders, who are scrambling to come up with concessions to appease the public. The protests have been overwhelmingly peaceful since Friday evening, while some demonstrators have clashed with security forces. On Monday night, the Lebanese army stopped a convoy of people holding the flags of the powerful Shiite movements Hezbollah and Amal heading to the Beirut protest site. Soldiers skirmished in Beirut with young men, while both parties denied they were behind the convoy of scores of supporters.

The protesters have so far rejected the government's package of economic reforms, which were presented to the public on Monday. The reforms included a symbolic halving of the salaries of ministers and lawmakers, as well as moves toward implementing long-delayed measures vital to putting the public finances on a sustainable path. Following a nearly five-hour cabinet meeting, Hariri announced a series of economic and financial reforms he described as a “coup,” saying no government in Lebanon’s history has taken such radical steps before.

Lebanon’s Maronite Patriarch Bechara Boutros Al-Rai said yesterday that reform measures enacted to calm nationwide protests were a good "first step" but that a new cabinet was required to implement them. In a televised speech Rai said he supported the protests and urged them to remain peaceful. "The list of reforms is a positive first step but it requires amending the ministers and renewing the administrative team," Lebanese broadcaster LBC quoted Rai as saying. Lebanon’s political system was set up to balance power between the country’s religious sects, including Christians, Sunni Muslims, Shiite Muslims and Druze. Many current senior politicians came to prominence during the country’s 15-year civil war that ended in 1990.