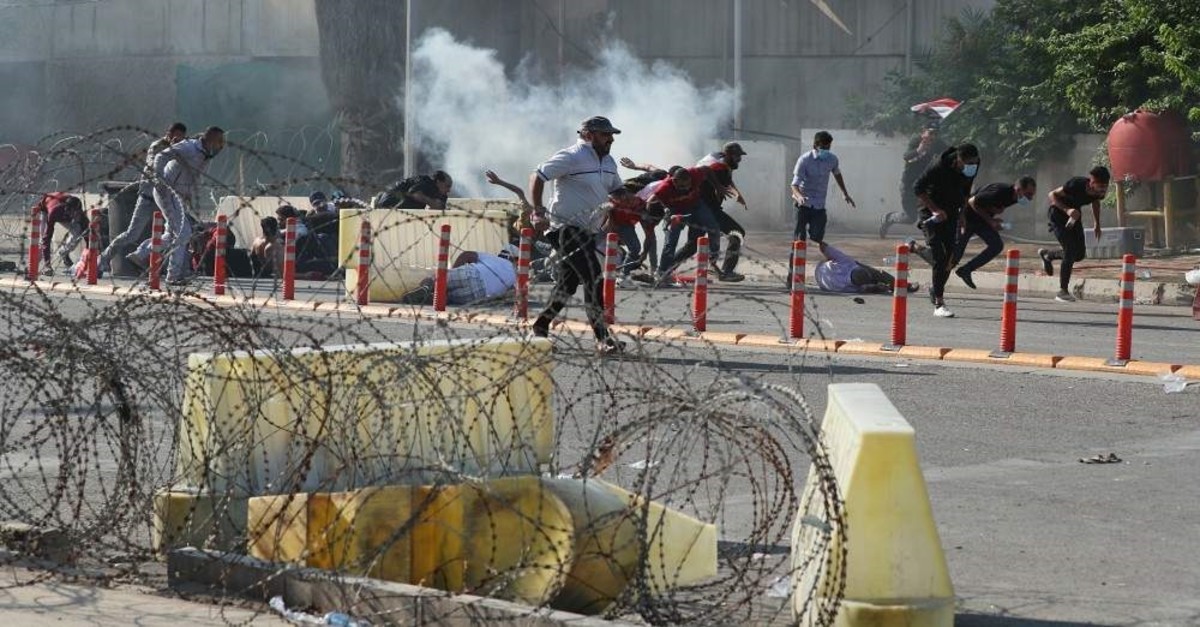 The protests were the second phase of a week-long movement in early October demanding an end to widespread corruption, unemployment and an overhaul of the political system. Activists called Iraqis to go out on the streets again on Friday, which marks a year since Prime Minister Adel Abdel Mahdi came to power. It is also a deadline set by the country's top Shiite authority for him to enact desired reforms. But the rallies began early, with hundreds gathering in the capital's iconic Tahrir (Liberation) Square on Thursday evening.

On Friday, many crossed the bridge to mass near the Green Zone, which hosts government offices and foreign embassies, but security forces used a volley of tear gas to push them back. "Two demonstrators died, with preliminary information indicating they were hit in the head or face by tear gas canisters," said Ali Bayati, a member of the Iraqi Human Rights Commission. He said nearly 100 more people were wounded. There were no reports of live fire being used to disperse protesters.

- 'We want dignity!' -"We're not hungry -- we want dignity!" a protester shouted in Baghdad on Friday morning, while another lashed out at "the so-called representatives of the people who have monopolised all the resources".

One in five people lives in poverty in Iraq and youth unemployment sits around 25 percent, according to the World Bank. The rates are staggering for OPEC's second-biggest oil producer, which Transparency International ranks as the 12th most corrupt state in the world. "I want my share of the oil!" another protester told AFP. Rallies were also rocking the southern cities of Diwaniyah, Najaf and Nasiriyah, where demonstrators said they would remain in the streets "until the regime falls".

Iraq's highest Shiite authority, Grand Ayatollah Ali al-Sistani, who has backed reforms, urged protesters Friday during his weekly sermon to use "restraint" to stop the demos descending into "chaos". But the real test will be the afternoon, when many are expecting supporters of Moqtada al-Sadr -- an influential cleric who controls the largest parliamentary bloc -- to hit the streets. His supporters have breached the Green Zone in previous years. This week, he called on his supporters to protest and even instructed members of his own paramilitary force to be on "high alert." They could be seen in parts of Baghdad on Friday in a clear show of force.

The movement is unprecedented in recent Iraqi history both because of its spontaneity and independence, and because of the brutal violence with which a torrent of protests on October 1-6 was met. At least 157 people were killed, according to a government probe published on Tuesday, which acknowledged that "excessive force" was used. A vast majority of them were protesters in Baghdad, with 70 percent shot in the head or chest. In response, Abdel Mahdi issued a laundry list of measures meant to ease public anger, including hiring drives and higher pensions for the families of protesters who died.

The beleaguered premier defended his reform agenda in a scheduled televised appearance early Friday, telling watchers it was their "right" to demonstrate as long as they did not "disturb public life". But he also said political figures demanding "reform" had themselves failed to enact it, in an apparent reference to Sadr's "Alliance towards Reform" bloc. Some have backed the government, including the powerful Hashed al-Shaabi paramilitary force whose political branch is the second-largest parliamentary bloc. And Iraq's mostly-Kurdish north and Sunni west have stayed out of the protests. Iraq has been ravaged by decades of conflict that finally calmed in 2017 with a declared victory over the Islamic State group. Thus began a period of relative calm, with security forces lifting checkpoints and concrete blast walls and traffic choking city streets at hours once thought too dangerous. Restrictions had even softened around the Green Zone but were reinstated as the October demonstrations picked up in Tahrir, which lies just across the Tigris River. Authorities also imposed an internet blackout, which has been mostly lifted although social media remains blocked.
RELATED TOPICS