Chaos across Iraq as violence soars amid protests 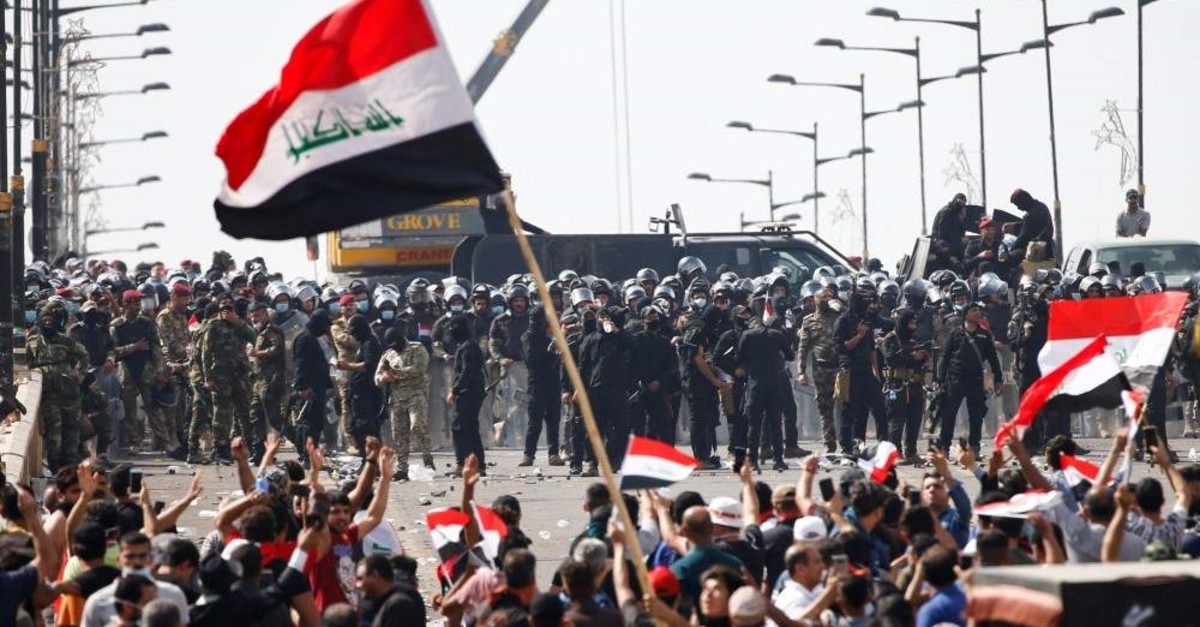 A new wave of anti-government protests rocked war-torn Iraq as at least five people were killed during violent clashes in Baghdad; meanwhile in the south protesters set fire to government buildings

At least five people were killed and more than 200 injured Friday as Iraqi protesters took to the streets, unconvinced by promises of reform. Despite attempts to avoid further deadly violence, chaos has prevailed across the country with protesters calling for the resignation of the government and an end to corruption.
Thousands of people began converging to the capital's iconic Tahrir (Liberation) Square as of early Friday, carrying Iraqi flags and posters calling for change and reform. However, after thousands of protesters removed metal security barriers and crossed the Jumhuriyya Bridge, leading to Baghdad's heavily fortified Green Zone, home to the U.S. Embassy and Iraqi government offices, soldiers fired tear gas to disperse them. After they tried to remove concrete barriers near the entrance of the Green Zone, they fired live rounds to push the protesters back.

At least 3,000 protesters in the southern Iraqi city of Nasiriya broke into the provincial government building and set it on fire. Meanwhile, protesters set fire to offices belonging to a Shiite political party and a Shiite militia group in Iraq's southern Muthanna province. The offices of the Hikma movement and Asaib Ahl al-Haq were set ablaze by protesters in central Samawa city. Rallies were also rocking the southern cities of Diwaniyah, Najaf and Nasiriyah, where demonstrators said they would remain in the streets "until the regime falls."

The country’s Shiite Muslim spiritual leader, Ayatollah Ali Sistani, urged both protesters and security forces to exercise "restraint" to keep renewed demonstrations from degenerating into "chaos." Sistani, who is widely revered among Iraq's Shiite majority, had given Iraqi Prime Minister Abdel Mahdi until Oct. 25 to respond to protesters' demands to fight corruption and unemployment.

The current round of protests has also been endorsed by the Shiite cleric, Muqtada Sadr, who has a popular Shiite support base and the largest number of seats in parliament. He has called on the government to resign and suspended his bloc's participation in the government until it comes up with a reform program. However, powerful Iran-backed Shiite militias have stood by the government and suggested the demonstrations were a "conspiracy" from the outside.

The protests began on Oct. 1 over corruption, unemployment and lack of basic services but quickly turned deadly as security forces cracked down, using live ammunition for days. The protests then spread to several, mainly Shiite-populated, southern provinces and authorities imposed a curfew and shut down the internet for days in an effort to quell the unrest.

After a week of violence in the capital and the country's southern provinces, a government-appointed inquiry into the protests determined that security forces had used excessive force, killing 149 people and wounding over 3,000, since the protests began Oct. 1. It also recommended the firing of security chiefs in Baghdad and the south. Eight members of the security forces were also killed. On Oct. 6, the Interior Ministry put the number killed at 96, with 6,100 wounded, the group said.

The protests are similar to those that have engulfed Lebanon in recent days in that they are economically-driven, largely leaderless and spontaneous against a sectarian-based system and a corrupt political class that has ruled for decades and driven the two countries to the brink of economic disaster.

In Iraq, one in five people lives in poverty and youth unemployment sits around 25%, according to the World Bank. The rates are staggering for the Organization of the Petroleum Exporting Countries' (OPEC) second-biggest oil producer, which Transparency International ranks as the 12th most corrupt state in the world. The unrest poses an unprecedented challenge for Prime Minister Mahdi, who took office last year as a consensus candidate of powerful Shiite religious parties that have dominated the country since the fall of Saddam Hussein in 2003.
The protests in Iraq threaten to plunge the country into a new cycle of instability that potentially could be the most dangerous this conflict-scarred nation has faced, barely two years after declaring victory over the terrorist group Daesh.