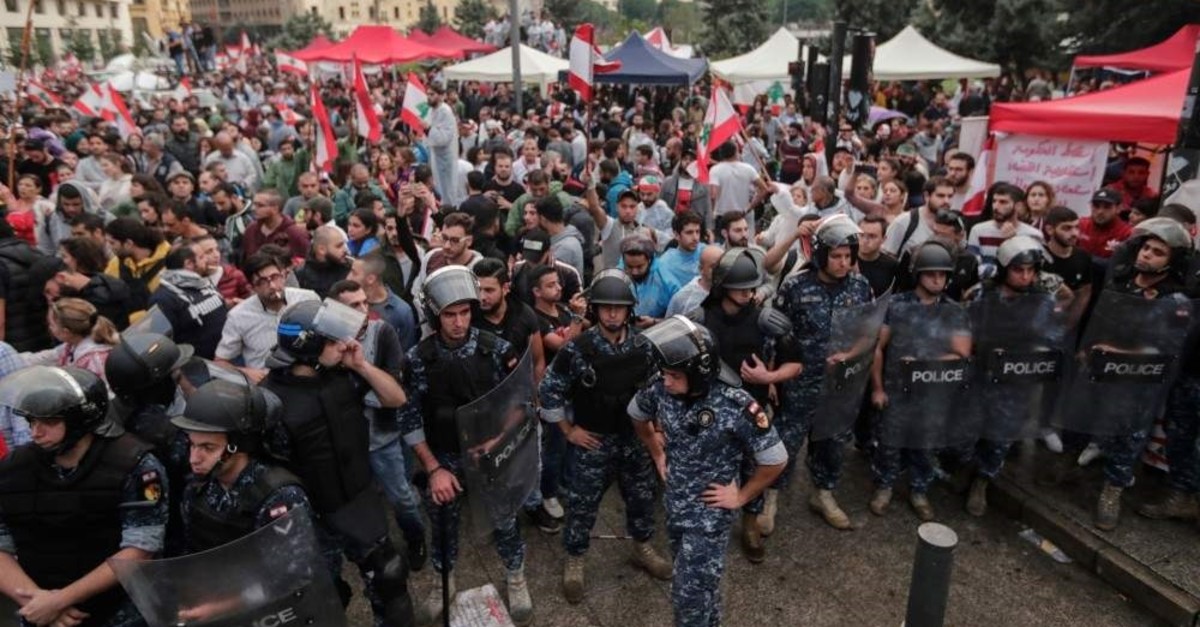 Anti-government protesters rally on the eighth day of protest against tax increases and official corruption, at Riad al-Solh square in the capital Beirut on October 24, 2019. - Lebanon's president offered today to meet the protesters whose week-old mobilisation to demand a complete overhaul of the political system has brought the country to a standstill. (AFP)
by Compiled from Wire Services Oct 25, 2019 5:57 pm

Lebanon's president pleaded with tens of thousands of protesters who have blocked main roads and paralyzed the nation for days, urging them to back economic reforms proposed by the prime minister as the "first step" toward saving the country from economic collapse. But, Michel Aoun's first speech since the start of the unprecedented protest movement was met with disdain by demonstrators who see him and the entire political class as part of the problem, not the solution. As the protests entered their second week with banks, schools and public institutions shuttered, the country appeared headed for a protracted crisis with no clear road map for a solution.

Sparked on Oct. 17 by a proposed tax on free calls made through messaging apps such as WhatsApp, the protests have morphed into a cross-sectarian street mobilization against a political system seen as corrupt and broken. Largely peaceful protests in Lebanon have turned violent in some areas, where Lebanese army troops scuffled with demonstrators. Protesters have continued to block major roads and highways while facing army soldiers.

In his speech, Aoun told protesters he was "ready to meet your representatives... to hear your demands.” He suggested that a government reshuffle might be needed, an option that other leaders have hinted they would consider, but which would fall far short of demonstrators' demand that the entire government quit.

Aoun-allied Minister of State for Presidential Affairs Salim Jreissati told private television LBCI that the government had three options: replacing four ministers from the Lebanese Forces party who quit the government on Saturday, a broader reshuffle, or the creation of a new government. Following Aoun's speech, Prime Minister Saad Hariri tweeted that he welcomed Aoun's call to "reconsider the current government's status," apparently referring to a potential cabinet reshuffle.

On Monday, Prime Minister Saad Hariri announced a package of economic reforms in an attempt to quell the mass protests and growing anger against his cabinet. The plan includes steps to cut Lebanon's huge deficit by slashing salaries of politicians by half and giving financial help to families in poverty. Lebanon suffers from high unemployment, little growth and one of the highest debts ratios in the world, with a debt burden reaching $86.2 billion in the first quarter of 2019, according to a statement by the Lebanese Ministry of Finance in May 2019. The country is under pressure from the World Bank and the International Monetary Fund (IMF) to take austerity measures in return for financial support. The Lebanese economy has been hit by political paralysis and regional conflicts, among other factors.