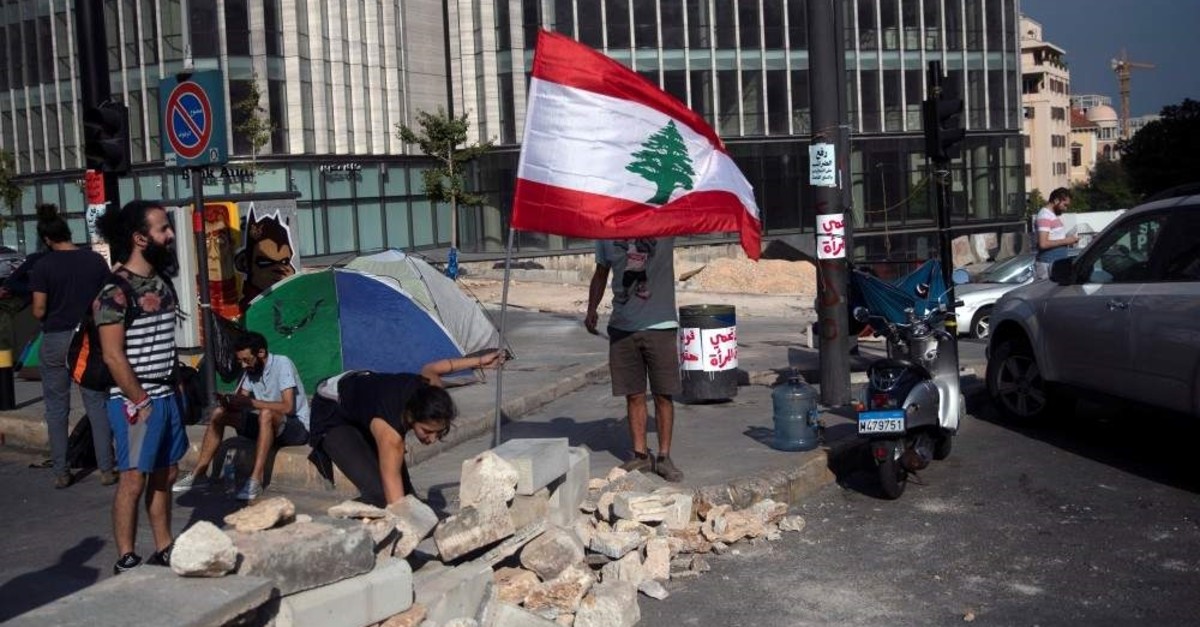 Demonstrators plant a flag as they block a highway during ongoing anti-government protests in Beirut, Oct. 28, 2019. (REUTERS Photo)
by Compiled from Wire Services Oct 28, 2019 5:40 pm

Lebanese soldiers have forcibly removed anti-government protesters from a highway linking the southern city of Sidon to the capital, Beirut, and briefly detained around dozen of them, as they kept up the pressure on politicians they accuse of corruption by setting up new road blocks.

In the southern city of Sidon, army soldiers sought to persuade sitting demonstrators to move from a main highway stretching to Beirut, picking some up off the ground. The protesters raised their hands and chanted "peaceful, peaceful" in unison.

The protests have been overwhelmingly peaceful since the beginning, while some demonstrators have clashed with security forces. Security forces have exercised restraint, dragging protesters off the roads by their arms and legs without arresting them. Last Monday, the Lebanese army stopped a convoy of people holding the flags of the powerful Shiite movements Hezbollah and Amal heading to the Beirut protest site. Soldiers skirmished in Beirut with young men, while both parties denied they were behind the convoy of scores of supporters.

Defying pleas from Lebanon's top leaders, protesters sought to keep the country on lockdown for a 12th consecutive day by cutting off some of the main thoroughfares, including the main north-south highway. The crisis is deadlocked with no sign of moves by the government to give ground to protesters whose demands include its resignation. Lebanon's political leaders have appeared shell-shocked, trying simultaneously to express sympathy for the protest movement while warning of chaos in the case of a power vacuum.

The country’s reviled political elite has been defending a belated package of economic reforms and appeared willing to reshuffle the government, but protesters who have stayed on the streets since Oct. 17 want more. The reforms included a symbolic halving of the salaries of ministers and lawmakers, as well as moves toward implementing long-delayed measures vital to putting public finances on a sustainable path. Following a nearly five-hour cabinet meeting, Prime Minister Saad Hariri announced a series of economic and financial reforms he described as a “coup,” saying no government in Lebanon’s history has taken such radical steps before.

The leaderless protest movement, driven mostly by a young generation of men and women born after the 1975-1990 civil war, has even been described by some as the birth of a Lebanese citizen identity. Lebanon’s political system was set up to balance power between the country’s religious sects, including Christians, Sunni Muslims, Shiite Muslims and Druze. Many current senior politicians came to prominence during the civil war. The protesters see them as corrupt and incompetent and have so far dismissed measures proposed by the political leadership to quell the protests.

Lebanon suffers from high unemployment, little growth and one of the highest debts ratios in the world, with a debt burden reaching $86.2 billion in the first quarter of 2019, according to a statement by the Lebanese Ministry of Finance in May 2019. The country is under pressure from the World Bank and the International Monetary Fund (IMF) to take austerity measures in return for financial support.