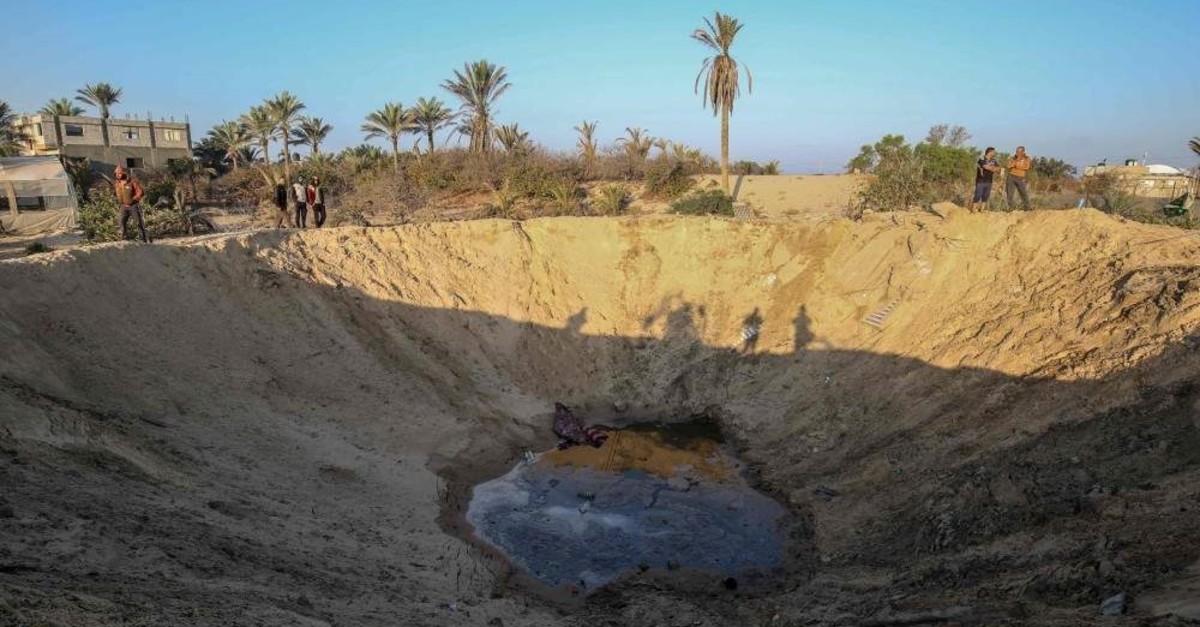 Palestinian men walk around a crater caused by an Israeli airstrike launched in response to rocket fire, in Khan Yunis in the southern Gaza Strip on November 2, 2019. (AFP Photo)
by Daily Sabah with AA Nov 02, 2019 2:13 pm

A Palestinian youth was killed in an Israeli raid on the blockaded Gaza Strip on Saturday, according to the Health Ministry. The raid was part of a wave of pre-dawn airstrikes targeting Khan Younis city in the southern Gaza Strip.

Ahmed al-Shahri, 27, died of wounds he sustained from the raid, ministry spokesman Ashraf al-Qidra said in a statement.

Two other people were injured in the attack, the spokesman said.

The Israeli army said it had struck a number of targets belonging to Palestinian group Hamas in Gaza after rocket fire from the Palestinian territory, which caused damage but no casualties.

No Palestinian group has claimed responsibility for the rocket fired.

Israeli violence has continued amid years of diplomatic paralysis, diminishing hopes for peace and escalating Palestinian frustration. Palestinians are demanding that the blockade imposed by Israel and Egypt on the territory be lifted, and want the return of Palestinian refugees to what is now Israel.

The years-long blockade has shattered the coastal enclave's economy and deprived its 2 million inhabitants of free movement in and out of Gaza and many vital commodities, including food, fuel and medicine. Since 2007, the Gaza Strip has been under a crippling Israeli and Egyptian blockade that has gutted its economy. In the long-embargoed enclave, the humanitarian situation has grown worse by the day.