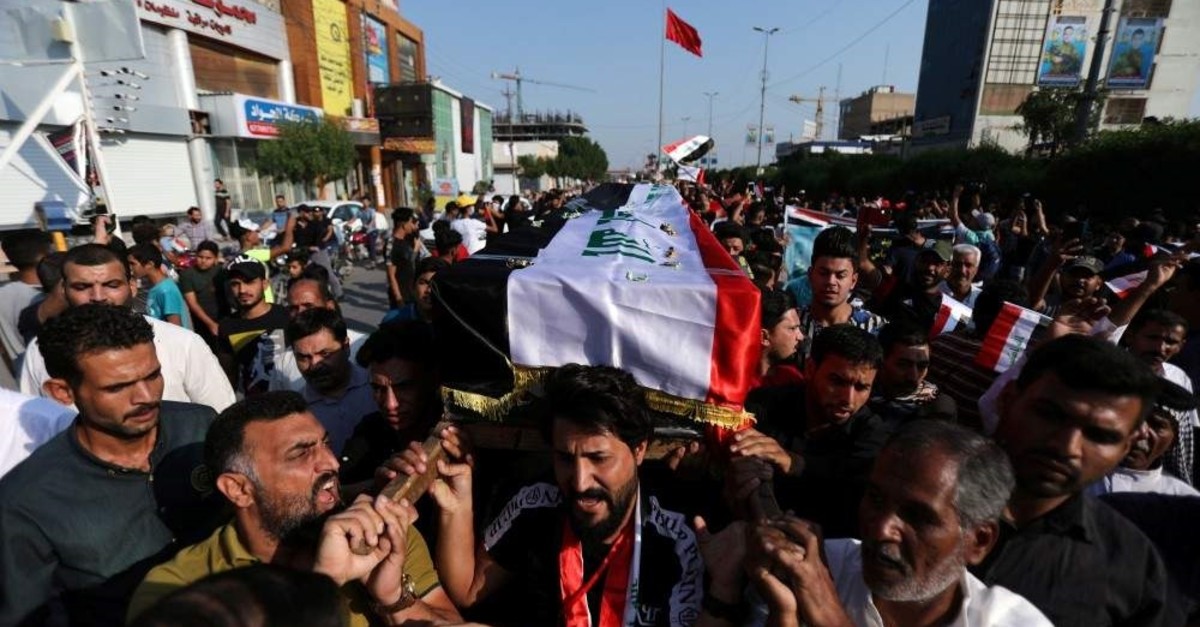 Iraqi mourners carry the coffin of a demonstrator who was killed in anti-government protests during a funeral in the holy city of Karbala, Iraq Nov. 4, 2019. (Reuters Photo)
by Associated Press Nov 04, 2019 4:48 pm
Iraqi security forces shot dead three protesters and wounded 19 during a nighttime attack on the Iranian Consulate in the Shiite holy city of Karbala in southern Iraq, police officials said Monday.
The anti-government protest in Karbala and elsewhere in Iraq, which have been fueled by local grievances and mainly directed at political elites, have also posed a challenge to Iran.
More than 250 people have been killed so far since the protests first erupted last month as security forces moved in to contain the increasingly violent rallies.
Tehran has been a staunch ally of Iraq and closely backs both its Shite-led government and powerful armed groups in the Arab country.
The anti-government protests have often turned violent, with security forces opening fire and protesters torching government buildings and headquarters of Iran-backed militias. The increasingly violent crackdown in Iraq has raised fears of a backlash by Iran and its allies.
On Sunday night, dozens of Iraqi protesters attacked the consulate in Karbala, scaling the concrete barriers ringing the building and tried to bring down the Iranian flag and replace it with the Iraqi flag but could not reach it. They then placed an Iraqi flag on the wall surrounding the consulate.
The protesters also lobbed molotov cocktails into the consulate grounds, setting off fires.
Iraqi security officials said three protesters were shot and killed while 19 were wounded. Seven policemen were also wounded, they said, speaking on condition of anonymity in line with regulations.
In Baghdad, many roads were closed since the early hours of Monday to prevent employees from reaching their work.
Qais al-Khazali, the leader of one of Iraq's most powerful Iranian-backed Shiite militias, said in an interview aired on Iraqi TV that the U.S., Israel, some Arab Gulf nations and local officials are working to "incite strife and chaos" in Iraq.
Al-Khazali, who heads Asaib Ahl al-Haq, or League of the Righteous group, singled out the United Arab Emirates. He vowed to retaliate for the death of one of his group's commanders who was killed recently by protesters in southern Iraq.
"The Americans and the Israelis will pay a price," he said.
Iranian-backed militias in Iraq have blamed Israel for several drone attacks in the past summer that targeted the group's posts in Iraq and neighboring Syria.
Last Update: Dec 20, 2019 1:26 am
RELATED TOPICS