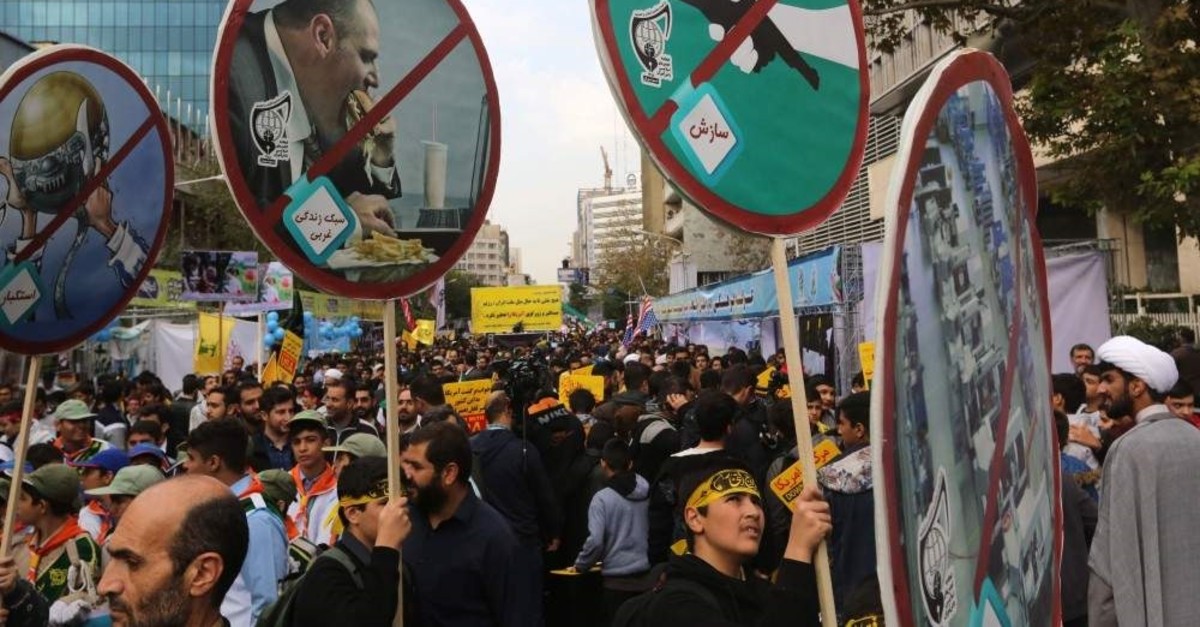 Iranian protesters hold anti-U.S. placards during a rally outside the former U.S. Embassy in the Iranian capital Tehran on Nov. 4, 2019, to mark the 40th anniversary of the Iran hostage crisis. (AFP Photo)
by Associated Press
Nov 05, 2019 10:31 am

Reviving decades-old cries of "Death to America," Iran on Monday marked the 40th anniversary of the 1979 student takeover of the U.S. Embassy in Tehran and the 444-day hostage crisis that followed as tensions remain high over the country's collapsing nuclear deal with world powers.

Demonstrators gathered in front of the former U.S. Embassy in downtown Tehran as state television aired footage from other cities across the country.

"Thanks to God, today the revolution's seedlings have evolved into a fruitful and huge tree that its shadow has covered the entire Middle East," said Gen. Abdolrahim Mousavi, the commander of the Iranian army.

However, this year's commemoration of the embassy seizure comes as Iran's regional allies in Iraq and Lebanon face widespread protests. The Iranian Consulate in Karbala, Iraq, a holy city for Shiites, saw a mob attack it overnight. Three protesters were killed during the attack and 19 were wounded, along with seven policemen, Iraqi officials said.

Associated Press video showed a fire burned the consulate's gate as demonstrators threw gasoline bombs and climbed its walls, some waving an Iraqi flag. Iranian media only reported a "protest outside" of the diplomatic post, adding that things had returned to normal.

President Donald Trump retweeted posts by Saudi-linked media showing the chaos outside the consulate. The violence comes after the hard-line Keyhan newspaper in Iran reiterated a call for demonstrators to seize U.S. and Saudi diplomatic posts in Iraq in response to the unrest.

Demonstrators at other rallies on Monday cried: "Death to America!" and "Death to Israel!" Lawmakers in parliament echoed those cries after approving the outline of a bill that would include anti-American teachings in school textbooks. Others at protests burned U.S. flag replicas and waved signs mocking Trump and America.

A billboard at Tehran's Vali-e-Asr Square, used by hard-liners to highlight their political views, showed people waving flags from around the world and cheering as an American flag burned. A caption on it read: "We are the superpower."

Speaking in front of the former U.S. Embassy in Tehran, Mousavi referred to America as a "scorpion" and said the "era of imposing pressure with zero expense is over."

The U.S. is pushing for the "surrender of Iran in a gift wrap of words like negotiation and engagement," the general said.

Typically, members of Iran's regular armed forces don't speak at the embassy on the anniversary, rather civilians and those in its paramilitary Revolutionary Guard hold speeches. Mousavi's appearance likely represented an effort by Iran's theocratic government to show a united front against the pressure it faces from the U.S. under Trump.

On Sunday, Iran's Supreme Leader Ayatollah Ali Khamenei reiterated his opposition to negotiation with the U.S., saying Tehran had outmaneuvered America in the four decades since its Iranian Revolution.

What exactly led to the 1979 takeover of the embassy was obscure at the time to Americans who for months could only watch in horror as TV newscasts showed Iranian protests at the embassy. Popular anger against the U.S. was rooted in the 1953 CIA-engineered coup that toppled Iran's elected prime minister and cemented the power of Shah Mohammad Reza Pahlavi.

The shah, dying from cancer, fled Iran in January 1979, paving the way for the country's 1979 Revolution. But for months, Iran faced widespread unrest, ranging from separatist attacks, worker revolts and internal power struggles. Police reported for work but not for duty, allowing chaos to unfold, including for Marxist students to briefly seize the U.S. Embassy.

In this power vacuum, then-President Jimmy Carter allowed the shah to seek medical treatment in New York. That lit the fuse for the Nov. 4, 1979, takeover by students, who initially planned a sit-in at the embassy.

But the situation quickly spun out of their control.

Ayatollah Ruhollah Khomeini, the long-exiled Shiite cleric whose return to Iran sparked the revolution, gave his support to the takeover. He would use that popular angle to expand the power of his religiously motivated followers.

Some hostages would be released as the crisis unfolded, while several others who escaped the embassy and found safety with Canada's ambassador, left Iran via a CIA-planned escape - dramatic moments that were recounted in the 2012 film "Argo."

Another 52 American hostages would be held for 444 days until the inauguration of President Ronald Reagan when they were freed.

The anniversary comes as Iran appears poised to announce it was breaking another limit imposed by the 2015 nuclear deal, which saw Tehran limit its enrichment of uranium in exchange for the lifting of economic sanctions. Already, Iran has gone beyond its enrichment and stockpile limitations and has begun using arrays of advanced centrifuges prohibited under the accord.

Ali Akbar Salehi, the head of the Atomic Energy Organization of Iran, reportedly traveled to the country's Natanz enrichment facility on Monday ahead of the announcement.

The collapse of the nuclear deal coincided with a tense summer of mysterious attacks on oil tankers and Saudi oil facilities that the U.S. blamed on Iran. Tehran denied the allegation, though it did seize oil tankers and shoot down a U.S. military surveillance drone.

The U.S. has increased its military presence across the Mideast, including basing troops in Saudi Arabia for the first time since the aftermath of the Sept. 11, 2001 terror attacks. Both Saudi Arabia and the neighboring United Arab Emirates are believed to be talking to Tehran through back channels to ease tensions.