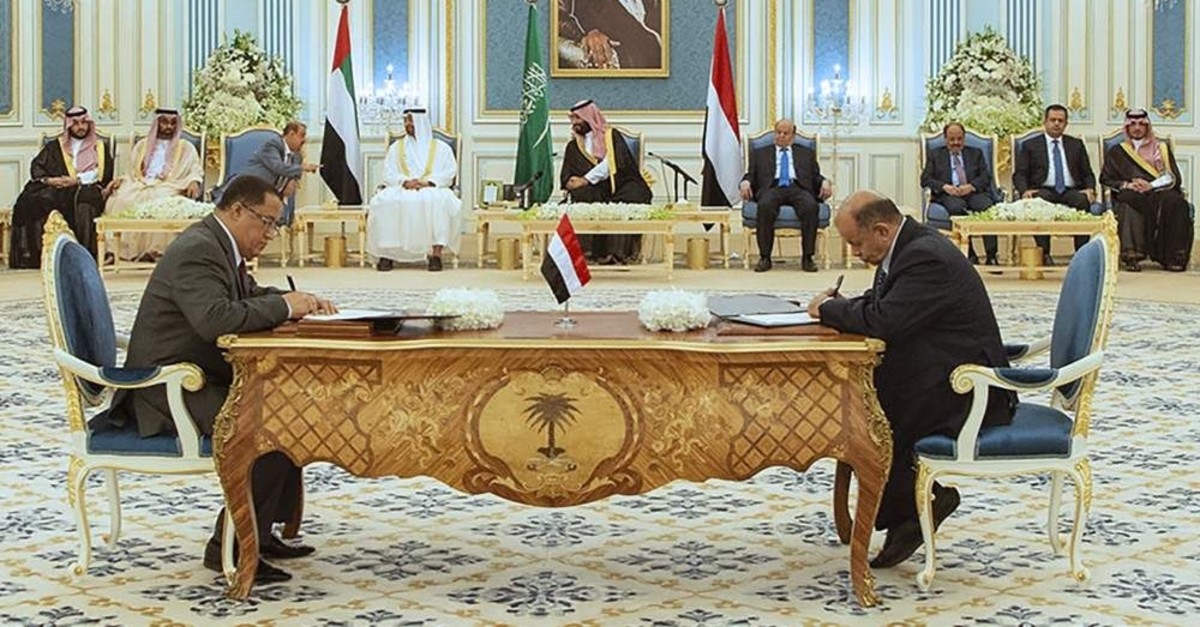 Unrest in the south, which saw secessionist forces seize control of Yemen's interim capital Aden, distracted the Saudi-led coalition from its battle against Houthi rebels and raised fears the country could fall apart entirely.

"This agreement will open a new period of stability in Yemen. The kingdom of Saudi Arabia stands with you," Saudi Crown Prince Mohammed bin Salman said at a signing ceremony in Riyadh aired on state television.

The deal will reportedly see the secessionist Southern Transitional Council (STC) handed a number of ministries, and the government return to Aden, according to officials and reports in Saudi media.

The UN special envoy for Yemen, Martin Griffiths, congratulated the two sides on the deal which he said would propel efforts to end the wider civil war that has devastated the country.

"The signing of this agreement is an important step for our collective efforts to advance a peaceful settlement to the conflict in Yemen," he said in a statement.

"Listening to southern stakeholders is important to the political efforts to achieve peace in the country."

Security Belt Forces -- dominated by the STC -- in August took control of Aden, which had served as the beleaguered government's base since it was ousted from the capital Sanaa by Iran-backed Houthi rebels in 2014.

The clashes between the separatists and government forces, who for years fought on the same side against the Houthis, had raised fears the country could split apart with disastrous effects.

The warring factions in recent weeks held indirect talks mediated by Saudi Arabia in the kingdom's western city of Jeddah, which culminated in the deal signed in Riyadh.

Analysts said the deal prevented the violent disintegration of Yemen but that secessionist sentiment could resurface in the future.

"In the short term, the agreement will allow the coalition to stick together and focus their efforts on fighting the Houthis instead of each other," said Elisabeth Kendall, senior research fellow at Oxford University.

"In the long term, it simply kicks the can down the road on southern secession. Southern ambitions won't just go away. The question is, can they be temporarily reined in."

The military coalition led by Saudi Arabia and the United Arab Emirates (UAE) intervened in Yemen in 2015 as the Huthi rebels closed in on Aden, prompting Hadi to flee into Saudi exile.

The conflict has since killed tens of thousands of people -- most of them civilians -- and driven millions more to the brink of famine in what the United Nations calls the world's worst humanitarian crisis.

The south was an independent state before being forcibly unified in 1990, and the STC has said it wants to regain its lost status.

The separatists have received support and training from the UAE, even though it is a key pillar in the Saudi-led coalition.

The mistrust between the allies has posed a headache for regional powerhouse Saudi Arabia, which remains focused on fighting the Huthis who are aligned with Riyadh's archfoe Iran.

The Huthis have offered to halt all attacks on Saudi Arabia as part of a wider peace initiative, later repeating their proposal despite continued airstrikes from the Saudi-led coalition.

The offer came after the Huthis claimed responsibility for attacks on September 14 against two key Saudi oil installations that temporarily knocked out half of the OPEC giant's production.

Riyadh and Washington, however, blamed Iran for the attacks -- a charge denied by Tehran.