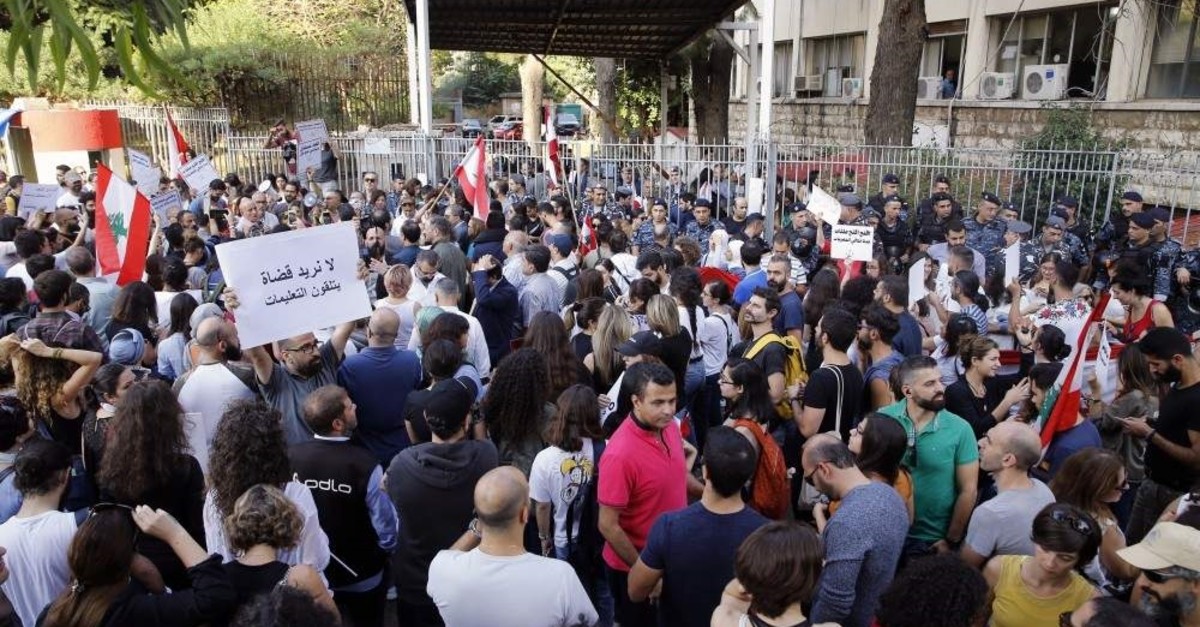 Lebanese anti-government protesters began staging different types of demonstrations as they exert pressure on the president to form a new government and overhaul a political system deemed plagued with corruption.
Yesterday, protesters in Beirut blocked entrances to phone, electricity and water companies as they urged people not to pay their utility bills. Meanwhile, students from universities and schools across the country refused to attend classes and joined the protests at government offices and public institutions.

Protesters blocked entrances to the Justice Palace, where most courts are located in the capital. "We want a clean judicial system away from politics," protesters chanted in front of the building. "We want our country free of corruption," read one placard held by the students at the palace.

Sparked on Oct. 17 by a proposed tax on free calls made through messaging apps such as WhatsApp, the protests have morphed into a cross-sectarian street mobilization against a political system seen as corrupt and broken.
On Tuesday, army troops manage to reopen all significant roads which were blocked for the past 20 days by the protesters. The government is dominated by pro-Iran factions allied with Hezbollah, the most powerful armed group in the country.
Lebanese protesters have only rarely called out Iran and its main local ally, the militant Hezbollah group, but they have focused much of their rage on the country's president and foreign minister, who come from a Christian party closely allied with Hezbollah.

Last week, Prime Minister Saad Hariri submitted his resignation to President Michel Aoun, bowing to one of the protesters' key demands. But Aoun has not yet designated someone to form a new government.
Earlier, Hariri announced a package of economic reforms in an attempt to quell the mass protests and growing anger against his cabinet. The plan includes steps to cut Lebanon’s huge deficit by slashing salaries of politicians by half and giving financial help to families in poverty.
However, protesters who have stayed on the streets wanted more and continued calling for the resignation of the government and the overthrow of the political class that has dominated the country since its 1975-1990 civil war.