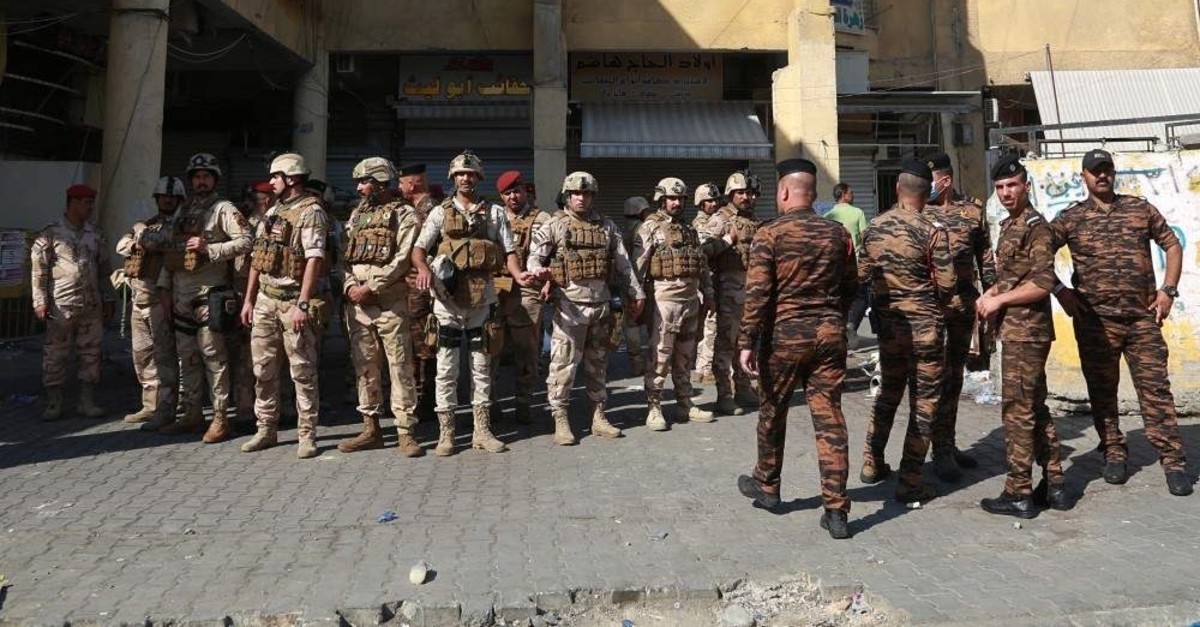 Security forces gather near Iraq's central bank in Baghdad, Iraq, Wednesday, Nov. 6, 2019. Iraqi security forces deployed in large numbers around the bank and began evacuating employees from the building. The protesters did not appear to be heading toward the bank itself. (AP Photo/Khalid Mohammed)
by Daily Sabah with Agencies Nov 06, 2019 10:54 pm

Iraqi security forces fired live ammunition at protesters in the capital yesterday as mass rallies have continued across the country amid violence that has left nearly 280 dead in two waves of demonstrations since Oct. 1.
Around 120 people have died since protests resumed on Oct. 24, as officials have stopped giving precise tolls in recent days. The initial six-day wave of rallies in early October left 157 dead, most of them protesters shot dead in Baghdad by "unidentified snipers," a government probe found.

Security forces resumed their use of live rounds in the capital since Monday, after nearly two weeks of using volleys of tear gas, but no firearms, to push back protesters.
Security forces shot dead at least 13 protesters on Tuesday. Two more Iraqi protesters have been killed in renewed clashes in the Shiite holy city of Karbala, a flashpoint in weeks of anti-government demonstrations. Four more people died yesterday from injuries sustained at earlier protests over the past week, medical sources said.

The escalation is part of a civil disobedience campaign waged by protesters to pile pressure on the Iraqi government to deliver several key demands. Since Thursday, demonstrators have staged a sit-in outside Umm Qasr Port, a key port in the oil-rich southern province of Basra. Dozens of demonstrators yesterday blocked roads leading to oil fields in southern Iraq as part of the weeks-long protests gripping the country.
The protesters blocked the tankers that transport fuel to gas stations from entering the Nassiriya oil refinery, causing fuel shortages across Dhi Qar province. Under-fire Prime Minister Adel Abdul-Mahdi warned on Tuesday that interfering with oil production would harm the country's struggling economy.

The protests are the largest since the Iraqi government was formed in 2018, barely a year ago. Iraq, which is deeply divided along sectarian lines, has been ruled and dominated by Iran-backed Shiite governments. Sunni activists and demonstrations have largely been silenced on grounds of terrorism. Yet this time, Shiites have joined those on the streets, increasing the government's frustration.

Iraq is governed by a sectarian political system that distributes power and high offices among the country's Shiite majority, as well as Sunnis and Kurds. It holds regular elections, but these are dominated by sectarian religious parties, many of which have close ties to Iran. Political parties vie for control of ministries and subsequently hand out jobs to their supporters, contributing to a bloated public sector that is unable to provide reliable public services.

More than 15 years after the U.S.-led invasion that overthrew Saddam Hussein, Baghdad and other cities still see frequent power cuts, the tap water is undrinkable and public infrastructure is crumbling. Few Iraqis have seen any benefit from the country's oil wealth, despite the country constituting the OPEC member with the fourth-largest proven oil reserves in the world.