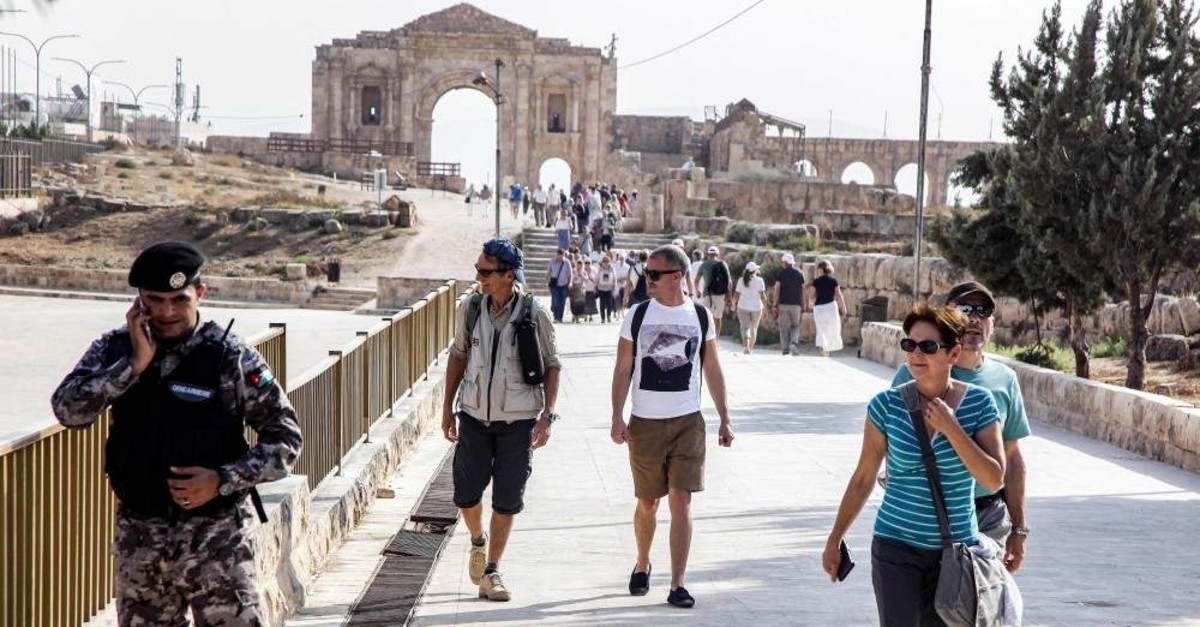 This picture taken on November 6, 2019 shows a view of the scene where several people, including tourists along with a Jordanian tour guide and a security officer, were wounded in a knife attack in the site of Jerash, Jordan. (AFP Photo)
by Compiled from Wire Services Nov 06, 2019 6:20 pm

Eight people were wounded in a knife attack yesterday at the famed archeological site of Jerash in northern Jordan as four tourists, a local guide, a bus driver and two security guards were stabbed "by a man dressed in black militant gear," according to local sources.
"Around noon, a man attacked tourists, a tour guide and a security officer who tried to stop him in Jerash," a popular attraction 50 kilometers (30 miles) from the capital Amman, a spokesman for the Public Security Directorate said in a statement. "The wounded were transported to hospital for treatment" and "the assailant was immediately arrested," he added. Two of the tourists were in critical condition, according to a report by Almamlaka TV. He did not specify the nationality of the attacker or of those wounded, nor give details on the severity of their injuries.
The Roman ruins at Jerash are one of Jordan's main tourist draws after the ancient desert city of Petra. Tourism is a mainstay of the Jordanian economy.
It is not the first time tourist sites have been targeted by attacks in Jordan. In December 2016, at Karak, home to one of the region's biggest Crusader castles, 10 people were killed in an attack that also left 30 wounded. The attack was claimed by the Daesh terrorist group. Ten people were ultimately sentenced for carrying out the attack.