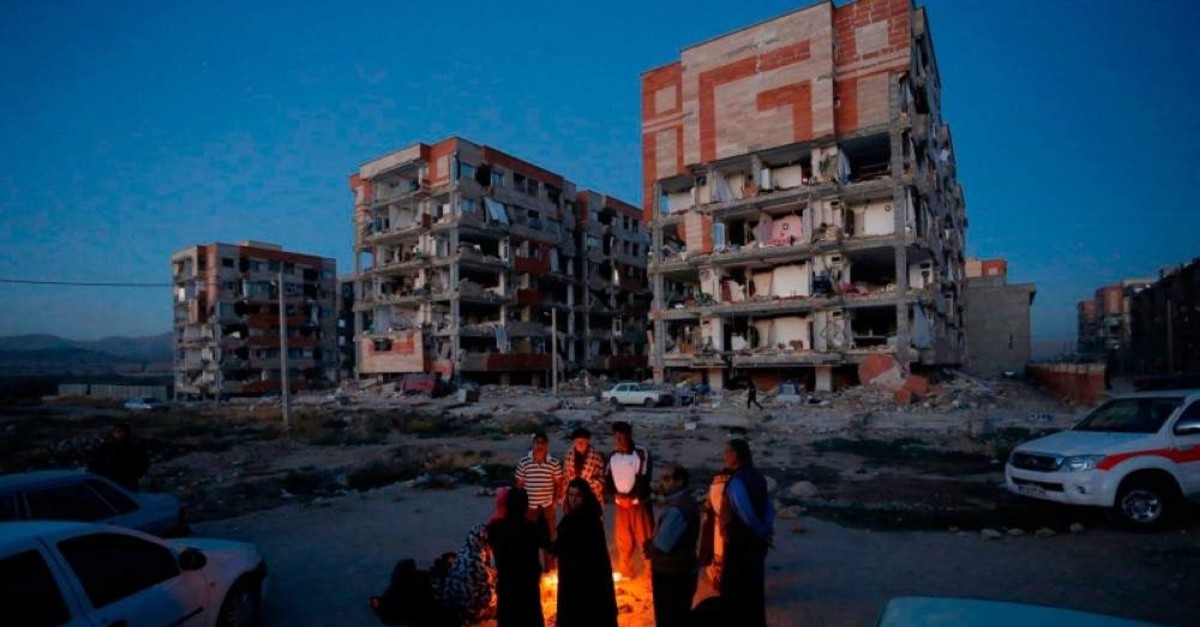 Residents huddle by a fire in an open area following a 7.3-magnitude earthquake at Sarpol-e Zahab in Iran's Kermanshah province on November 13, 2017 (AFP File Photo)
by Compiled from Wire Services Nov 08, 2019 8:29 am
A magnitude 5.9 earthquake struck northwestern Iran early Friday, killing at least five people and injuring over 300 others, officials said.
The temblor struck Tark county in Iran's Eastern Azerbaijan province at 2:17 a.m., Iran's seismological center said. The area is some 400 kilometers (250 miles) northwest of Iran's capital, Tehran.
Over 40 aftershocks rattled the rural region nestled in the Alborz Mountains, and residents rushed out of their homes in fear. The quake injured at least 312 people, state television reported, though only 13 needed to be hospitalized. It described many of the injuries happening when people fled in panic.
The head of Iran's emergency medical services, Pirhossein Koulivand, gave the casualty figures to state television.
There were no immediate video or images broadcast from the area. Rescuers have been dispatched to the region, officials said.
Provincial governor, Mohammad-Reza Pourmohammadi, told local media that at least 30 houses had been destroyed. Rescue operations were underway in 41 rural villages, but the damage was largely concentrated in two areas.
The U.S. Geological Survey said the quake's epicenter was at a depth of 10 kilometers (6.2 miles). Shallow earthquakes tend to cause more damage.
Iran sits where two major tectonic plates meet and experiences frequent seismic activity. The country has suffered a number of major disasters in recent decades, including at the ancient city of Bam, which was decimated by a catastrophic earthquake in 2003 that killed at least 31,000 people. In 1990, a 7.4-magnitude quake in northern Iran killed 40,000 people, injured 300,000 and left half a million homeless, reducing dozens of towns and nearly 2,000 villages to rubble. Iran has experienced at least two other significant quakes in recent years -- one in 2005 that killed more than 600 people and another in 2012 that left some 300 dead.
Last Update: Dec 20, 2019 1:32 am
RELATED TOPICS