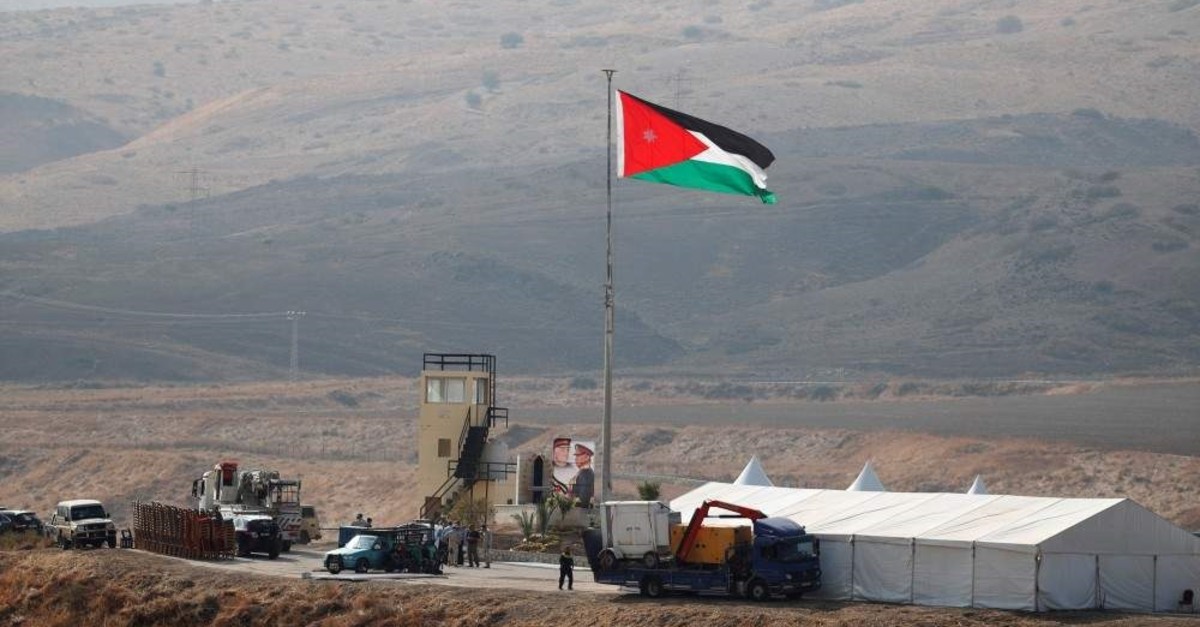 A Jordanian national flag is lifted near a tent in an area known as Al-Baquora, on the Jordanian side of the border with Israel, as seen from the Israeli side, Nov. 10, 2019. (Reuters Photo)
by Compiled from Wire Services Nov 10, 2019 2:46 pm
Jordan's king on Sunday announced "full sovereignty" over two pieces of land leased by Israel, ending a 25-year arrangement spelled out in the countries' landmark peace agreement.
King Abdullah II said in a speech to the government's new Cabinet on Sunday that Jordan would end the "annex of the two areas, Ghumar and Al-Baqoura, in the peace treaty and impose our full sovereignty on every inch of them."
Israel, which has controlled the lands for over 70 years, had been permitted to lease the areas under the 1994 peace agreement.
One of the areas, a popular visitors' site in northern Israel, is known in Hebrew as the "Peace Island." But with relations cool, Abdullah announced earlier this year that he would end the lease.
Opinion polls have repeatedly found that the peace treaty with Israel is overwhelmingly opposed by Jordanians, more than half of whom are of Palestinian origin.
In 1997, a Jordanian soldier opened fire at a group of Israeli schoolgirls touring the so-called "Peace Island" at Naharayim, killing seven and prompting then-King Hussein to conduct condolences visits with the families.
In 2017, an Israeli embassy security guard in Amman killed two Jordanians.
Three years earlier, an Israeli soldier at a border crossing killed a Jordanian judge he deemed a threat.
Just last month, Amman recalled its ambassador from Israel over the prolonged detention without trial in the Jewish state of two Jordanians. The ambassador returned after the two were released.