Palestinian says he was tortured before Israeli police shot him 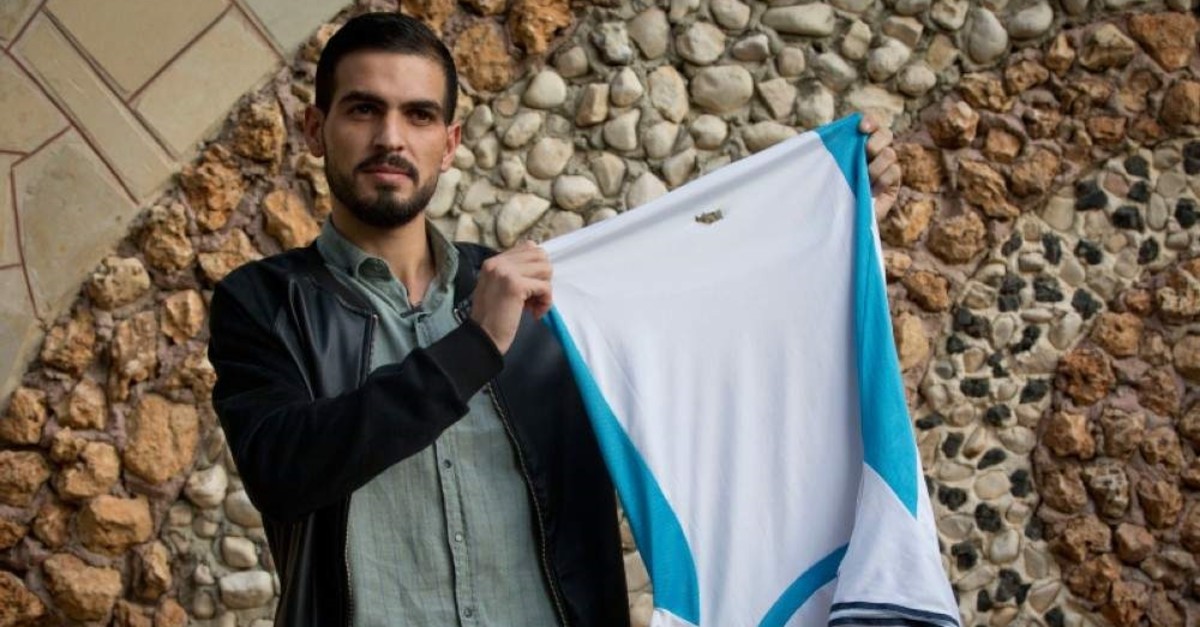 Palestinian Karam Qawasmi, who was shot in the back by Israeli forces in an incident caught on video last year, holds up the shirt he was wearing when he was shot, in the garden of his house, in the West Bank city of Hebron, Sunday, Nov. 10, 2019. (AP Photo)
by Associated Press Nov 11, 2019 9:51 am

A young Palestinian man who was shot in the back by Israeli forces in an incident caught on video last year says the footage shows just a small part of what was a horrifying day for him.

Speaking to The Associated Press after the video emerged last week, Karam Qawasmi said he was run over by a military jeep, then beaten for several hours before troops released him, only to shoot him in the back with a painful sponge-tipped bullet as he walked away. He said Israeli investigators have never contacted him.

"I died several times that day," he said in an interview at his home in the Israeli-occupied West Bank. "They tortured me in a way that I felt they are killing me. And when they shot me, I felt it's my end. I closed my eyes and prayed."

Palestinians often charge that Israeli security forces use excessive or unnecessary force against them. But incriminating video evidence is rare, making such claims hard to prove.

Israel captured the West Bank in the 1967 Mideast War and has kept it under military occupation for over 50 years. While the Palestinian Authority has limited autonomy in parts of the territory, Israel wields overall security control.

The incident occurred a year and a half ago, but only came to public attention last week, when Israel's Channel 13 TV broadcast a leaked video of the shooting, allegedly carried out by a member of the Israeli paramilitary border police unit.

In the video, a woman is heard screaming at a young Palestinian man to "get out of here" as he slowly walks away with his hands in the air. A male voice tells him to lower his hands as the woman again shouts at him. Some 20 seconds later, a shot is heard as the man crumples to the ground, screaming in pain.

The shooter is not seen in the video, which appears to have been taken by a member of the security force.

He said he had recently completed his accounting studies at a technical college. With few jobs available in the West Bank, he set out from his home in Hebron to the West Bank town of Azayim, outside of Jerusalem, in hopes of finding work at a gas station.

After a meeting at the station, he was walking back toward a checkpoint when he says a military jeep pulled up and struck him, tossing him several meters. Border police officers jumped out of the vehicle and grabbed him, he said.

"They took me into the jeep. They handcuffed me and drove me to a nearby tunnel and started beating me up," he said. "They twisted my arms, hit me with their hands, boots and guns all over my body."

He said he was carrying a small bag with work clothes, but Qawasmi, who does not speak much Hebrew, says he thinks the forces suspected he was armed with a knife.

"I recognized some words, like 'knife,'" he said. "I thought they are going to kill me and leave a knife next to my body." He said a crowd of policemen beat him up, as one officer recorded it on a mobile phone.

One female officer was especially aggressive. "She twisted my arms to my back and made me kneel in a very painful way," he said. Another female officer stood and watched, he said.

After more than three hours, Karam said the forces gave him his ID card and ordered him to leave.

"I walked, and when I looked back I saw three soldiers pointing their guns at me," he said. "I was terrified. I walked slowly, and my heart was beating quickly. One shot me, I was hit in the back. I fell down and thought I'm dying. I started praying and closed my eyes."

A soldier rushed to him and told him to leave. "I stood up terrified and walked. I kept walking for more than an hour," he said.

Israeli forces often use sponge-tipped bullets to disperse crowds. The bullets are meant to not be lethal, though they are fired at high velocity and can be extremely painful.

Qawasmi said he eventually made it to a nearby Palestinian village where he changed his clothes and continued back to Hebron. "I went to the hospital for a checkup. There were bruises everywhere. The rubber bullet hit the end of the spine," he said.

He said he recovered at home for a month and suffered nightmares and physical pain for many months afterward. He showed off what he said was the white Adidas T-shirt he wore that day, with a hole in the back where the bullet hit him.

Since the video was broadcast, Qawasmi has become a bit of a local celebrity. During the interview, he took a call from an Israeli lawyer offering to represent him. Several people approached him at a restaurant, some jokingly asking how much money he now expects from a legal settlement.

Israel's Justice Ministry said last week that it has completed an investigation into the case and will soon announce a final decision on whether to indict officers who were at the scene, including a woman who is believed to have fired the bullet.

Israeli police said the woman was immediately removed from duty after the force became aware of the incident. They said other officers who were at the scene were reassigned.

"This is a case that does not characterize in any way whatsoever the behavior or operations of the Border Police," a statement said.

Qawasmi said he did not file a complaint against the security forces, believing it would make no difference.

Qawasmi, for instance, said Israeli investigators have never asked to question him. Justice officials did not respond to a query as to why Qawasmi has not been interviewed.

In 2016, the Israeli human rights group B'Tselem stopped working with the Israeli military on such investigations, accusing it of whitewashing the cases.

Amit Gilutz, spokesman for the group, said it is common for alleged victims not be interviewed, and rarely are forces seriously punished.

"The only exceptional aspect of this incident is that it was filmed and published," he said.