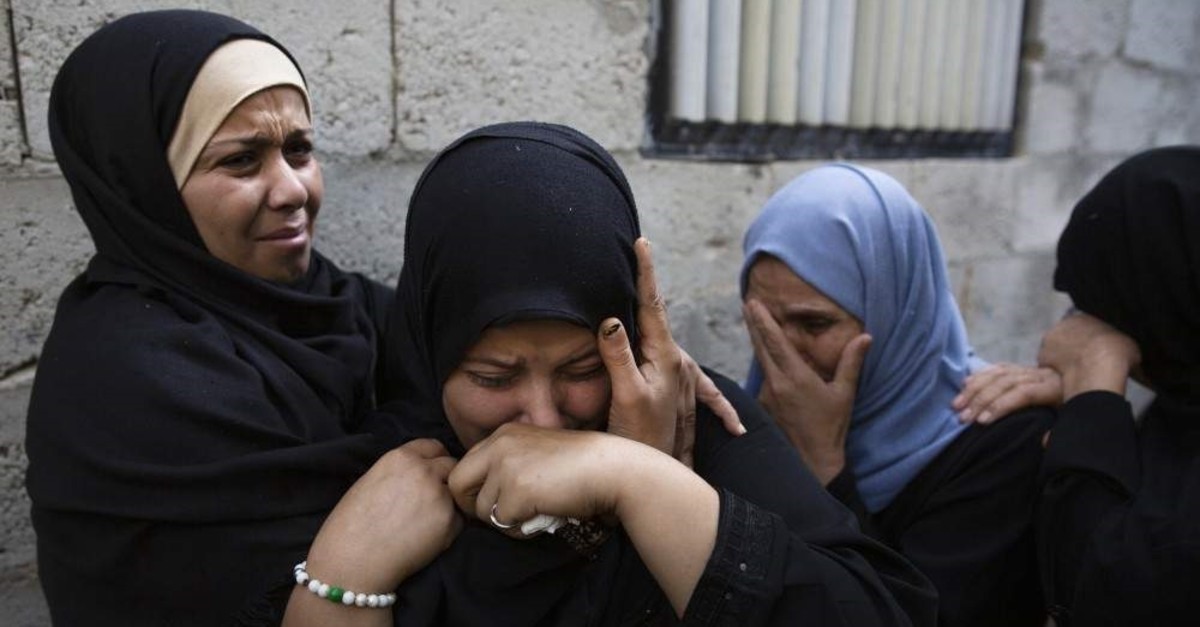 Relatives of Abdullah Al-Belbesi, 26, who was killed in Israeli airstrikes, mourn his death in the family home during his funeral in town of Beit Lahiya, Northern Gaza Strip, Wednesday, Nov. 13, 2019. (AP Photo)
by Associated Press Nov 14, 2019 9:27 am
Gaza’s Islamic Jihad group announced a cease-fire with Israel early on Thursday, ending two days of heavy fighting that left at least 34 Palestinians dead.
Spokesman Musab al-Berim said the Egyptian-brokered deal went into effect at 5:30 a.m.
Israel's foreign minister said, however, that his country intends to continue its policy of targeted killings of Palestinians in Gaza.
"Israel will harm anyone who tries to harm it," Israel Katz told Israeli Army Radio on Thursday.
Al-Berim said the cease-fire was based on a list of demands presented by his group late Wednesday, including a halt to Israeli targeted killings of the group’s leaders. The fighting broke out early Tuesday after Israel killed a senior commander of the group who was said to be behind a string of rocket attacks and who Israel said was believed to be planning a cross-border infiltration. The rare targeted killing by Israel sparked the heaviest fighting with Gaza militants since May. Islamic Jihad fired some 400 rockets toward Israel, while Israel responded with scores of airstrikes.
Palestinian officials reported 34 deaths, including a 7-year-old boy and six members of a single family. The rocket fire crippled life across southern Israel, as nonstop air-raid sirens canceled schools and forced people to remain indoors.
Much of Gaza resembled a ghost-town, with almost no vehicles on the roads except for ambulances evacuating wounded. Despite the continued trickle of rockets after the cease-fire announcement, the Islamic Jihad said it was committed to ending the fighting, saying the fire was likely because word hadn’t spread to all members about the halt to violence.
The Israeli military’s Home Front command tweeted that it was lifting restrictions in certain areas but leaving them in place in the areas surrounding Gaza. In Gaza, cars could be heard back on the streets as the territory appeared to be springing back to life. Israeli military drones could still be heard buzzing overhead.
Late Wednesday, Islamic Jihad’s leader, Ziad al-Nakhalah, announced three conditions for an end to the fighting: an end to targeted killings, a halt in Israeli shootings of protesters at weekly demonstrations along the Israeli border and easing a 12-year-old Israeli blockade that has devastated Gaza’s economy.
Israel imposed the blockade after Hamas received control of Gaza in 2007 from the internationally backed Palestinian Authority.
Last Update: Dec 20, 2019 1:40 am
RELATED TOPICS