Internet restricted in Iran amid protests 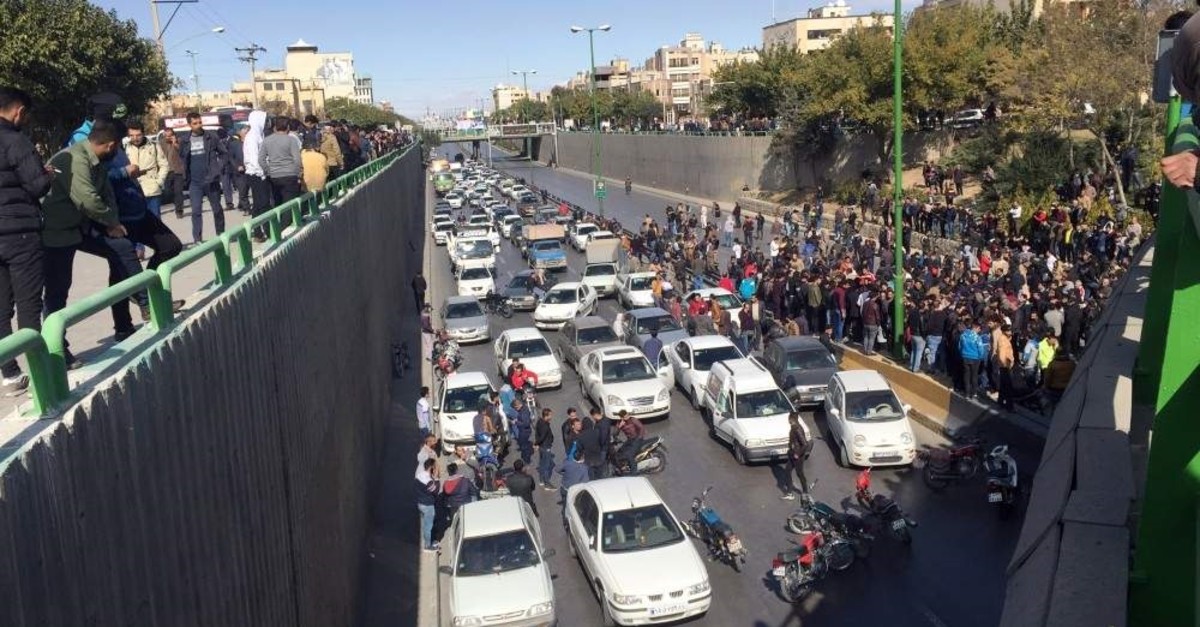 "Access to the internet has been limited as of last night and for the next 24 hours," an informed source at the information and telecommunications ministry said, quoted by ISNA.

The decision was made by the Supreme National Security Council of Iran and communicated to internet service providers overnight, the source added.

It came after state television accused "hostile media" of trying to use fake news and videos on social media to exaggerate the protests as "large and extensive".

Netblocks, a website that monitors online services, said late Saturday that the country was in the grip of an internet shutdown.

"Confirmed: Iran is now in the midst of a near-total national internet shutdown; realtime network data show connectivity at 7% of ordinary levels after twelve hours of progressive network disconnections," it said on Twitter.

Iran’s supreme leader Ayatollah Ali Khamenei on Sunday backed the government’s decision to raise gasoline prices and called angry protesters who have been setting fire to public property over the hike "thugs,” signaling a potential crackdown on the demonstrations.

He made a point to back the decision of Iran’s relatively moderate President Hassan Rouhani and others to raise gasoline prices. Gasoline in the country still remains among the cheapest in the world, with the new prices jumping up to a minimum of 15,000 rials per liter of gas - 50% up from the day before. That’s 13 cents a liter, or about 50 cents a gallon. A gallon of regular gasoline in the U.S. costs $2.60 on average by comparison.

Khamenei ordered security forces "to implement their tasks” and for Iran’s citizens to keep clear of violent demonstrators.

Authorities on Saturday said only one person was killed, though other videos from the protests have shown people gravely wounded.

In an address aired by state television Sunday, Khamenei said "some lost their lives and some places were destroyed,” without elaborating.

In the meantime 40 people have been arrested in the central Iranian city of Yazd after clashing with police during protests against a petrol price hike, the semi-official ISNA news agency reported Sunday.

Those detained were "disruptors" accused of carrying out acts of vandalism and most of them were not locals, ISNA quoted the province's public prosecutor Mohammad Hadadzadeh as saying.

"Following the change in petrol prices some people voiced their opposition with calm gatherings, but then some who were mostly non-native and non-Yazdi carried out acts of vandalism with ill-intent in some parts of Yazd city," he said.

ISNA did not specify when the arrests were made, only saying they were carried out recently.
An Iranian policeman died in clashes with gunmen in western Iran on Sunday amid protests against a government decision to raise fuel prices, according to the official IRNA news agency.
A police major was injured in clashes with "rioters and thugs" while defending his police station from attackers in the city of Kermanshah on Saturday and later died of his wounds, provincial police chief Ali Akbar Javidan said.
Major Iraj Javaheri died of his wounds a day after a confrontation with armed attackers in the western city of Kermanshah on Saturday, provincial police chief Ali Akbar Javidan said, cited by IRNA.
The officer was "martyred in a confrontation with a number of rioters and thugs", Javidan said.

The protests erupted hours after it was announced the price of petrol would be increased by 50% for the first 60 liters and 300% for anything above that each month.

The tensions in Iran came as weeks of anti-government protests have engulfed Iraq and Lebanon, two Mideast nations that are home to Iranian proxies and crucial to Tehran’s influence abroad.

Iran has long suffered economic problems since its 1979 "Islamic Revolution" cut off the country’s decades-long relationship with the U.S. Iran’s eight-year war with Iraq in the 1980s followed, further straining its economy.

The collapse of the recent nuclear deal has exacerbated those problems. The Iranian rial, which traded at 32,000 to $1 at the time of the accord, fell to 122,600 to $1 in trading on Saturday. Iran has since begun breaking terms of the deal as it tries to force Europe to come up with a way to allow it to sell crude oil abroad despite American sanctions.

The U.S. so far has had only a muted response to the protests, with U.S. Secretary of State Mike Pompeo tweeting overnight: "As I said to the people of Iran almost a year and a half ago: The United States is with you.”

In Dubai, the new U.S. ambassador to the United Arab Emirates (UAE) told The Associated Press that America was "not advocating regime change. We are going to let the Iranian people decide for themselves their future.”

"They are frustrated. They want freedom,” Ambassador John Rakolta said at the Dubai Airshow. "These developments that you see right now are their own people telling them, ‘We need change and to sit down with the American government.’”