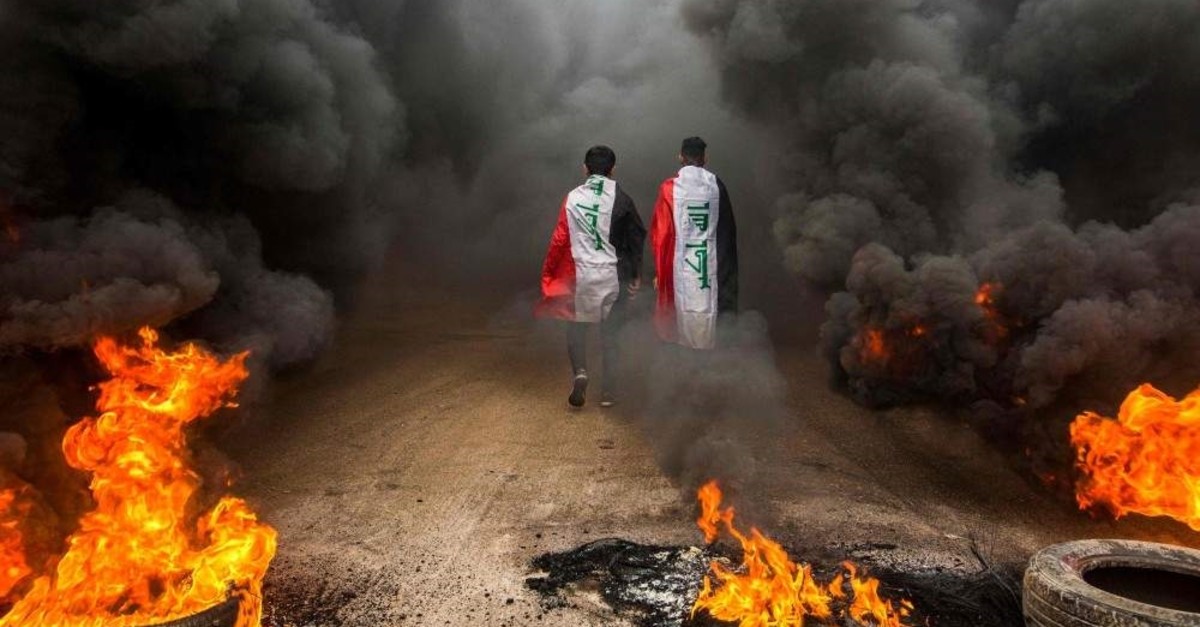 Anti-govt protesters draped in Iraqi national flags walk into clouds of smoke from burning tires during a demonstration in Basra on Nov. 17, 2019 (AFP Photo)
by Daily Sabah Nov 18, 2019 9:34 am
A trove of leaked Iranian cables recently revealed by The New York Times in collaboration with The Intercept exposes how Iran and the U.S. exploited Iraq in their “spy games,” and how the former “outmaneuvered the U.S. in the contest for influence.”
The leaked intelligence documents from 2014 and 2015 show how Tehran tried to infiltrate Iraqi political affairs through work of Iranian spies.
“The unprecedented leak exposes Tehran’s vast influence in Iraq, detailing years of painstaking work by Iranian spies to co-opt the country’s leaders, pay Iraqi agents working for the Americans to switch sides and infiltrate every aspect of Iraq’s political, economic and religious life,” The NYT report said.
Citing the cables, the report says that Iranian spies organized meetings in shopping malls, dark alleyways or at birthday parties and hunting excursions.
“The leaked cables offer an extraordinary glimpse inside the secretive Iranian regime. They also detail the extent to which Iraq has fallen under Iranian influence since the American invasion in 2003, which transformed Iraq into a gateway for Iranian power, connecting the Islamic Republic’s geography of dominance from the shores of the Persian Gulf to the Mediterranean Sea.”
The report notes that Iranian officials admitted that surveillance of U.S. activity in Iraq after the invasion is critical for Tehran and the country’s national security, as they thought Iran would be the next on Washington’s list of invasion.
The anonymous source who leaked the cables told The Intercept that they revealed the documents because they wanted to “let the world know what Iran is doing in my country Iraq.”
Describing Iranian spies in Iraq as professional and pragmatic, the report said their main goal in the country was to prevent it from breaking apart, preventing the formation of an independent Kurdistan that would pose a threat to regional stability and Iran’s territorial integrity, and preventing sectarian warfare to protect Shia Muslims.
Last Update: Dec 20, 2019 1:45 am
RELATED TOPICS