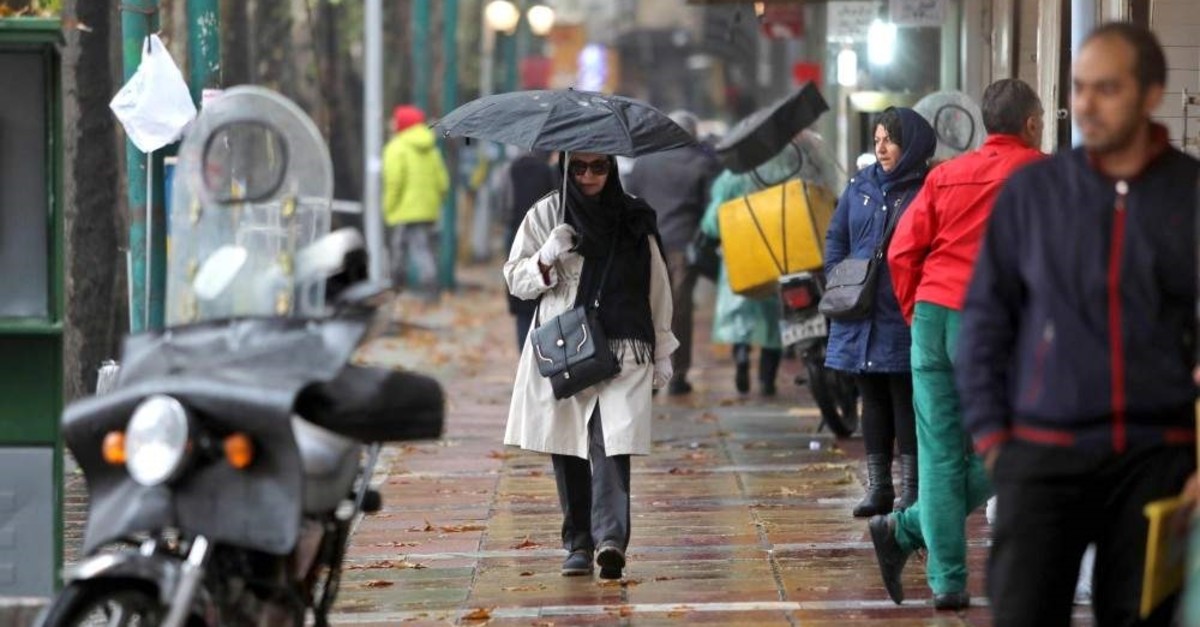 People walk past stores in the Tajrish Bazaar in Tehran, Iran, Nov. 18, 2019. (AFP Photo)
by Compiled from Wire Services Nov 19, 2019 11:33 am
Protests in Iran triggered by petrol price hikes last week have subsided, an Iranian judiciary spokesman said on Tuesday, a day after the elite Revolutionary Guards warned of "decisive" action if anti-government protests do not cease.
Social media videos posted in defiance of an Internet block showed protests continued in several cities on Monday night, however, and a heavy presence of security forces in streets. The images posted on social media could not be verified by Reuters.
"Calm has been restored in the country," Iran's judiciary spokesman Gholamhossein Esmaili told a news conference.
Several people, including members of the security forces and police, have been killed in the protests that began on Friday after fuel price rises of at least 50% were announced, and around 1,000 "rioters" arrested, authorities said.
Three members of the Iranian security forces have been stabbed to death by "rioters" near Tehran, the ISNA and Fars news agencies reported late Monday.
The assailants wielding knives and machetes ambushed the three — a Revolutionary Guard and two members of the Basij militia — west of the capital, the news agencies reported.
The deaths take to at least five the number of people confirmed to have been killed in the violent demonstrations.
Hundreds of young and working-class Iranians expressed their anger at squeezed living standards, state corruption and a deepening gap between rich and poor. Social media footage showed protesters burning pictures of top officials and calling on clerical rulers to step down, as well as violent clashes between security forces and protesters.
State TV said funerals will be held for security guards killed in the protests, adding that "thousands of Iranians have staged rallies in several cities to condemn the unrest."
A curb on Internet access imposed at the weekend was still in place, suggesting the clerical rulers are uneasy about possible further protests.
Iran's Supreme Leader Ayatollah Ali Khamenei on Sunday blamed the turmoil on Iran's foreign foes, including the United States, and denounced protesters as "thugs."
On Monday, the powerful Revolutionary Guards warned of "decisive" action if the protests continues, state media reported. The Guards and their affiliated Basij militia quelled unrest in late 2017 in which at least 22 people were killed.
The United States, which quit an international nuclear deal with Iran last year and reimposed sanctions, has condemned Tehran for using "lethal force" and curbing the internet.
Frustration has grown over a sharp currency devaluation and spikes in prices of bread, rice and other staples since Washington began to apply "maximum pressure" on Iran to make nuclear and security concessions.
The government said the price rises were intended to raise around $2.55 billion a year for extra subsidies to 18 million families struggling on low incomes.
State news agency IRNA said handouts to the poor, the most consistent supporters of the clerical establishment, had started on Tuesday.
Last Update: Dec 20, 2019 1:47 am
RELATED TOPICS