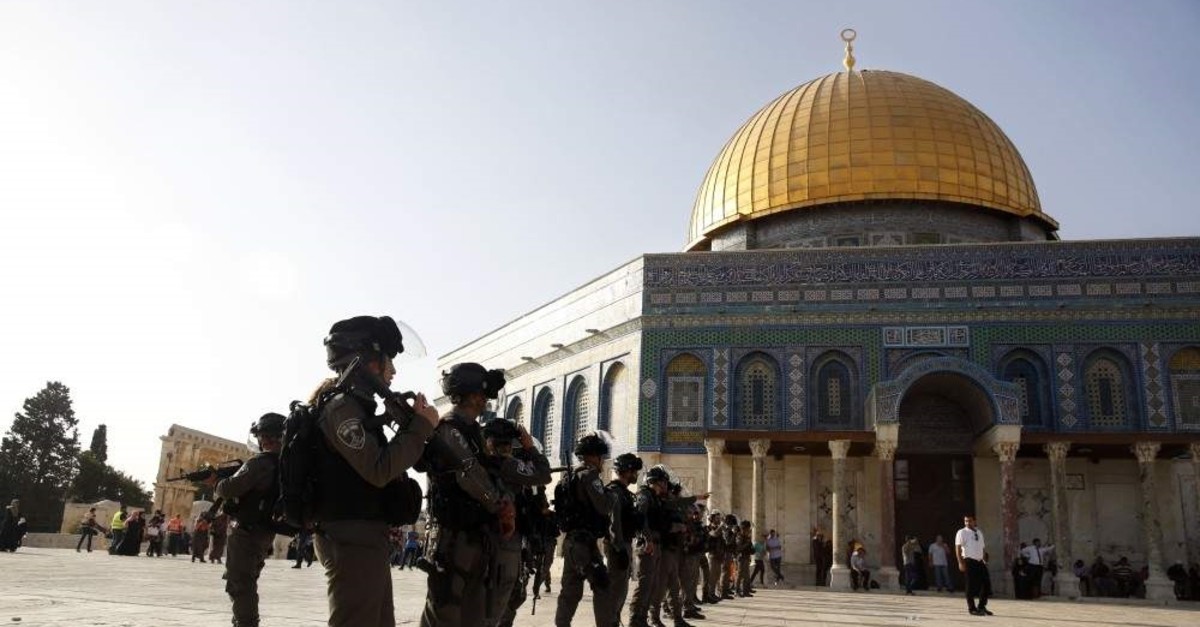 Thousands of Jewish extremist settlers, under tight military protection, forced their way into the Ibrahimi Mosque in the occupied West Bank city of Hebron on Saturday.
The latest event, selected to coincide with the Jewish holiday Chayevi Sarah, is one in a series of violations of Islamic holy sites under the illegal Israeli occupation.

Dozens of Israeli security forces were deployed across the streets of Hebron's old city, preventing Palestinians from approaching the site, according to Anadolu Agency (AA).
Tension has been high in Hebron since Friday, when extremist settlers attacked Palestinian homes in the city, injuring several people.

Revered by both Muslims and Jews, the Ibrahimi Mosque complex is believed to mark the burial sites of the prophets Abraham, Isaac and Jacob. After the 1994 massacre of 29 Palestinian worshipers inside the mosque by Jewish extremist settler Baruch Goldstein, Israeli authorities divided the mosque complex between Muslim and Jewish worshipers. Since then, the Israeli military regularly closes the Ibrahimi Mosque to Muslim worshipers by setting up a “closed military zone” around the mosque and allows extremist Jewish settlers to enter the whole sacred site to observe their rituals with the aim of annexing a large area of it for settler use.
Home to 150,000 Palestinians, Hebron is one of the most volatile cities in the West Bank, land occupied by Israel since 1967. Some 400 religiously-motivated Jewish settlers live in heavily guarded enclaves in the city.

Following the violence, the Palestinian resistance movement, Hamas, called for the defense of Islamic sites in West Bank against Israeli violations while condemning the regular desecration of the Ibrahimi Mosque and the Al-Aqsa Mosque by Israeli settlers.
Hamas spokesman Fawz Barhoum described the continuous Jewish attacks as “part of the religious war being waged by the Israeli regime on the Palestinian people and their holy sites,” in a statement on Sunday. He also stressed that the violations of the Islamic holy sites would be met with action and resistance while calling on Palestinians to “fight a real battle” with the occupation forces and settlers and defend the holy sites.

Settler raids of Islamic sites have been on the increase. Like the Ibrahimi mosque, Jerusalem's flashpoint Al-Aqsa Mosque compound has been subjected to violent attacks by settlers. Increasing raids of Al-Aqsa Mosque have been reported recently, with 2,233 settlers raiding the Muslim holy site only in July, according to a Palestinian nongovernmental organization (NGO).
"Around 2,233 Jewish settlers guarded by Israeli security personnel stormed the compound in July," the Wadi Hilweh Information Center said in a statement. The NGO said Israeli authorities also banned 14 Palestinians, including two minors and two women, from entering the holy site for different periods in July.

The area which Al-Aqsa is built upon is referred to as Temple Mount by the Jews. It is central to the Israeli-Palestinian conflict and a flashpoint issue, with Palestinians fearing Israel may one day seek to assert further control over the site. It is located in east Jerusalem, which was annexed in 1980 by Israeli forces under the claim that the city serves as the capital of the Jewish state, a move never recognized by the international community. It is the third holiest site in Islam and is the most sacred site in Judaism. Jews are allowed on the premises to visit but not to pray, to avoid provoking tensions.