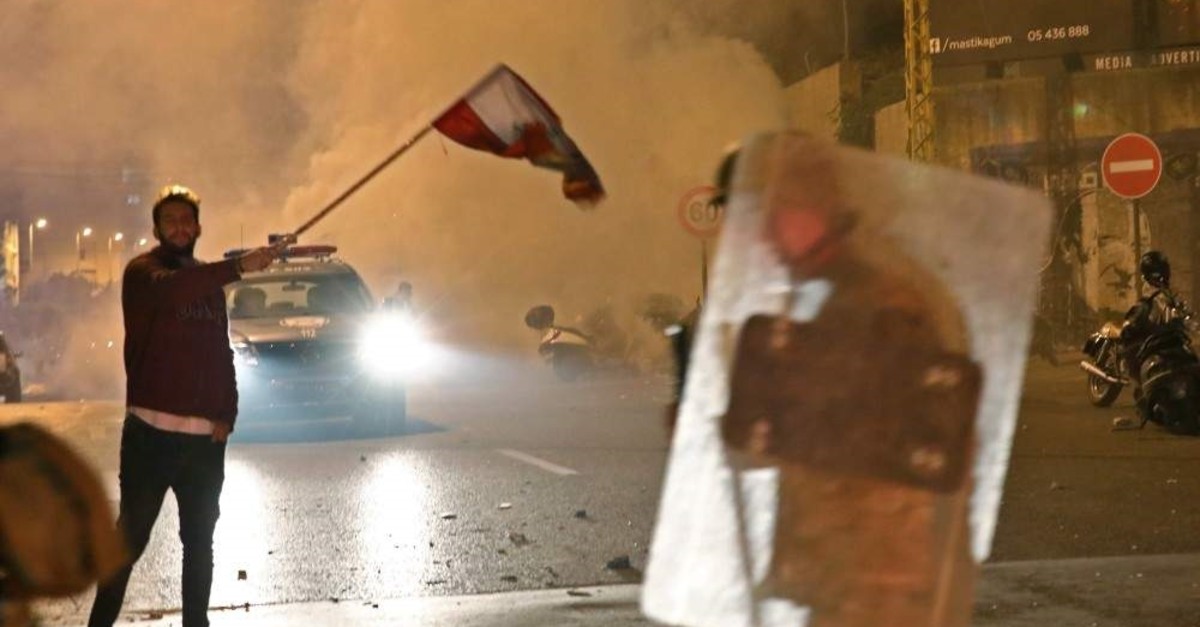 A Lebanese anti-government demonstrator waves the national flag as army and police members deploy after clashes with supporters of Shiite groups Hezbollah and Amal in Beirut, Lebanon, Nov. 25, 2019. (AFP Photo)
by Compiled from Wire Services Nov 25, 2019 11:06 am
Clashes broke out between anti-government demonstrators and supporters of the Shi'ite groups Hezbollah and Amal in the Lebanese capital, Beirut, early on Monday, as tensions escalated when demonstrators blocked a main bridge.
Lebanon has faced five weeks of anti-government protests, fuelled by anger at corruption among the sectarian politicians who have governed Lebanon for decades. Demonstrators want to see the entire ruling class gone from power.
Hezbollah and Amal were both represented in the coalition government led by Prime Minister Saad al-Hariri, who quit on Oct. 29 after the protests began. The heavily armed Hezbollah, which is backed by Iran, had opposed Hariri's resignation.
Army soldiers and riot police formed a barrier separating the protesters from the supporters of the Shi'ite groups on a main road known as the Ring Bridge as both sides threw rocks. Security forces fired tear gas to disperse the crowds, three local television stations reported.
The tensions came after a peaceful day of demonstrations, more than a month into a spontaneous nationwide street movement against the political elite.
Late Sunday, protesters blocked major roads in several parts of the country and called for a general strike the following day in protest at the lack of progress in forming a fresh government.
Earlier, hundreds had gathered in protest centers in Beirut, the northern city of Tripoli and in Tyre.
In Beirut's Martyrs' Square, hundreds of women and men demanded their rights, some waving the national red and white flag or chanting "Revolution, Revolution!"
During the first month of demonstrations, security forces arrested 300 people including 12 minors who were released within 24 to 48 hours, according to the lawyers' committee.
But 11 people — including two minors — remain in detention accused of attacking a hotel in the southern city of Tyre during the first week of the uprising.
The demonstrators managed to bring down the government less than two weeks into the protests, but it remains in a caretaker capacity and no new cabinet has since been formed.
Last Update: Dec 20, 2019 1:54 am
RELATED TOPICS