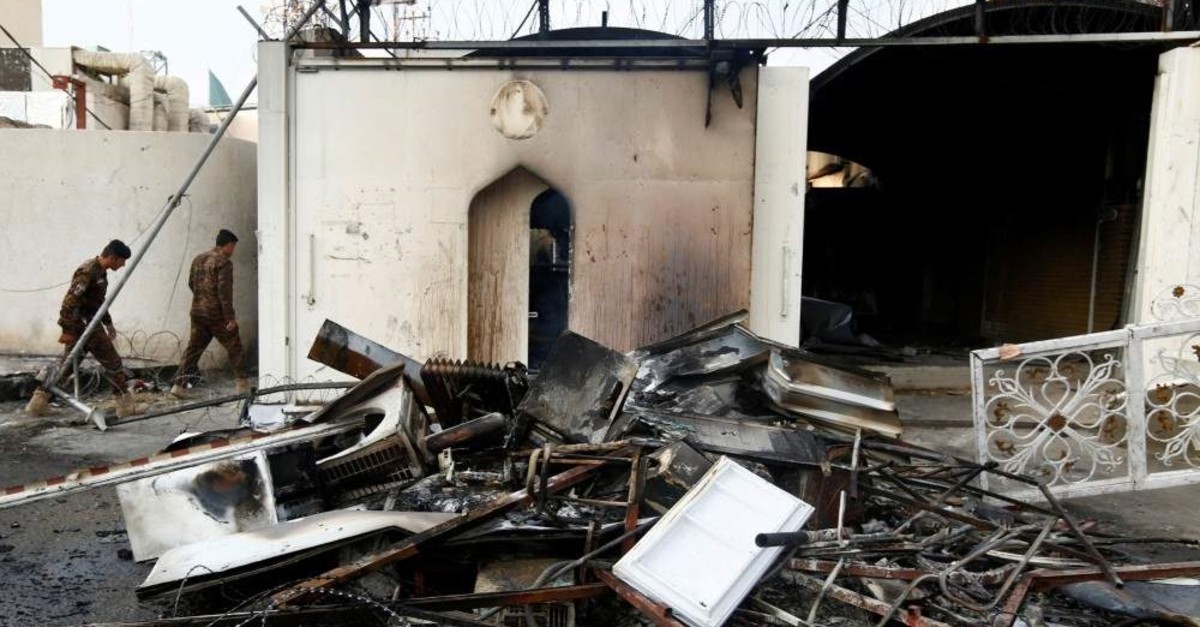 A view of the Iranian Consulate after Iraqi demonstrators stormed and set fire to the building during ongoing anti-government protests in Najaf, Iraq Nov. 28, 2019. (Reuters Photo)
by Compiled from Wire Services Nov 28, 2019 11:37 am
Iraqi authorities on Thursday set up joint military-civilian "crisis cells" to stem unrest after demonstrators burned an Iranian consulate, as the death toll from clashes rose to 13, according to medics and security sources.
Security forces opened fire on protesters who had gathered on a bridge in Nassiriya before dawn, medical sources said. At least 13 were killed and dozens more were wounded in the incident, according to reports.
A curfew was imposed in the southern holy city of Najaf where protesters stormed and set fire to the Iranian Consulate. Businesses and government offices were closed in the city, state media reported.
Security forces were deployed around the edges of the city, searching all cars and people trying to enter, an AFP correspondent said.
The torching of the consulate escalated violence in Iraq after weeks of mass demonstrations that aim to bring down a government seen as endemically corrupt and backed by Tehran.
It was the strongest expression yet of the anti-Iranian sentiment of Iraqi demonstrators, who have taken to the streets for weeks in Baghdad and the Shiite Muslim-majority south. Hundreds have been killed by Iraqi security forces.
Iraqi authorities have set up "crisis cells" in several provinces to try to restore order, a military statement said.
It said the cells would be led by provincial governors but would include military leaders who would take charge of local security and military forces.
The protests, which began in Baghdad on Oct. 1 and have spread through southern cities, are the most complex challenge facing the Shiite-dominated ruling class that has controlled state institutions and patronage networks since the 2003 U.S.-led invasion that toppled long-time Sunni ruler Saddam Hussein.
The protesters are mostly unemployed Shiite youth who demand the departure of Iraq's entire political elite.
Security forces have used live ammunition, tear gas and stun grenades against mostly unarmed protesters. Some demonstrators have lobbed petrol bombs and bricks or fired slingshots at police.
The violence has killed more than 350 people, according to police and medics.
Last Update: Dec 20, 2019 1:59 am
RELATED TOPICS