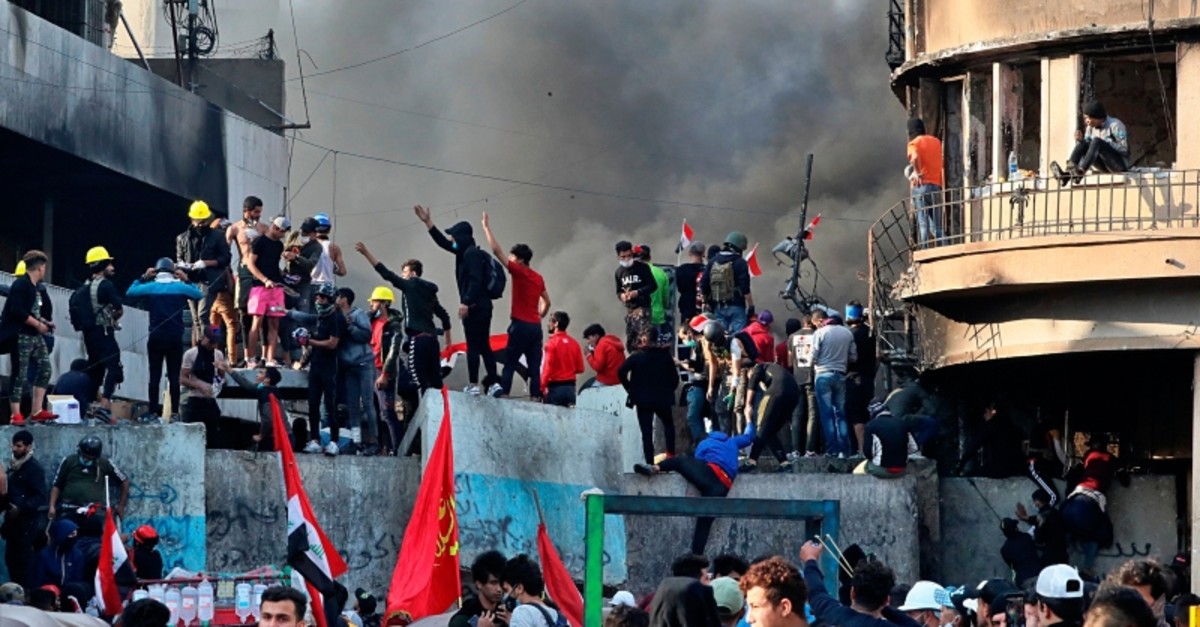 Iraq's embattled premier announced Friday he will resign in keeping with the wishes of the country's top Shiite cleric, after nearly two months of anti-government protests that have cost more than 400 lives.

Adel Abdel-Mahdi's written statement was greeted with cheers and blaring music across Baghdad's iconic Tahrir (Liberation) Square, where crowds have amassed since early October against a ruling class deemed corrupt and inefficient.

"I will submit to the esteemed parliament a formal letter requesting my resignation from the premiership," Abdel-Mahdi wrote, just hours after Grand Ayatollah Ali Sistani called in his weekly sermon on parliament to replace the cabinet.

The sermon set off an avalanche of statements from political figures in support of a no-confidence vote on the government, before the prime minister's announcement.

Celebrations broke out in Tahrir, where young protesters dropped the stones they were preparing to throw at riot police and began dancing, an AFP photographer said.

"It's our first victory and we're hoping for many more," shouted one demonstrator as the three-wheeled tuk-tuk vehicles used to ferry casualties pumped patriotic music into the square.

"It's also a victory for the martyrs who fell," he said.

The grassroots movement is the largest Iraq has seen in decades but also the deadliest, with more than 400 people dead and 15,000 wounded in the capital and Shiite-majority south, according to an AFP tally.

For weeks, Sistani had called for restraint in dealing with demonstrators and urged political parties to get "serious" about reform, but he ramped up demands Friday.

"The parliament, from which this current government is drawn, is asked to reconsider its choice in this regard," he said in Friday's sermon delivered by a representative.

Within minutes, deputy and former premier Haider al-Abadi called on lawmakers to convene Saturday for a "special session for a vote of no-confidence and to form a new independent government."

And the powerful Hashed al-Shaabi paramilitary network, which had backed the government, also appeared to change course.

Its parliamentary bloc, Fatah, called for "the necessary changes in the interests of Iraq."

The sudden turnaround came after one of the bloodiest days of protests yet, with 44 demonstrators killed and nearly 1,000 wounded on Thursday in Baghdad and across the south.

The bloodshed resumed Friday, with two protesters shot dead in the flashpoint city of Nasiriyah and another killed in the shrine city of Najaf.

"The increasing numbers of deaths and injuries cannot be tolerated," said the U.N.'s top official in Iraq, Jeanine Hennis-Plasschaert.

The majority of Thursday's dead fell in Nasiriyah, which counted 26 dead, including two who died Friday, from injuries suffered the previous day.

And in Najaf, a massive funeral procession snaked through the streets carrying coffins of some of the 16 people killed there the previous day.

Clashes erupted there between protesters and armed men dressed in civilian clothes, with volleys of gunfire heard outside political party offices, according to witnesses.

Demonstrators felt emboldened by Sistani's sermon, which was "different than the previous ones," said Ali al-Sunbuli, an activist in Najaf.

The sermon began with a prayer for the protesters who died and then addressed parliament directly, not the cabinet or political parties.

"It's a sign that he doesn't recognize their legitimacy," said Sunbuli.

In Diwaniyah, another hotspot, protester Ahmad al-Badr said that Sistani's speech "was a big push for us."

The unrest in Iraq's south was unleashed after protesters stormed the Iranian consulate in Najaf late Wednesday, accusing the neighboring country of propping up Iraq's government.

Tehran demanded Iraq take decisive action against the protesters, saying it was "disgusted" by developments.

In response, Abdel Mahdi ordered military chiefs to deploy in several provinces to "impose security and restore order" – but chaos reigned instead.

Men in civilian clothes opened fire at demonstrators and tribal fighters deployed in the streets in their defense.

As the death toll climbed late Thursday, the premier sacked the commander he had dispatched to Nasiriyah and the provincial governor based in the city resigned.

Police officers speaking on condition of anonymity told AFP they had received orders Thursday to "finish off" the rallies.

Baghdad and the south have been rocked by the most widespread street unrest since the 2003 U.S.-led invasion that toppled Saddam Hussein.

Protesters are seeking an overhaul of the ruling elite, accused of corruption and embezzling state funds in a country scarred by decades of conflict and where infrastructure is failing.

Iraq is OPEC's second-largest crude producer but one in five Iraqis lives in poverty and youth unemployment stands at 25%, according to the World Bank.

Top Iranian commander Qasem Soleimani last month convinced political factions to back the government, including firebrand cleric Muqtada al-Sadr, who had called on the premier to resign.

But as the tide appeared to turn again, al-Sadr resurfaced Thursday, saying it would "be the beginning of the end for Iraq" if the government did not step down.