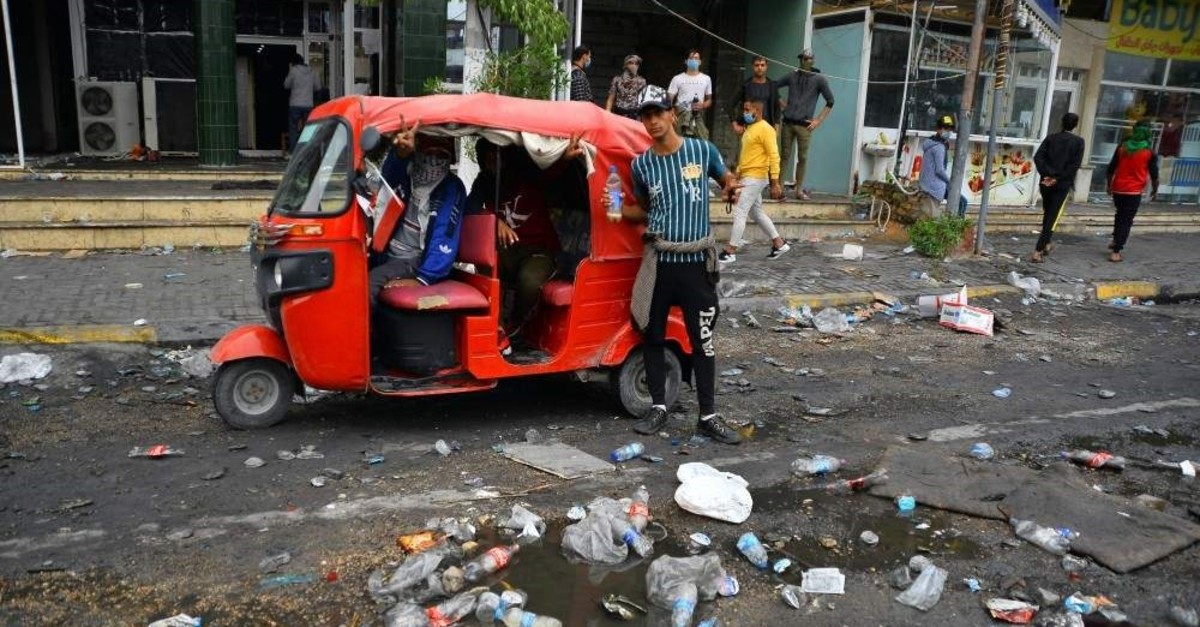 Iraqi demonstrators gesture during a demonstration in the southern Iraqi Shiite holy city of Najaf, Dec. 1, 2019. (Photo by AFP)
by Compiled from Wire Services Dec 01, 2019 4:43 pm

Iraq’s parliament approved the resignation of Prime Minister Adel Abdul-Mahdi on Sunday, amid ongoing violence and anti-government demonstrations in the capital that saw one protester shot dead.

Parliament enacted Abdul-Mahdi’s resignation without putting it to a vote, according to two lawmakers in attendance. Existing laws do not provide clear procedures for members of parliament to recognize the prime minister’s resignation. Lawmakers acted on the legal opinion of the federal supreme court for yesterday’s session.

However, Abdul-Mahdi’s vowed resignation could not satisfy the Iraqi’s demands as protests kept surging the country, just before yesterday’s highly anticipated parliament session that would formally accept Abdul-Mahdi’s resignation.

Angry protesters set fire to the house of the military commander of Dhi Qar province in southern Iraq yesterday, before the eagerly anticipated parliament session that would decide the prime minister’s fate, according to a local police source.

"Hundreds of demonstrators burned the house of Jameel al-Shimmary, who was tasked with handling security in the province," the source, who asked to remain unnamed, told Anadolu Agency.

Prime minister Abdul-Mahdi announced Friday that he would hand parliament his resignation amid mounting pressure from mass anti-government protests, a day after more than 40 demonstrators were killed by security forces in Baghdad and southern Iraq. The announcement also came after Iraq’s top Shiite cleric withdrew his support for the government in a weekly sermon.

Anti-government demonstrators, including students and teachers, also took to the streets in the southern oil-rich city of Basra early yesterday morning. They donned black clothes to mourn protesters killed in Najaf and Dhi Qar provinces in recent days.

Speaking on condition of anonymity, security and medical officials say one protester was killed and 10 wounded in Baghdad’s historic Rasheed Street, when security forces fired live ammunition to prevent crowds from breaching concrete barriers near the Ahrar bridge that leads to Iraq’s parliament and other government buildings.

The country has been rocked by mass protests since early October against poor living conditions and corruption. Protesters' demands later spiraled into calls for dissolving Abdul-Mahdi's government.

In recent weeks, most Sunni-majority areas refrained from protesting, fearing that opposing the central government would earn them the labels of being "terrorists" or supporters of Saddam Hussein.

But after a spike in violence days ago left nearly 70 people dead across three cities, Iraqis in nearly all provinces turned out in solidarity.

During yesterday’s marches, hundreds of students dressed in black organized a mourning march in the northern city of Mosul, on the city's university campus.

According to Iraq's High Commission for Human Rights, at least 406 Iraqis have been killed and 15,000 have been injured since protests began Oct. 1.