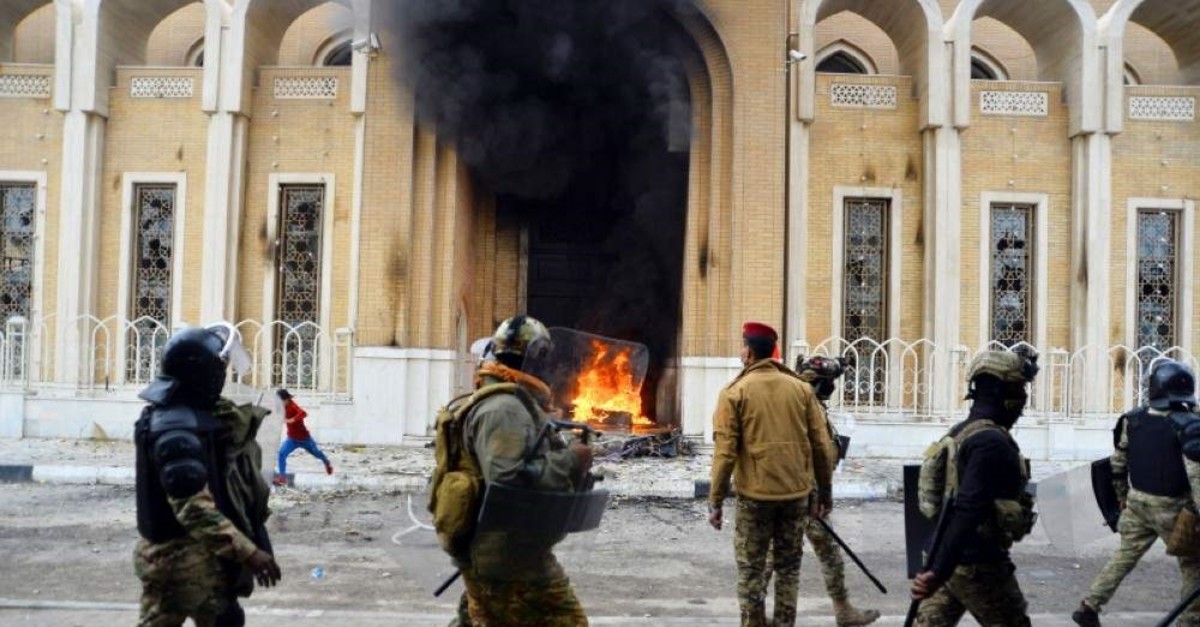 Smoke billows from the shrine dedicated to the late Iraqi Shiite Ayatollah Mohammed Baqir al-Hakim in the southern Iraqi Shiite holy city of Najaf on Dec. 1, 2019, during anti-government demonstrations. (AFP Photo)
by Compiled from Wire Services Dec 04, 2019 10:42 am

Dozens of demonstrators gathered around the Hakim shrine, demanding that populist cleric Muqtada al-Sadr help them enter and symbolically take control, as reported by The Associated Press.

Najaf has been one of the flashpoints in the protest movement, after demonstrators torched the Iranian consulate there on Nov. 27 and again on Dec. 1. The Hakim shrine has been the focus of recent violence. Three protesters were killed and 24 wounded on Saturday as security forces used live rounds to disperse them from the site.

Southern Shiite shrine cities have become the center of the monthslong protests in Iraq as unrest pits disaffected Shiite protesters against a Shiite-dominated government backed by Iran.

For the last two weeks, the center of the protests has not only been Baghdad but also the southern cities, where the Shiite majority lives. Karbala and Najaf have borne the anger of the Iraqis, despite the fact that these cities are accepted as holy sites because the murdered grandson of the Prophet Muhammad, Hussein and some other relatives are buried there. The death toll from anti-government protests has risen to 460 since the leaderless uprising shook Iraq on Oct. 1, according to Iraq's Independent High Commission for Human Rights. "At least 460 protesters were killed in October and November in various central and southern cities, including Baghdad," Ali al-Bayati, a representative of the commission, said in a statement. He stressed that the number of injured protesters exceeded 17,400 and more than 3,000 are permanently disabled as a result of amputation or loss of vision or other injuries.

Iraqis are on the streets regardless of their sect. Both Shiites and Sunnis are protesting the government and accusing it of becoming a puppet of the Iranian regime. Protesters claim that the real death toll is much higher than the figure being given by authorities. The Iraqi government is accused of failing to protect its own people, meet their demands and create balanced relations with Iran. Prime Minister Abdul-Mahdi announced Friday he would resign after a call by Iraq's top Shiite Muslim cleric, Grand Ayatollah Ali al-Sistani, for Parliament to consider withdrawing its support for his government to stem the violence. President Barham Salih met with Iraq’s main political blocs as a 15-day constitutional deadline to name the next prime minister nears, two Iraqi officials said. The Sairoon bloc, led by influential Shiite cleric al-Sadr, addressed Salih in a letter and said they gave protesters the right to support a premier of their choice.