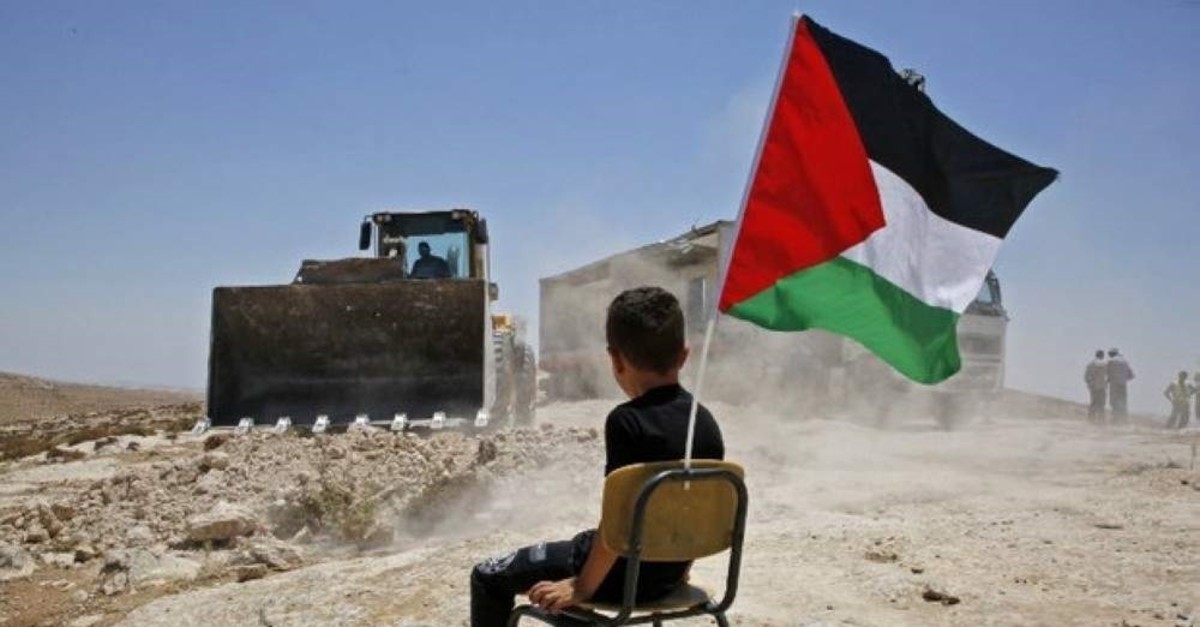 A Palestinian boy sits on a chair with a national flag as Israeli authorities demolish a school site in the village of Yatta, in the occupied West Bank, July 11, 2018. (AFP Photo)
by Daily Sabah Dec 17, 2019 3:49 pm

Defying accusations of possible war crimes in the occupied territories, Israel plans to demolish some 18,000 Palestinian homes in Jerusalem. Such actions have been called a "war crime" by the International Criminal Court (ICC).
“The demolition of the Palestinian homes in occupied Jerusalem comes in the context of Israel’s punitive measures, forced displacement, ethnic cleansing, and the Judaization of the occupied Jerusalem,” the city’s deputy governor, Abdullah Siam said, according to the Middle East Monitor.

Palestinians have long suffered from the ongoing risk of demolition by Israeli forces. In July, Israeli forces began demolishing dozens of Palestinian homes in an East Jerusalem neighborhood, Sur Baher, which sits on either side of the Israeli barrier in East Jerusalem and the Israeli-occupied West Bank, in one of the largest operations of its kind in years. Destroying hope and the means of education, as well as the future, for Palestinian children and youth, Israeli military forces last year demolished a school in a Bedouin community in the West Bank city of Hebron.

Turning to the international community to halt Israeli demolition, Palestinians have argued that the Israeli government uses the issue of security as an excuse to force them further from the city and to expand settlement projects in the occupied territories. The Palestinian Authority described the demolitions as part of the "deal of the century," a U.S. backchannel plan for peace Palestinians decry as an attempt to liquidate their cause. Palestinian resistance group Hamas, for its part, described the Israeli demolitions as a "crime of ethnic cleansing," in a statement released in July. "The Israeli crimes against our people in Jerusalem are the result of U.S. support of the racist Israeli occupation," Hamas said.

The demolitions capped a yearslong legal battle over the buildings, built along the invisible line straddling the city and the occupied West Bank. Israel says the buildings were erected too close to its West Bank separation barrier. Residents say the buildings are on West Bank land, and the Palestinian Authority gave them construction permits.

The ongoing Israeli demolitions signal protracted wrangling over the future of Jerusalem, home to more than 500,000 Israelis and 300,000 Palestinians, and sites sacred to Judaism, Islam and Christianity. In 1980, the Israeli parliament passed a law declaring the "complete and united" city of Jerusalem to be the capital of Israel, including the eastern half that it captured in 1967. But the U.N. regards East Jerusalem as occupied, and the city's status remains disputed until it can be resolved by negotiations between Israel and the Palestinians, who say that east Jerusalem must be the capital of a future Palestinian state.