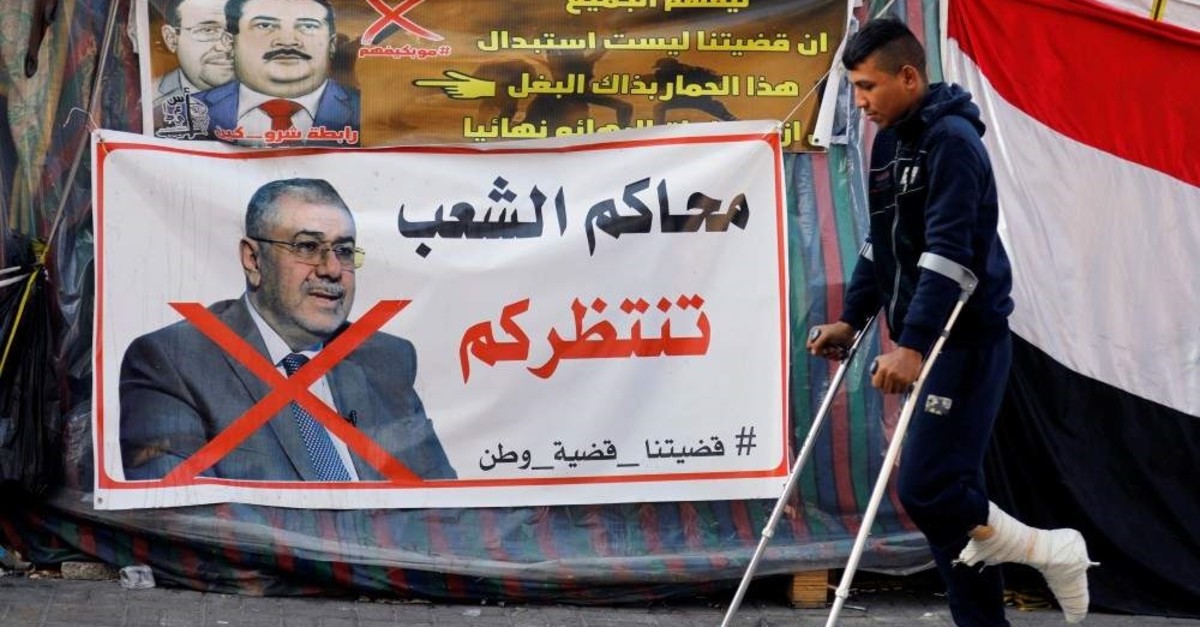 An Iraqi demonstrator on crutches walks next to a poster depicting the outgoing Higher Education Minister Qusay al-Suhail, a nominee for the prime minister office, Baghdad, Dec. 23, 2019. (REUTERS Photo)
by Compiled from Wire Services Dec 23, 2019 6:39 pm

Iraqi politicians missed another deadline to name a new prime minister because of disagreements over which is the largest bloc in parliament, deepening a crisis that has roiled the country since October amid mass protests and a state crackdown that has killed hundreds of people.

Thousands of Iraqis continued to protest and block roads on Monday in Baghdad and across the predominantly Shiite south, rejecting any candidate belonging to political groups that have ruled the country for years.

Iraq's leaderless uprising has roiled the country since Oct. 1, with at least 400 people killed in the violence. Thousands of protesters have taken to the streets to decry corruption, poor services and a lack of jobs, while also calling for an end to the political system imposed after the 2003 U.S.-led invasion.

Pressure from the demonstrations led Prime Minister Adel Abdul-Mahdi to resign late last month, after Iraq's most powerful religious authority, Grand Ayatollah Ali al-Sistani, withdrew support for Abdul-Mahdi's government. Last Friday, al-Sistani, in his weekly sermon delivered by a representative, called for political blocs to form the government quickly. The Iran-born al-Sistani said that the new prime minister should be accepted by the public.

Iraq's constitution requires that the parliament's largest bloc name a candidate for the premiership within 15 days of accepting the prime minister's resignation. That deadline expired last Thursday but was extended until midnight Sunday. No new deadline was set. Officials say neighbor Iran, a key player in Iraqi politics, wants to install Qusay al-Suhail, who served as education minister in the government of Abdul-Mahdi. But protesters categorically reject his candidacy, along with anyone from the wider political establishment that has been in place since Saddam Hussein was deposed in 2003. They are demanding the fall of President Barham Salih and Mohammed al-Halbussi the parliament speaker, accusing them of procrastinating. Abdul-Mahdi will remain in office as a caretaker premier until a replacement is named.

Iraqis have been in the streets for three months to protest the government, the U.S. and Iran. The government has long been accused of failing to protect its own people, meet their demands and create balanced relations with Iran. The protesters hold these actors responsible for the deterioration of economic, political and security problems across the country. Starting as a protest against high unemployment rates, energy shortages and corruption, the protests have since become mass street demonstrations. Although Abdul-Mahdi handed in his resignation, thousands of people continue to take to the streets every day. Moreover, certain religious groups, especially the followers of Shiite scholars, declared that they would not pledge support to any candidate proposed by the Iraqi president.