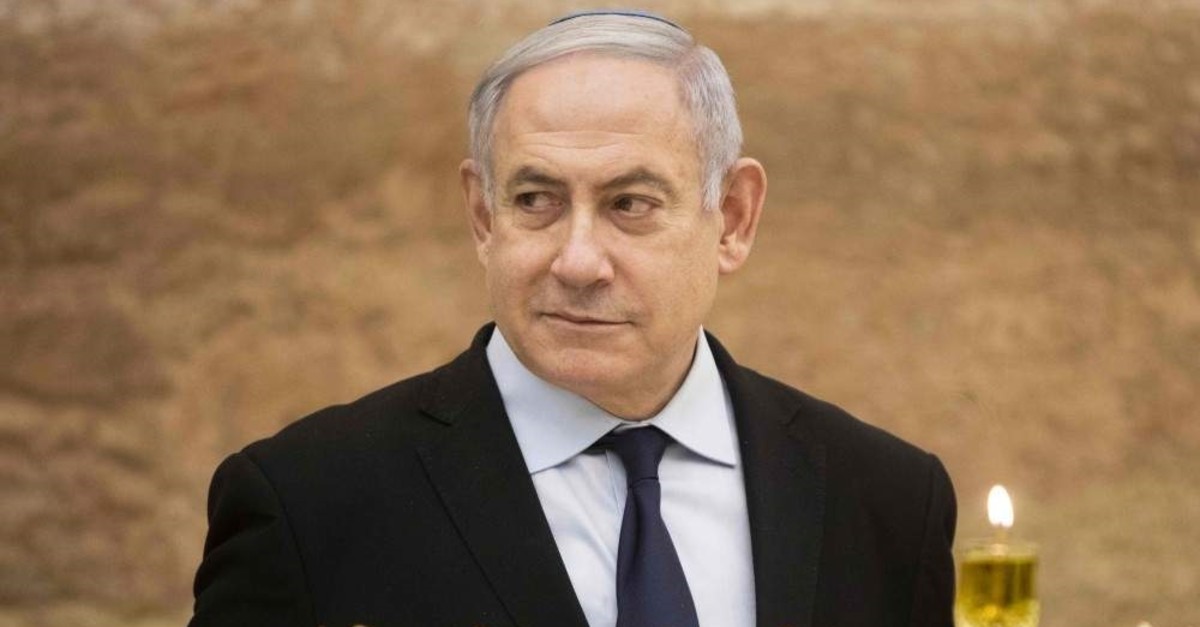 Israeli Prime Minister Benjamin Netanyahu looks on after lighting a Hanukkah candle at the Western Wall in the Old City of Jerusalem, Dec. 22, 2019. (AFP Photo)
by Daily Sabah with AA Dec 25, 2019 5:28 pm

Ahead of the leadership primary of the right-wing Likud party, Israeli Prime Minister Benjamin Netanyahu has promised that he will expand Israeli-controlled areas into the occupied Palestinian territory, including the Jordan Valley and the illegal Jewish settlements accepted by the U.S. administration.

In his message on Tuesday, Netanyahu recalled the U.S. announcement that it no longer considers Israeli settlements in the West Bank illegal and the decree signed by President Donald Trump that recognized Jerusalem as Israel's capital, saying, "I will do something more. I will make sure that he recognizes [Israeli] sovereignty in the Jordan Valley and all settlements. That's the next step, and only I can do that."

The Trump administration has delivered several landmark victories to Netanyahu, such as recognizing Israel's annexation of the Golan Heights. Netanyahu says that thanks to his close relationship with Trump, he is singularly positioned to further promote Israeli interests at this junction before the 2020 U.S. election season heats up.

In September, Netanyahu said that Israel has the "full right" to annex the Jordan Valley if it chose to, even as the chief prosecutor of the International Criminal Court warned the country against taking the bold step.

Netanyahu's statements clearly indicated that his controversial stance is directly related to his will to be elected again. Netanyahu has been clinging to power and refusing to hand the reigns over. The primary was initiated last month by lawmaker Gideon Saar, whose request marked the first formal attempt within the party to unseat Netanyahu since the attorney general announced that the premier would be indicted on charges of bribery, fraud and breach of trust.

In the elections held in April, Netanyahu failed to win a majority in parliament but did not offer an opportunity for the opposition to form a coalition. After failing to form a government, the country had to hold another election in September. Netanyahu, Israel's longest-serving prime minister, once again failed to secure a majority in the parliament. Despite failing two times in the last six months to reach a clear victory in elections, Netanyahu seemed reluctant to lose his position. Although the opposition parties offered to form a coalition, his insistence on a majority in parliament has now led the country to hold its third election in less than a year.