Iraqi supporters of Iran-backed militia attack US embassy after airstrikes 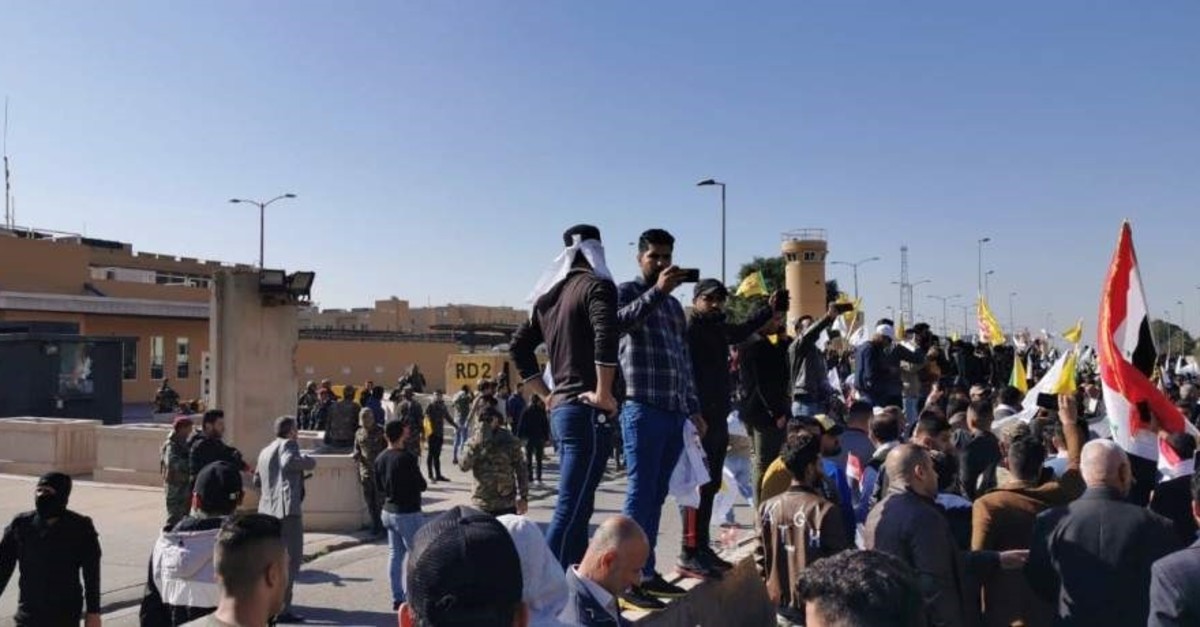 Protesters and militia fighters gather to condemn air strikes on bases belonging to Hashd al-Shaabi, outside the main gate of the U.S. Embassy in Baghdad, Iraq, Dec. 31, 2019. (Reuters Photo)
by Compiled from Wire Services Dec 31, 2019 12:18 pm

Several thousand Iraqi protesters attacked the U.S. embassy in Baghdad on Tuesday, breaching its outer wall and chanting "Death to America!" in anger over weekend airstrikes that killed pro-Iran fighters. It was the first time in years protesters have been able to reach the U.S. embassy, which is sheltered behind a series of checkpoints in the high-security Green Zone.

The embassy attack, one of the worst in recent memory, followed deadly U.S. airstrikes on Sunday that killed 25 fighters of the Iran-backed Kataeb Hezbollah militia in Iraq. The U.S. military said the airstrikes were in retaliation for last week's killing of an American contractor in a rocket attack on an Iraqi military base that it had blamed on the militia. President Donald Trump blamed Iran for a breach of the U.S. Embassy compound and called on Iraq to protect the embassy. Trump tweeted Tuesday that “Iran killed an American contractor, wounding many.” Trump said. "We strongly responded, and always will. Now Iran is orchestrating an attack on the U.S. Embassy in Iraq. They will be held fully responsible. In addition, we expect Iraq to use its forces to protect the Embassy, and so notified!"
Dozens of protesters pushed into the compound after smashing the gate used by cars to enter the embassy. The protesters, many in a militia uniform, stopped in a corridor after about 5 meters and were only about 200 meters away from the main building. Half a dozen U.S. soldiers were seen on the roof of the main building, their guns pointed at the protesters, according to the Associated Press (AP). Security guards inside the U.S. embassy in Baghdad fired stun grenades at protesters outside the gates of the compound, Reuters reported.

The protesters hanged a poster on the wall reading, “America is an aggressor,” and some commanders of militia factions loyal to Iran joined the protesters. Among those was Hadi al-Amiri, the head of the state-sanctioned paramilitary Popular Mobilization Units, the umbrella group for the Iran-backed militias. The demonstrators waved flags in support of the Hashed al-Shaabi, a mostly Shiite network of Iraqi armed groups that has received training and weapons from powerful neighbor Iran.

Iraq's caretaker Prime Minister Adel Abdel-Mahdi said Tuesday that crowds that had stormed the U.S. embassy in anger should leave the compound "immediately." "We recall that any aggression or harassment of foreign embassies will be firmly prohibited by the security forces," Abdel-Mahdi's office said several hours after the attack began. The attack came as months of political turmoil roil Iraq with thousands of protesters taking to the streets to demand an overhaul of a political system they see as corrupt and keeping most Iraqis in poverty. About 500 people have died in anti-government protests, most of them demonstrators killed by Iraqi security forces. The mass uprisings prompted the resignation last month of Abdul-Mahdi, who remains in a caretaker capacity. In a statement, Abdul-Mahdi said U.S. Defense Secretary Mark Esper had called him about a half-hour before the U.S. strikes on Sunday to tell him of U.S. intentions to hit bases of the militia suspected of being behind Friday’s rocket attack. Abdul-Mahdi said he asked Esper to call off the U.S. plan.

The U.S. has around 5,200 troops deployed across Iraq to train security forces and prevent any resurgence of the Daesh terrorist group. After the U.S. strikes, Kataeb Hezbollah and other pro-Iran factions in the Hashed demanded the "withdrawal of the American enemy." Protesters echoed those calls on Tuesday, carrying posters reading: "Parliament should oust U.S. troops, or else we will." Others carried banners with U.S. President Donald Trump's face crossed out. They scrawled "No to America!" and "Shut by order of the Resistance Brigades" on the embassy gates.