US Embassy in Baghdad suspends consular operations after Iran-backed attack 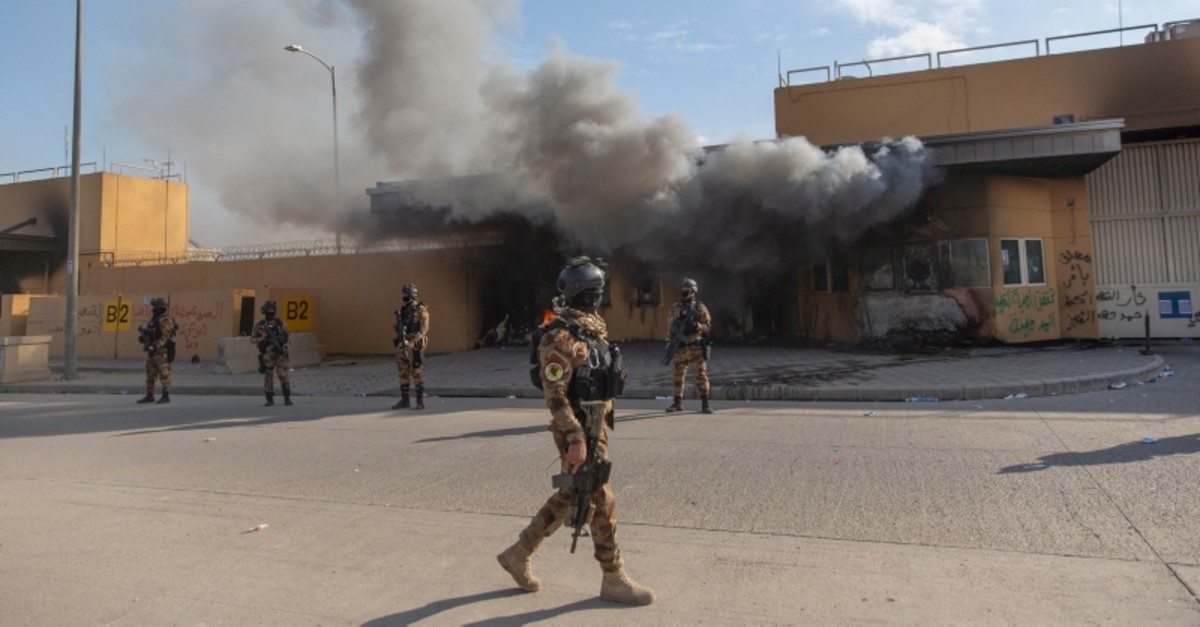 The U.S. Embassy in Baghdad said on Wednesday that all public consular operations were suspended, a day after Iran-backed militias and their supporters stormed its outer perimeter, setting fires, throwing rocks and smashing surveillance cameras.

"Due to militia attacks at the U.S. embassy compound, all public consular operations are suspended until further notice. All future appointments are canceled. U.S. citizens are advised to not approach the embassy," it said in a statement.

Several thousand Iraqi protesters attacked the U.S. Embassy in Baghdad on Tuesday, breaching its outer wall and chanting "Death to America!" in anger over weekend airstrikes that killed pro-Iran fighters. It was the first time in years protesters have been able to reach the U.S. embassy, which is sheltered behind a series of checkpoints in the high-security Green Zone.

The embassy attack, one of the worst in recent memory, followed deadly U.S. airstrikes on Sunday that killed 25 fighters of the Iran-backed Kataeb Hezbollah militia in Iraq. The U.S. military said the airstrikes were in retaliation for last week's killing of an American contractor in a rocket attack on an Iraqi military base that it had blamed on the militia. President Donald Trump blamed Iran for a breach of the U.S. embassy compound and called on Iraq to protect the embassy. Trump tweeted Tuesday that "Iran killed an American contractor, wounding many." Trump said. "We strongly responded, and always will. Now Iran is orchestrating an attack on the U.S. Embassy in Iraq. They will be held fully responsible. In addition, we expect Iraq to use its forces to protect the embassy, and so notified."

Dozens of protesters pushed into the compound after smashing the gate used by cars to enter the embassy. The protesters, many in a militia uniform, stopped in a corridor after about 5 meters and were only about 200 meters away from the main building. Half a dozen U.S. soldiers were seen on the roof of the main building, their guns pointed at the protesters, according to The Associated Press. Security guards inside the U.S. Embassy in Baghdad fired stun grenades at protesters outside the gates of the compound, Reuters reported.

The protesters hanged a poster on the wall reading, "America is an aggressor," and some commanders of militia factions loyal to Iran joined the protesters. Among those was Hadi al-Amiri, the head of the state-sanctioned paramilitary Popular Mobilization Units, the umbrella group for the Iran-backed militias. The demonstrators waved flags in support of the Hashd al-Shaabi, a mostly Shiite network of Iraqi armed groups that has received training and weapons from powerful neighbor Iran.