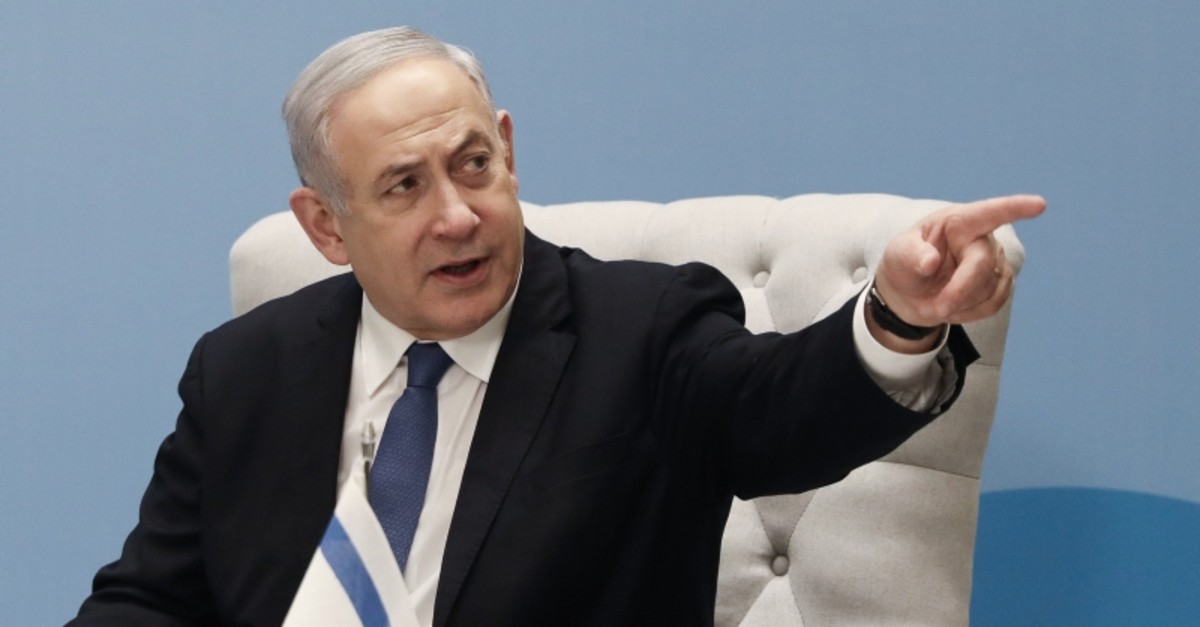 Israeli Prime Minister Benjamin Netanyahu became the first leader in his country's history to be indicted on charges of corruption during his tenure.

Netanyahu, however, unlike former Prime Minister Ehud Olmert, did not resign when faced with a formal corruption case; rather deciding to go head against the attorney general's decision and run for another term.

Ten years ago, Netanyahu, a prime minister whose tenure has been plagued by allegations of corruption, had no "public or moral mandate to make fateful decisions for the state of Israel."

The Jerusalem Post reported that Netanyahu informed associates he would not repeat the mistakes of Olmert nor allow early primaries in his Likud Party to choose a successor.

According to Palestinian political analyst Anton Shalhat, Netanyahu's decision not to step down is based on two main factors.

The first is his 10-year alliance with the media and venture capitalists in Israel.

"Netanyahu is a charismatic figure in Israeli society and he has used this feature to forge alliances with influential people that have helped him remain in his position for such a long time," Shalhat told Anadolu Agency.

Over the past 10 years, the analyst said, "Netanyahu has been able to build up an alliance in the Israeli media that will defend him against anyone and anything."

The second factor is more important and surrounds Netanyahu's success in having molded the populist narrative of Israeli society.

According to Shalhat, on the one hand, Netanyahu has strengthened the power of the Israeli right, particularly from among the settler population, securing hundreds of thousands of voters.

"Netanyahu has also opened the Israeli market up to foreign investment and the state has witnessed economic growth over the course of his rule," he said.

"Unlike Olmert, who was weak and did not have a popular base, Netanyahu has the support of half of Israeli society, including the media and capitalists," he said.

"He believes that he can maintain the prime minister's portfolio even if he defies the standards that have controlled political life in Israel since its establishment," Shalhat said.

Last November, Netanyahu was accused of bribery, fraud and breach of trust in three corruption cases.

The Israeli prime minister was charged with breach of public trust and fraud. Prosecutors claim that from 2007 to 2016, Netanyahu received $283,000's worth of gifts from Milchan and other wealthy businessmen to advance their interests.

In "Case 2000," Netanyahu allegedly asked for positive coverage from Arnon Mozes, publisher of the prominent Hebrew language daily Yedioth Ahronoth, in exchange for helping reign in the influence of a rival publication. Netanyahu was once more charged with breach of public trust and fraud.

Meanwhile, in "Case 4000", Netanyahu was charged with bribery for allegedly granting regulatory benefits to the Israeli telecom company, Bezeq, in return for favorable coverage of him and his wife on a news website owned by the company. The indictment centers on suspicions that Netanyahu confidants pushed for regulations worth hundreds of millions of dollars to the company.

Jalal Rumaneh, another expert on Israeli affairs, also believes Netanyahu has been able to maintain power in Israel through intimidation, by keeping the public surrounded by fear of internal or external threats.

For more than a decade, Netanyahu, 70, has dominated Israel's media, economy, high tech investments and social media platforms, and has been in a strong place to direct public opinion.

"The absence of another leader who could unite the right-wing parties in Israel makes it hard to replace Netanyahu at the moment from among his right-wing allies and those supporting them," Rumaneh said.

"This fact gives is what makes Netanyahu believe he can remain as prime minister of Israel for many years to come," he said.

According to Rumaneh, It is too soon to proclaim the end of the Netanyahu era. "But it may be the beginning of the end," he added.