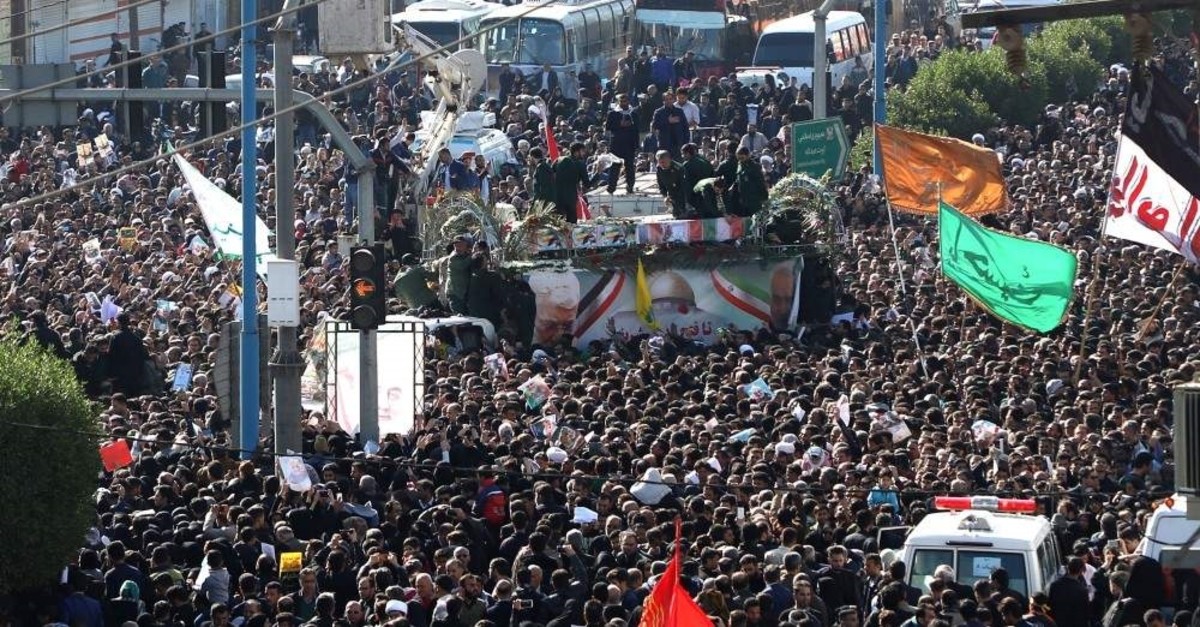 A large crowd surrounds the coffins of slain Gen. Qassem Soleimani and Iraqi paramilitary chief Abu Mahdi al-Muhandis, as they are transported atop a vehicle after their arrival at Ahvaz International Airport in southwestern Iran, Jan. 5, 2020. (Photo by Fars News / AFP)
by Daily Sabah with Agencies Jan 05, 2020 6:30 pm

U.S. President Donald Trump's hostile announcements on Saturday did not help ease the tensions between his country and Iran as thousands of Iranians mourned the killing of Qassem Soleimani. The entire world remains fearful of the assassination's possible consequences

Hundreds of thousands of Iranians gathered yesterday for a funeral procession in the town of Ahvaz to commemorate Qassem Soleimani, a top Iranian general whose death in a U.S. drone strike has stoked fears of a new war in the Middle East.

A sea of mourners dressed in black gathered in the southwestern city, some holding portraits of the popular commander of Iran's elite Quds Force, who died last Friday in a targeted U.S. killing in Baghdad.

They chanted anti-American slogans as they packed the streets and filled a long bridge spanning a river in the southwestern city, where Soleimani's remains arrived from Iraq before dawn.

U.S. President Donald Trump warned Saturday night that the U.S. would hit Iran harder than ever before if it retaliates over the assassination of Soleimani, the commander of the Iranian Revolutionary Guards' Quds Force foreign operations arm.

U.S. Secretary of State Mike Pompeo also defended the U.S.' actions, saying intelligence made clear taking no action against the military leader would have posed a greater risk.

The announcements did not help de-escalate the already high tensions between the two countries.

A very alarming announcement came yesterday from Hezbollah leader Sayyed Hassan Nasrallah, as he marked the killing of Iranian Major General Qassem Soleimani as a new phase in the history of the Middle East.

Referring to the date of Soleimani's killing in a U.S. air strike in Baghdad, Nasrallah said it was a "date separating two phases in the region ... it is the start of a new phase and new history not just for Iran or Iraq but the whole region". He added that it was the beginning of a new war of a new type in the region.

According to Mousavi, the threat was an attempt to distract the world from Soleimani's "unjustifiable" assassination.

Soleimani was killed in a U.S. drone strike Friday near Baghdad's international airport upon orders by Trump, who accused the general of planning an imminent attack on American diplomats and troops in Iraq.

Yesterday, Iraq's parliament held an extraordinary session with Prime Minister Adel Abdul Mahdi in attendance. They gathered to push for a vote on a resolution requiring the government to tell Washington to withdraw U.S. troops from the country.

Some signs of retaliation started to show in neighboring Iraq, as pro-Iran factions ramped up pressure on U.S. installations with missiles and warnings to Iraq's troops.

Two mortar rounds struck Saturday near the U.S. Embassy in Baghdad, according to security sources.

Iraq's military confirmed both missile attacks and claimed there were no casualties. The U.S. military also said no coalition troops were hurt.

The United States-led international coalition against Islamic State said yesterday that it had paused its training and support of Iraqi security forces due to repeated rocket attacks on bases housing its troops.

Nations around the world are worried about the possibility of serious consequences.

The European Union announced Sunday that they had invited Iran's foreign minister to Brussels, urging a "de-escalation of tensions" in the Gulf.

The EU's foreign policy chief, Josep Borrell, made the offer to Mohammad Javad Zarif during a telephone call last weekend, according to a press release.

The killing was not a starting point of the tensions that were already present between the two countries.

They have escalated since 2018 when Trump unilaterally withdrew the United States from the landmark accord that gave Tehran relief from sanctions in return for curbs on its nuclear program.

Iran has hit back by reducing its nuclear commitments with a series of steps every 60 days, the most recent deadline passing Saturday.