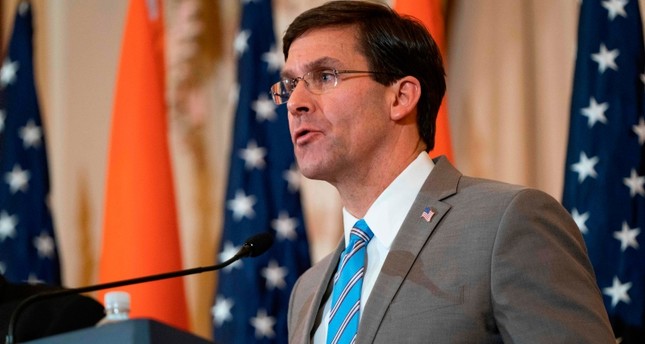 The U.S. has made no decision about withdrawing troops from Iraq, Defense Secretary Mark Esper said Monday in response to a letter from a senior military officer that appeared to suggest a withdrawal was underway.

Esper told reporters Monday that the U.S. is not pulling troops out of Iraq.

He said he didn't know anything about a letter that appears to suggest some preparation of troops to move out of Iraq. But he said there has been some repositioning of U.S. forces.

"There's been no decision whatsoever to leave Iraq," he said, adding, "There's no decision to leave, nor did we issue any plans to leave or prepare to leave." He said the U.S. remains committed to the campaign to defeat the Daesh group in Iraq and the region.

A letter sent Monday to the Iraqi government from a commander in Iraq said troops would be "repositioning over the course of the coming days and weeks to prepare for onward movement."

The letter said there would be an increase in helicopter travel around the Green Zone and said, "We respect your sovereignty decision to order our departure."

Pro-Iran factions in the Iraqi Parliament have pushed to oust American troops following the killing of a top Iranian general in Baghdad in a U.S. drone strike last week.

"This is not a movement of U.S. forces out of the country," the official said, speaking on condition of anonymity.

The official, who was not authorized to discuss the letter publicly, said the letter did not accurately portray the reason for the temporary redeployment of troops and contractors from Baghdad's Green Zone.

Share on Facebook Share on Twitter
Previous in MidEast Hundreds of thousands are mourning the death of Qassem Soleimani in... Next in MidEast Iran's parliament passed a bill Tuesday designating all U.S. forces...
DAILY SABAH RECOMMENDS