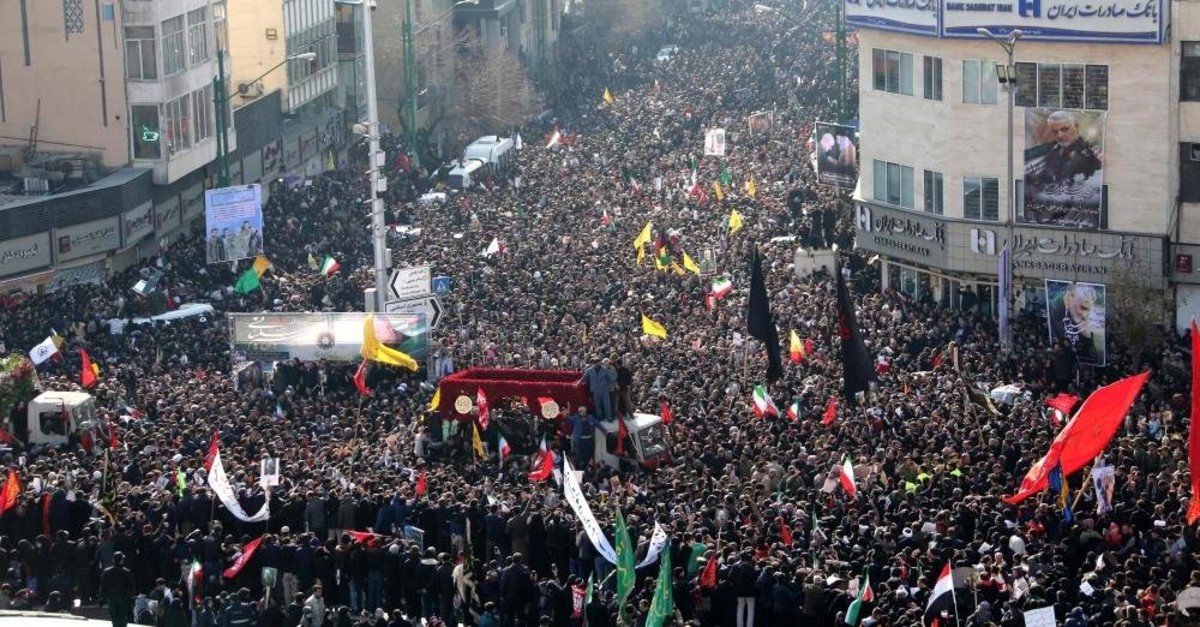 Downtown Tehran was brought to a standstill Monday as mourners flooded the Iranian capital to pay homage to Qassem Soleimani, the country's top general who was killed in a U.S. strike.

Young and old were packed shoulder-to-shoulder in the streets, including women dressed in black-clad chadors and others wearing loose-fitting headscarves.

State television said it was a "several million-strong" turnout. Tuesday will mark the last day that Iranians will unite to mourn Soleimani.

The procession is also symbolically loaded and serves as a reminder about Iran's capacity of unifying, as well as showcasing Iran's size and caliber to the world.

Supreme Leader Ayatollah Ali Khamenei, who has vowed "severe revenge" for the U.S. attack, presided over prayers for the slain general.

He appeared to cry beside the flag-draped coffins containing the remains of Soleimani and five other "martyrs" killed in the strike.

The streets of Tehran were so full of people that many were unable to emerge from underground metro stations, semi-official news agency ISNA reported.

Chants of "death to infidels," "death to seditionists" and "death to al-Saud," a reference to the Saudi ruling family, were then heard.

As the anti-American sentiment within the Iranian community continues to intensify, world leaders are growing increasingly concerned about possible repercussions from the killing.

The developments could bring Iran closer to building an atomic bomb, set off a proxy or military attack launched by Tehran against the U.S. and enable the Daesh terrorist group to stage a comeback in Iraq, making the Middle East a far more dangerous and unstable place.

Some nations expressed their willingness to evacuate their citizens from the region.

Philippine President Rodrigo Duterte ordered the military to prepare to deploy its aircraft and ships "at any moment's notice" to evacuate thousands of Filipino workers in Iraq and Iran should violence break out, reflecting Asia's growing fears for its citizens.

Soleimani's killing marked a dramatic escalation in tensions between the U.S. and Iran, which have often been at a fever pitch since President Donald Trump chose in 2018 to unilaterally withdraw Washington from a nuclear pact world powers struck with Tehran.

Iran's top security body has vowed "harsh retaliation" at the "right time and right place" to the general's killing.

The processions for Soleimani mark the first time Iran honored a single man with a multi-city ceremony. Not even Ayatollah Ruhollah Khomeini, who founded the republic, received such a processional with his death in 1989.

Soleimani will be buried in his hometown of Kerman.