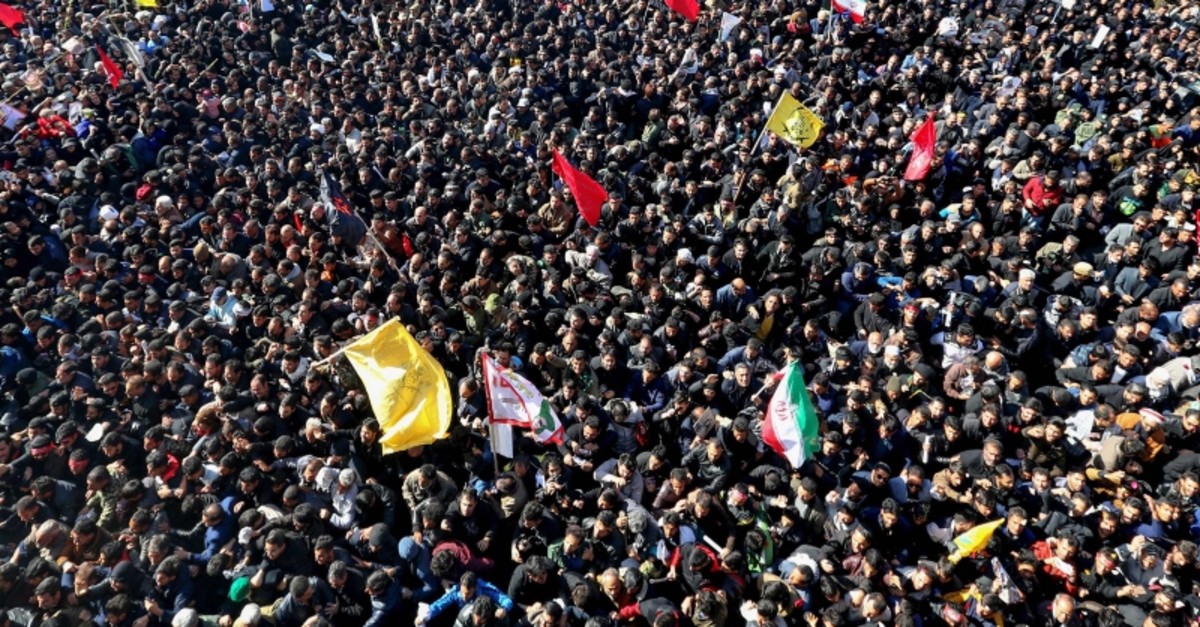 Iranian Gen. Qasem Soleimani was buried Wednesday in his hometown Kerman, shortly after the Iranian attack on U.S.-Iraqi military bases in retaliation for the killing of the general.
Previously, two semiofficial Iranian news agencies announced that 40 people were killed and 213 others injured in a stampede which broke out during a funeral procession for Revolutionary Guard general Qassem Soleimani in the latter's hometown of Kerman.

The semiofficial Fars and ISNA news agencies announced the latest death toll resulting from the stampede in Iran’s southeastern city as of Tuesday. There was no information as to what had set off the stampede.

Initial videos posted online showed people lying lifeless on a road and others shouting and trying to help them. The general's funeral was later delayed, but for how long it was not announced.

A procession in Tehran on Monday drew over 1 million people onto the streets of the Iranian capital, crowding main thoroughfares and side streets. Monday was relatively peaceful, however, the outrage felt by Iranians over the general's death is still palpable, with anti-American slogans being shouted across the country.

Tuesday was intended to mark the last public gathering in honor of Solemani, coinciding with a funeral to take place in his hometown of Kerman. a desert city that dates back to the days of the Silk Road. However, the stampede which broke out serves much to demonstrate the country's current state of collective trauma.

Solemani’s burial was postponed to later in the day. He is expected to be buried between the graves of Enayatollah Talebizadeh and Mohammad Hossein Yousef Elahi, two former comrades. The two died in Operation Dawn 8 in the Iran-Iraq War in which Soleimani also took part. The war 1986 amphibious assault that cut Iraq off from the Persian Gulf and led to the end of the bloody war that killed 1 million people.

A period of three days of mourning was announced to serve as an opportunity for Iran to unite across sectarian lines to express their growing frustration in the face of controversial statements coming from all sides concerning the assassination.

The U.S. government has warned ships of an unspecified threat from Iran across all Middle Eastern waterways, which are vital for global energy supplies. Meanwhile, the U.S. Air Force launched a drill with 52 fighter jets in Utah just days after President Donald Trump threatened to hit 52 sites in Iran.

In the early hours of Tuesday, the leader of Iran’s Revolutionary Guard threatened to “set ablaze” places supported by the United States over the killing of a top Iranian general in a U.S. airstrike last week, sparking cries from the crowd of “Death to Israel!” Hossein Salami made the pledge before a crowd of thousands gathered in a central square in Kerman before a casket arrived carrying Soleimani's remains.

His vow mirrored the demands of top Iranian officials – from Supreme Leader Ayatollah Ali Khamenei to others – as well as supporters across the republic, demanding retaliation against the U.S. for a slaying that has drastically raised tensions across the Middle East.

Iranian Supreme Leader Ayatollah Ali Khamenei Tuesday ordered the IRGC budget to be increased by the equivalent of $225 million until March 20, said Parliamentary Speaker Ali Larijani, according to the state-run news agency IRNA.

The increase is related to the implementation of the "hard revenge" plan against the United States for the killing of Soleimani, he said.

In addition, the Iranian parliament has designated all Pentagon commanders who were responsible for Soleimani's death as "terrorists," IRNA reported.

The law was passed unanimously with calls of "death to the United States" from lawmakers.

The whole world is watching with bated breath as the two countries continue to engage in an increasingly bitter war of words. Soleimani’s assassination has already pushed Iran to abandon the remaining terms of its 2015 nuclear deal with various world powers.

According to a report Tuesday by the semi-official Tasnim news agency, Iran has created 13 sets of plans for the revenge of Soleimani's killing. The report quoted Ali Shamkhani, the secretary of Iran’s Supreme National Security Council, as saying that even the weakest among them would be a “historic nightmare” for the U.S. He declined to give any details.

“If the U.S. troops do not leave our region voluntarily and upright, we will do something to carry their bodies horizontally out," Shamkhani said.

Additionally, the Iraqi parliament has called for the expulsion of all American troops from its soil, something analysts fear could allow Daesh terrorists to make a comeback.

Also Tuesday, Iranian Foreign Minister Mohammad Javad Zarif said the U.S. had declined to issue him a visa to travel to New York for upcoming meetings at the United Nations. The U.S. as the host of the U.N. headquarters is supposed to allow foreign officials to attend such meetings.