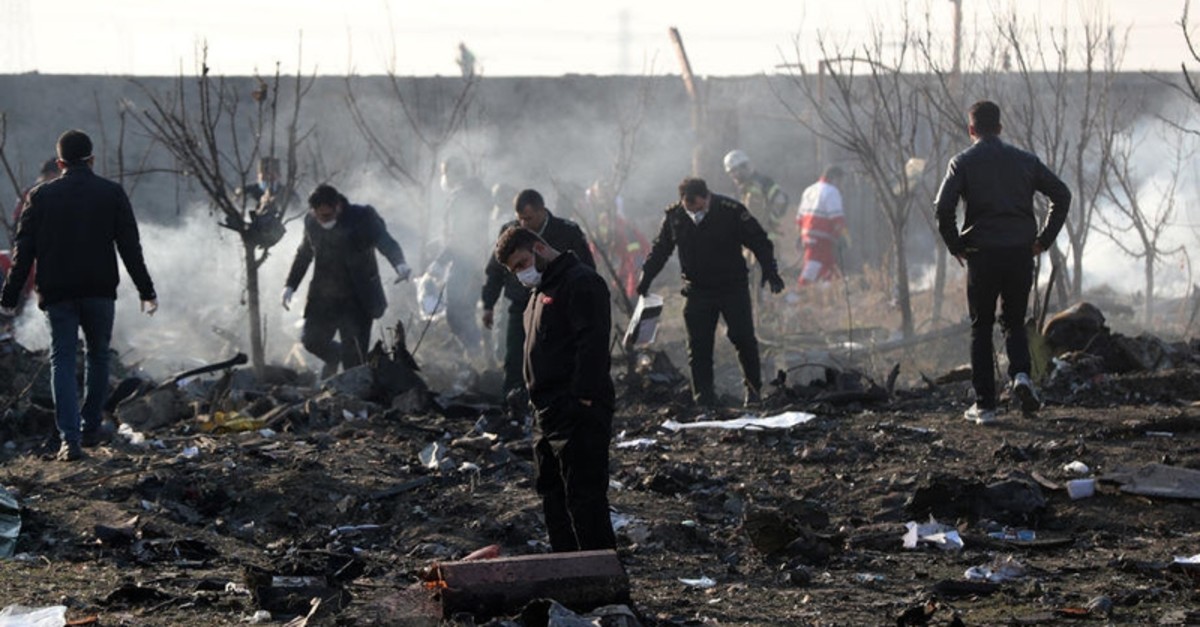 Officials inspect the wreckage after an Ukraine International Airlines Boeing 737-800 carrying 176 people crashed near Imam Khomeini Airport in Tehran, killing everyone on board, in Shahriar, Iran, 08 January 2020. (EPA-EFE Photo)
by Compiled from Wire Services Jan 09, 2020 2:56 pm

A top Ukrainian security official Thursday set out what he said were the four main theories for why a Ukrainian airliner crashed in Iran the previous day killing 176 people, including a possible missile strike and terrorism.

Oleksiy Danylov, secretary of Ukraine's National Security and Defense Council, made his statement as an initial report by Iranian investigators said the plane, a Boeing 737-800, had been on fire immediately before it crashed.

Ukraine is looking at various possible causes of the crash, including a possible missile attack, a collision, an engine explosion or terrorism, he wrote in a Facebook post.

Later on Thursday, Ukrainian President Volodymyr Zelenskiy, in a phone call with Iranian counterpart Hassan Rouhani, discussed the investigation into the plane crash, Zelenskiy's office said in a statement.

"Hassan Rouhani stressed that Iran would provide the Ukrainian expert group with prompt access to all the necessary data," the statement noted.

Under international aviation rules, Iran is responsible for running the inquiry into the crash.

The crash happened hours after Iran launched missile attacks on U.S.-led forces in Iraq, leading some to speculate that the plane may have been hit.

But an initial assessment by Western intelligence agencies was that the plane had suffered a technical malfunction and had not been brought down by a missile, five security sources – three Americans, one European and one Canadian – who asked not to be named, told Reuters.

Danylov said Ukrainian investigators in Iran wanted to search the crash site for possible debris of a Russian missile after seeing reports about its possible existence on the internet.

He referred to an unverified image being circulated on Iranian social media purportedly showing the debris of a Russian-made Tor-M1 surface-to-air missile of the kind used by the Iranian military.

"Our (investigative) commission is talking to the Iranian authorities about visiting the crash site and is determined to search for fragments of a Russian Tor air defense missile about which there was information on the internet," Danylov separately told Ukrainian news site Censor.net.

He said Ukraine would draw on the expertise learned from carrying out its own investigation into the 2014 shooting down of Malaysia Airlines flight MH-17 over eastern Ukraine, an incident that killed all 298 people on board.

The crash killed all 176 passengers on board shortly after it took off from Tehran's international airport. It came at the time when the Iranian army had launched tens of ballistic missiles targeting U.S. troops in Iraq.