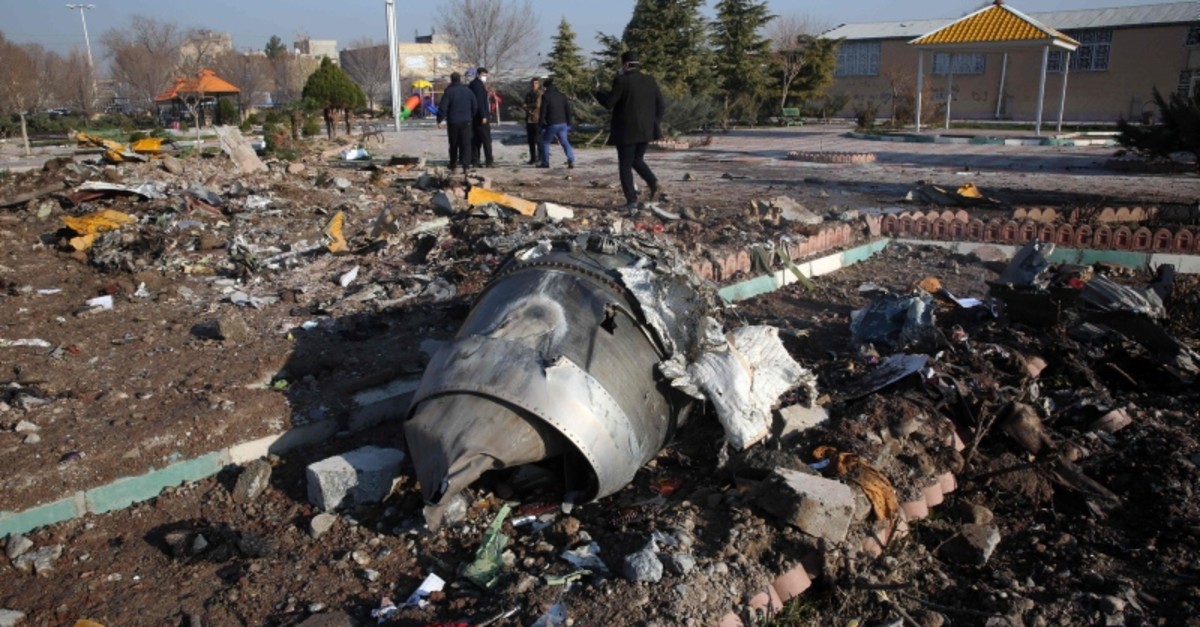 Rescue teams work amidst debris after a Ukrainian plane carrying 176 passengers crashed near Imam Khomeini airport in the Iranian capital Tehran early in the morning on January 8, 2020, killing everyone on board. (AFP Photo)
by Daily Sabah with Wires Jan 09, 2020 8:17 pm

The officials added that the plane crash, which left 176 people dead, was "most likely" brought down accidentally by Iranian air defenses.

U.S. President Donald Trump said earlier Thursday that the deadly crash of the Ukrainian plane could have been a mistake, adding that he had a terrible feeling about the downed airliner but offering no evidence.

"Somebody could have made a mistake," Trump told reporters at the White House, adding that he had suspicions about the crash but giving no other details.

Pentagon also released a statement, saying that "they cannot comment" on the crash.

Canadian Prime Minister Justin Trudeau said Thursday evidence indicates the plane was downed by an Iranian missile and that the strike "may have been unintentional."

Trudeau said Canadian and allied intelligence supports that. He declined to get into the specific intelligence, but said it appeared it was a surface-to-air missile that struck the plane.

"The intelligence evidence suggests very clearly a possible and probable cause for the crash," Trudeau told a news conference. At least 62 Canadians were among the 176 dead.

Meanwhile, video footage shared on social media showed the moment the plane was apparently hit by a missile, minutes after takeoff, as confirmed by The New York Times' visual investigation team.

The NYT said the video showed that a small explosion took place when the plane was hit but the plane itself did not explode and continued flying for several minutes. The airliner later exploded and crashed while returning to the Tehran airport, the NYT said, citing other verified videos.

Later on Thursday, Iranian government official said the country has begun investigations into the cause of the crash in accordance with international standards and has invited Ukraine as the owner of the aircraft along with Boeing as the aircraft manufacturer to participate in the investigation.

"We are calling on the Canadian Prime Minister and any other government that has information about the crash to hand it over to the investigation committee in Iran," Iranian Foreign Ministry Spokesman Abbas Mousavi was quoted as saying by state news agency IRNA.

The Ukraine International Airlines (UIA) Boeing 737NG went down Wednesday, shortly after Tehran launched missiles at U.S. forces in Iraq in response to the killing of a top Iranian general in a U.S. drone strike in Baghdad.

Oleksiy Danilov, the secretary of Ukraine's National Security and Defense Council, told AFP that investigators were looking at a number of leads.

These include a collision with another airborne object, a rocket from Iran's missile defense system, an engine explosion caused by a technical problem, and an explosion on board the aircraft due to an "act of terror," he said on Facebook.

Danilov told AFP that for the moment there was no reason to believe that the airliner had been hit by a missile.