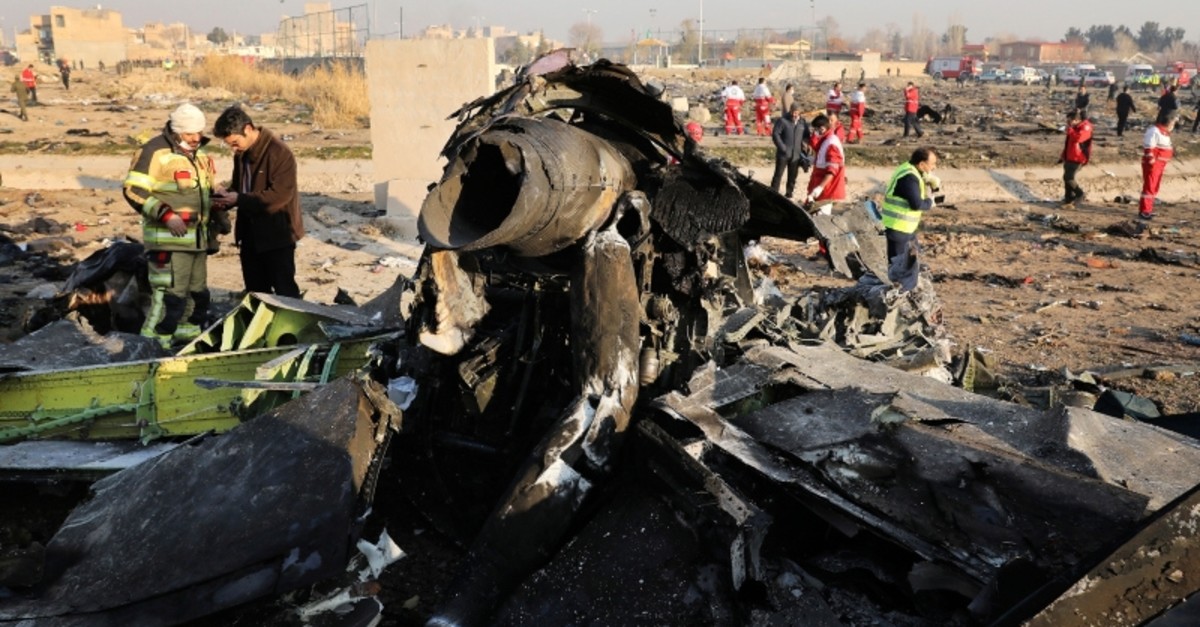 Iran said its military "unintentionally" shot down the Ukrainian commercial jet near Tehran that crashed and killed everyone aboard, in a statement cited by Iranian state television on Saturday.

Tehran cited "human error" as laying behind the incident and said Iran's armed forces regretted that it had led to the deaths of those on board the plane. The admission came after several days of Iran vehemently denying responsibility for the plane crash and blaming it on a technical fault.
Iran's President Hassan Ruhani apologized on behalf of his country over the downed plane, Ukraine's president's office says after a call with Ruhani Saturday. In the call, Ukraine's president Volodymyr Zelensky told his counterpart that all perpetrators must be held accountable and insists on the immediate completion of the identification of the bodies and their return to Ukraine. Expecting the bodies of the Ukrainian victims to be returned next week the president's office said that the crew of the downed plane acted in strict accordance with international flight rules and instructions.

All 176 people on board the Ukrainian International Airlines (UIA) Boeing 737 airliner died when it crashed in a field shortly after take-off on Wednesday morning.

Ruhani confirmed that "human error led to this terrible catastrophe."

"Those responsible for this unforgivable mistake will be prosecuted," Ruhani said in a statement Saturday adding that he expressed his "deepest sorrow on behalf of the Islamic Republic of Iran."

Meanwhile, Zelensky said "Iran has pleaded guilty to crashing the Ukrainian plane. But we insist on a full admission of guilt."

"We expect from Iran assurances of their readiness for a full and open investigation, bringing those responsible to justice, the return of the bodies of the dead, the payment of compensation, official apologies through diplomatic channels," he added.
Later Saturday, an Iranian Revolutionary Guard commander said his unit accepts “full responsibility” for the accidental shootdown of a Ukrainian passenger plane.

In an address broadcast by state TV on Saturday, Gen. Amir Ali Hajizadeh says that when he learned about the downing of the plane, “I wished I were dead.”

"I take full responsibility and I will obey whatever decision is taken," Brigadier General Amirali Hajizadeh said in remarks broadcast on state television.
He said Guard forces ringing the capital had beefed up their air defenses and were at the “highest level of readiness,” fearing that the U.S. would retaliate. He said an officer made the “bad decision” to open fire on the plane after mistaking it for a cruise missile. According to Hajizadeh, the missile operator opened fire independently because of communications "jamming."
"It was a short-range missile that exploded next to the plane. That's why the plane was able" to continue flying for a while, Hajizadeh said. "It exploded when it hit the ground."

The incident occurred hours after Iran fired missiles at bases hosting U.S. troops in neighboring Iraq in retaliation for the killing of a top Iranian general in a U.S. airstrike.

Most of the victims were Iranian and Canadian citizens. There were also Ukrainian, Swedish and British nationals among those on the plane.

The European Aviation Safety Agency (EASA) and the US Federal Aviation Administration (FAA) are among aviation authorities that have since advised airlines to avoid flights through Iraqi and Iranian airspace.

Tensions have been rising between the United States and Iran since President Donald Trump ordered the killing of top Iranian Gen. Qassem Soleimani last week.

Tensions appear to have eased in the wake of Iran's strikes in Iraq, with Washington imposing new economic sanctions in place of a counter-strike.