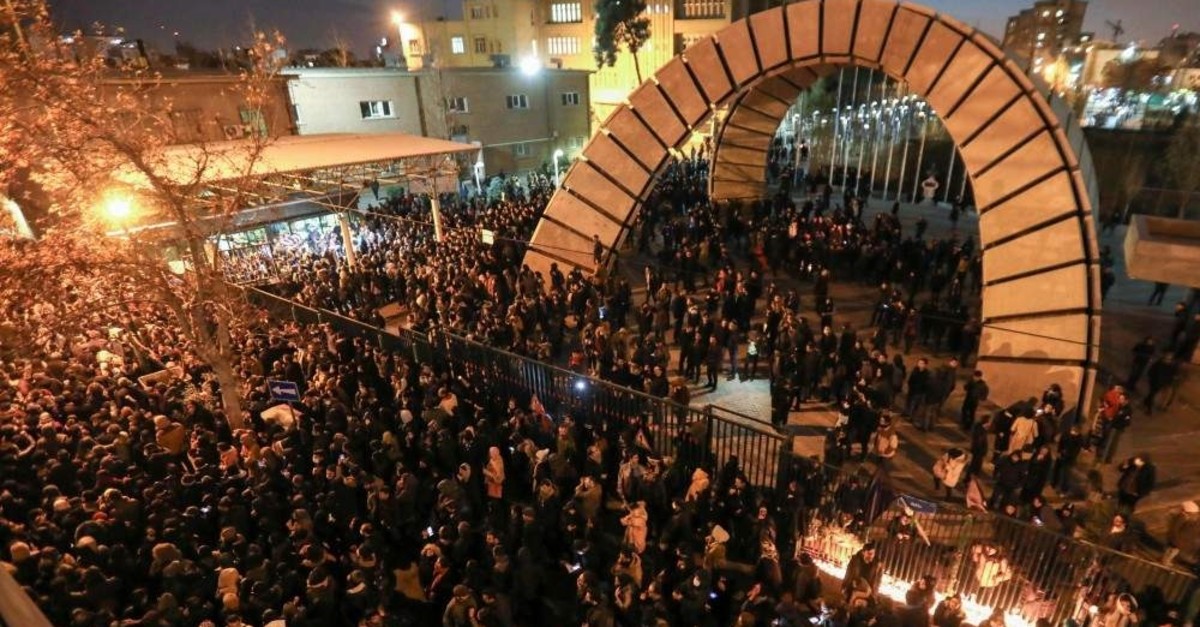 In the face of mounting evidence, Iran acknowledged on Saturday that it shot down the Ukrainian jetliner by accident, killing all 176 people aboard. The admission by Iran's Revolutionary Guard undermined the credibility of information provided by senior officials, who for three days had adamantly dismissed allegations of a missile strike as Western propaganda.

Protests were reported late Saturday in several parts of the Iranian capital Tehran over the shooting down of the Ukrainian passenger plane by the Iranian military, according to Iranian media.

Hundreds of people took part in Saturday night protest rallies outside Tehran, Amir Kabir and Sharif, according to news agencies IRNA and Isna. They criticized both the shooting down and the day-long denials by Iranian authorities and the media. Yesterday, the country deployed riot police in the capital with the expectation of more protests to erupt.

The confession raised a host of new questions, such as why Iran did not shut down its international airport or airspace Wednesday when it was bracing for the U.S. to retaliate for a ballistic missile attack on two military bases housing U.S. troops in Iraq. No one was hurt in that attack, carried out in retaliation for the killing of Iranian Gen. Qassem Soleimani in an American airstrike in Baghdad.

Iran's acknowledgment alters the narrative around its confrontation with the U.S. in a way that could anger the Iranian public. Iran had promised harsh revenge after Soleimani's death, but instead of killing American soldiers, its forces downed a civilian plane in which most passengers were Iranian.

President Donald Trump tweeted messages of support to Iranians who back protests of the government, saying he and his administration are behind them. In the tweets, Trump called on the Iranian government to allow human rights groups to monitor the protests and expressed support for the "brave, long-suffering people" of Iran.

Gen. Amir Ali Hajizadeh, the head of the Guard's aerospace division, claimed that his unit accepts full responsibility for the shootdown. In an address broadcast by state TV, he said when he learned about the downing of the plane, "I wished I was dead."

He expressed that the airline's pilot and crew had done nothing wrong, but an officer made the "bad decision" to open fire on the plane after mistaking it for a cruise missile.

"We were prepared for an all-out conflict," he claimed.

Ukraine's President Volodymyr Zelenskiy thanked the U.S, Britain, Canada and others for information about the crash and their support. He said that "undoubtedly helped" push Iran to acknowledge its responsibility for the crash. Zelenskiy insisted the crash investigation should continue and the "perpetrators" should be brought to justice.

The plane, en route to the Ukrainian capital of Kyiv, was carrying 167 passengers and nine crew members from several countries, including 82 Iranians, 57 Canadians – including many Iranians with dual citizenship – and 11 Ukrainians, according to officials.

The shootdown of the plane and the lack of transparency around it, along with the restrained response to the killing of Soleimani, could reignite anger at the country's leadership.

President Hassan Rouhani acknowledged Iran's responsibility but blamed the downing of the plane in part on "threats and bullying" by the U.S. after the killing of Soleimani. He expressed condolences, calling for a full investigation and the prosecution of those responsible.