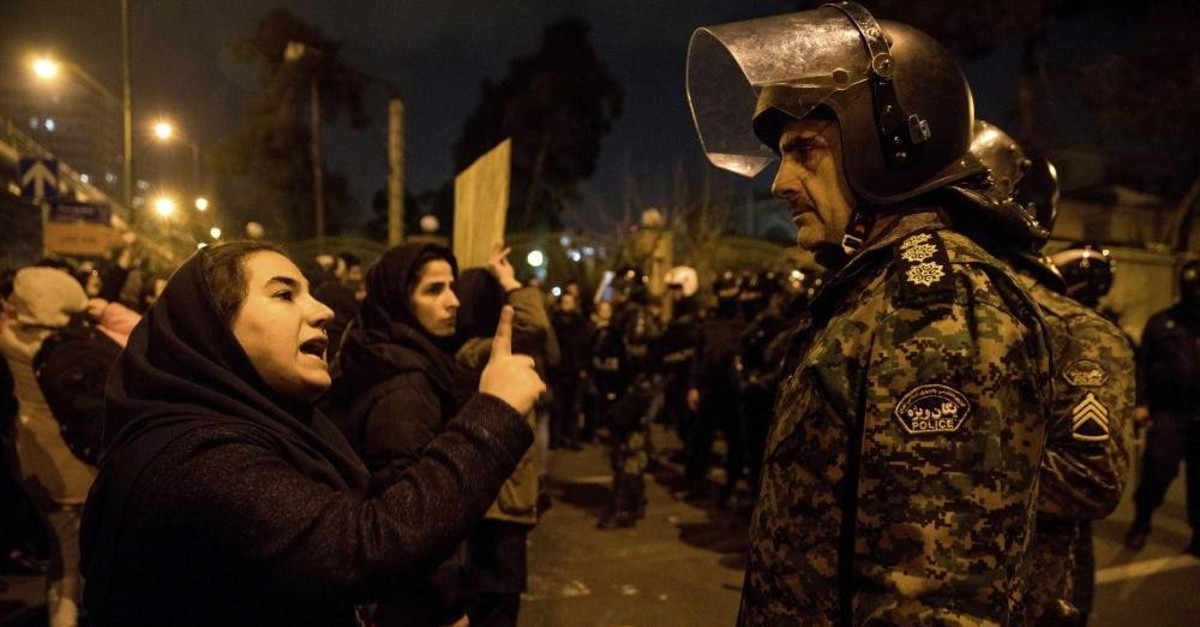 Following public anger over the downing of a passenger jet, Iranian authorities denied excessive use of police force while dismissing U.S. President Trump's messages of support for protesters

Iranian security forces have denied targeting demonstrators with live ammunition and tear gas amid unabating protests against Tehran's initial denial that it shot down a Ukrainian jetliner.

After videos and images emerged from the previous two days of protests, police in Tehran have been ordered to show "restraint" at demonstrations that erupted after the accidental downing of a Ukrainian passenger jet, the Iranian capital's police chief said Monday. "The police treated the people who had gathered with patience and tolerance" during the second night of demonstrations in Tehran on Sunday, Gen. Hossein Rahimi said. "The police did not shoot at the gatherings at all because a restraint order (had been issued) for police in the capital," he said in a statement published by state television.

Videos sent to the New York-based Center for Human Rights in Iran and later verified by The Associated Press (AP) show a crowd of demonstrators near Azadi, or Freedom, Square fleeing as a tear gas canister landed among them. People cough and sputter while trying to escape the fumes, with one woman calling out in Farsi: "They fired tear gas at people! Azadi Square. Death to the dictator!" Another video shows a woman being carried away in the aftermath as a blood trail can be seen on the ground. Those around her cry out that she has been shot by live ammunition in the leg.

Security was stepped up in Iran's capital Sunday after a vigil for those killed in the air disaster turned into an angry protest and police temporarily arrested the British ambassador for being there. The Ukraine International Airlines plane bound for Kyiv was shot down shortly after takeoff from Tehran on Wednesday, killing all 176 people on board. Officials in Iran initially denied Western claims the Boeing 737 was downed by a missile, before acknowledging on Saturday that it had been shot down in a catastrophic error. After days of denying responsibility, commanders of Iran's Revolutionary Guards issued profuse apologies. Iran's president called it a "disastrous mistake." A top commander said he had told the authorities on the day of the crash it had been shot down, raising questions about why Iran had initially denied it.

U.S. President Donald Trump, who raised the stakes earlier this month by ordering the killing of Iran's most powerful military commander, tweeted to Iran's leaders: "don't kill your protesters." Iran's government spokesman dismissed Trump's comments, saying Iranians were suffering because of his actions and they would remember that he had ordered the killing of Gen. Qassem Soleimani, Iran's top general, whose death on Jan. 3 prompted days of mourning ceremonies.

Iran downed the flight as it braced for possible American retaliation after firing ballistic missiles at two bases in Iraq housing U.S. forces earlier on Wednesday. The missile attack, which caused no casualties, was a response to the killing of Soleimani in a U.S. airstrike in Baghdad. But no retaliation came.

Tehran's showdown with Washington has come at a precarious time for the authorities in Iran and the proxy forces they support to wield influence across the Middle East. Sanctions imposed by Trump have caused deep harm to the Iranian economy. Iranian authorities killed hundreds of protesters in November in what appears to have been the bloodiest crackdown on anti-government unrest since the 1979 revolution. In Iraq and Lebanon, governments that have the support of Iran-backed armed groups have also faced months of hostile mass demonstrations.