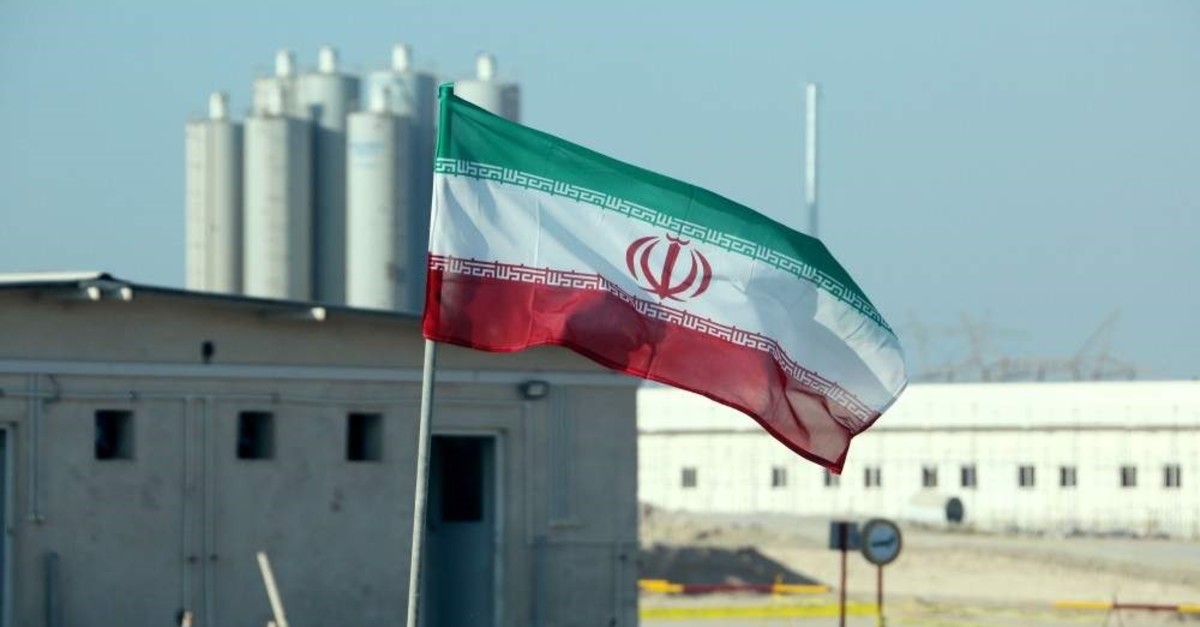 An Iranian flag flutters in Iran's Bushehr nuclear power plant, during an official ceremony to kick-start works on a second reactor at the facility, Nov. 10, 2019. (AFP Photo)
by Daily Sabah with Agencies Jan 14, 2020 7:52 pm

In the wake of Iran accusing the British ambassador in Tehran of violating the country's laws and calling for his expulsion, European countries have triggered the Tehran nuclear deal's dispute mechanism, in a move set to escalate tensions further

Amid escalating diplomatic tension, Iran has threatened to expel the U.K. ambassador to Tehran, accusing him of attending illegal anti-regime protests. The move came as European countries formally triggered the dispute mechanism under the nuclear deal, formally known as the Joint Comprehensive Plan of Action (JCPOA), which it signed with world powers Tuesday, the strongest move taken so far to enforce an agreement that requires Iran to curb its nuclear program.

Iran's judiciary said Tuesday that Britain's ambassador to Tehran was an "undesirable element," state media reported, after Iranian officials accused him of attending an illegal protest, a charge he denies. Rob Macaire, who has been in the post since 2018, was briefly detained on Saturday, as Iranian officials said he had attended an illegal demonstration that took place amid public fury in response to Iran's belated admission that its military shot down a Ukrainian passenger plane. The ambassador said he had attended a vigil for victims of the crash. London said his detention was a violation of diplomat conventions.

Iran's Foreign Ministry, which summoned the ambassador, would be the authority responsible for making any announcements to expel Macaire. "Based on international regulations, the British ambassador in Iran is an undesirable element," judiciary spokesman Gholamhossein Esmaili told reporters when asked about the fate of the British envoy, in remarks carried on state television. A prominent hardline Iranian cleric also said expelling the ambassador would be "the best thing that can happen to him." Ayatollah Ahmad Alamolhoda indicated that otherwise, loyal supporters of the general killed in a U.S. drone strike would "chop him to small pieces," in remarks carried on the Eslahat news site.

Relations between Tehran and London have been historically poor, with Iran equating Britain with the U.S. in representing "imperialism" and "arrogance."

The statement by the Iranian judiciary came as the British Prime Minister Boris Johnson reiterated his willingness to work on a "Trump deal" to replace an international accord designed to stop Iran from developing nuclear weapons. "If we are going to get rid of it then we need a replacement," Johnson said of the 2015 nuclear deal that Britain and other European powers have been trying to salvage since the U.S. President Donald Trump pulled the United States out in 2018.

European powers said they had taken the step in order to avoid a crisis over nuclear proliferation being added to the mix of escalating confrontations in the Middle East. In a statement, they said they still wished the deal to succeed and would not join in on the "maximum pressure" campaign launched against Iran by the U.S., who abandoned the deal in 2018 and has since reimposed sanctions. Triggering the dispute mechanism amounts to formally accusing Iran of violating the terms of the agreement and could lead to the eventual reimposition of U.N. sanctions that the deal previously saw lifted. Iran's foreign ministry spokesperson said that "Tehran will give a serious and firm response to any destructive measure by parties to the (nuclear) deal."

Instability in Iran increased further on Saturday when Iran's Revolutionary Guard admitted it had mistakenly shot down the Ukrainian International Airlines flight that crashed shortly after take-off from Tehran last week, killing all 176 people on board. The first arrests in connection with the fatal accident were reported as having been made on Tuesday. Justice Ministry spokesperson Gholam-Hussein Ismaili did not say which divisions or organizations those arrested worked for, adding that the case was complicated and had various dimensions that must be investigated before a result could be reached.

Iran's president on Tuesday also called for a special court to be set up to probe the incident.

"The judiciary should form a special court with a ranking judge and dozens of experts," President Hassan Rouhani said in a speech televised in Iran. "This is not an ordinary case. The entire world will be watching this court."

Rouhani called the incident "a painful and unforgivable" mistake and promised that his administration would pursue the case "by all means." Officials in Iran initially denied Western claims that the Boeing 737 was downed by a missile, before acknowledging on Saturday that it had been shot down in a catastrophic error. After days of denying responsibility, commanders of Iran's Revolutionary Guards issued profuse apologies.