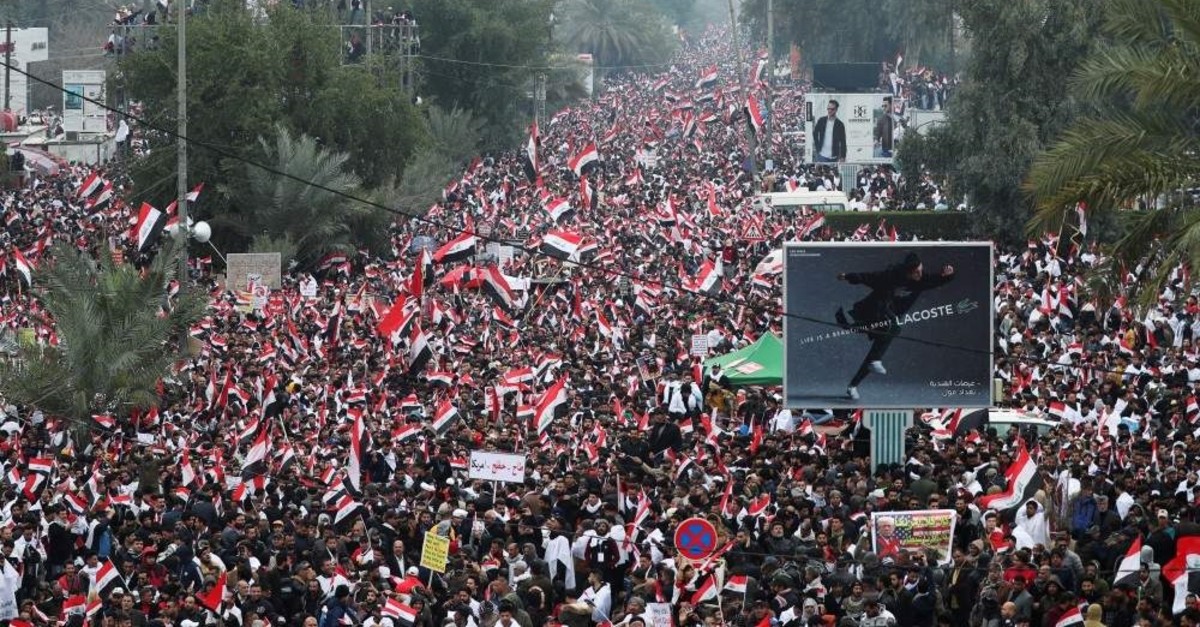 Supporters of Iraqi cleric Moqtada al-Sadr protest against the U.S. presence in Iraq during a demonstration in Baghdad, Iraq, Jan. 24, 2020. (Reuters Photo)
by Compiled from Wire Services Jan 24, 2020 11:28 am

Thousands rallied in Baghdad on Friday to demand that American troops leave the country during the “million-man” march called for by an influential Shiite cleric amid heightened anti-U.S. sentiment after a U.S. drone strike earlier this month killed a top Iranian general in the Iraqi capital.
Since mid-morning, large crowds gathered on the Muslim day of prayers as loudspeakers blasted “no, no America!” at a central square in Baghdad. A child held up a poster reading, “Death to America. Death to Israel.” But by the afternoon the rally had failed to reach the critical numbers called for by the radical cleric, Muqtada al-Sadr.

A representative of al-Sadr took to the stage at the protest site and read out a statement by the influential Shiite cleric and populist politician. It called for all foreign forces to leave Iraq, the cancellation of Iraq's security agreements with the U.S., the closure of Iraqi airspace to American military and surveillance aircraft and for U.S. President Donald Trump not to be "arrogant" when addressing Iraqi officials.

The march has rattled the separate, months-old protest movement that has rocked the capital and Shiite-majority south, where young Iraqis have demanded a government overhaul, early parliamentary elections and more accountability. After defying violence that has left 470 people dead as well as a spree of kidnappings and intimidations, those protesters fear their cause could be eclipsed by al-Sadr’s power play. “Al-Sadr doesn’t represent us,” one teenager said defiantly late Thursday on a blocked-off thoroughfare in Baghdad.