Israeli forces injure Palestinians during protests against US plan 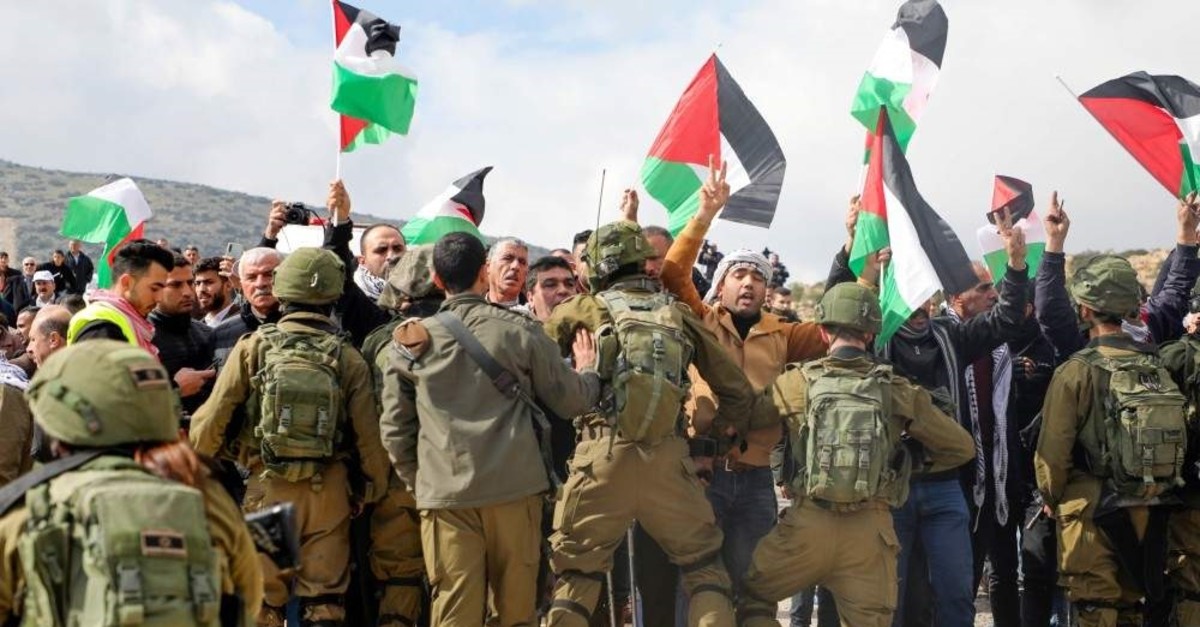 Palestinian demonstrators are surrounded by Israeli soldiers during a demonstration near the West Bank village of Tubas, near the Jordan Valley, Jan. 29, 2020. (AFP Photo)
by Daily Sabah with Agencies Jan 29, 2020 6:09 pm

Israeli forces have stepped up violence against Palestinians who took to the streets in the occupied West Bank to protest U.S. President Donald Trump's Middle East peace plan, reportedly injuring at least 10 people since Tuesday.

The Palestine Red Crescent Society said Israeli soldiers intervened at the northern entrance of the city of Al-Bireh with plastic bullets and tear gas grenades. The statement said five people were injured by plastic bullets, three suffered burns and two were affected by the tear gas. In Gaza, the protesters expressed their anger against the so-called deal by burning Israeli flags and photos of Trump. They also burned tires in the streets to express their objection to the alleged peace plan.

In the face of ongoing Israeli violence that has continued amid years of diplomatic paralysis and diminishing hopes for peace, thousands of protesters have taken to the streets in various parts of Palestine and Amman, Jordan in reaction to the plan's formal rollout. Hundreds of Jordanians took part in a solidarity stand near the U.S. Embassy amid heavy security presence. The participants chanted against the U.S. plan and accused Washington of supporting "Israeli terror" against the Palestinian people. The "#FreePalestine" hashtag also quickly became the top world trend on Twitter.

Palestinian President Mahmoud Abbas said "1,000 no's" to the Mideast peace plan, which strongly favors Israel. Abbas had rejected the deal before it was announced saying the U.S. was hopelessly biased toward Israel. The Palestinians cut off all contact with the Trump administration after it recognized Jerusalem as the capital of Israel more than two years ago, moving the embassy there.