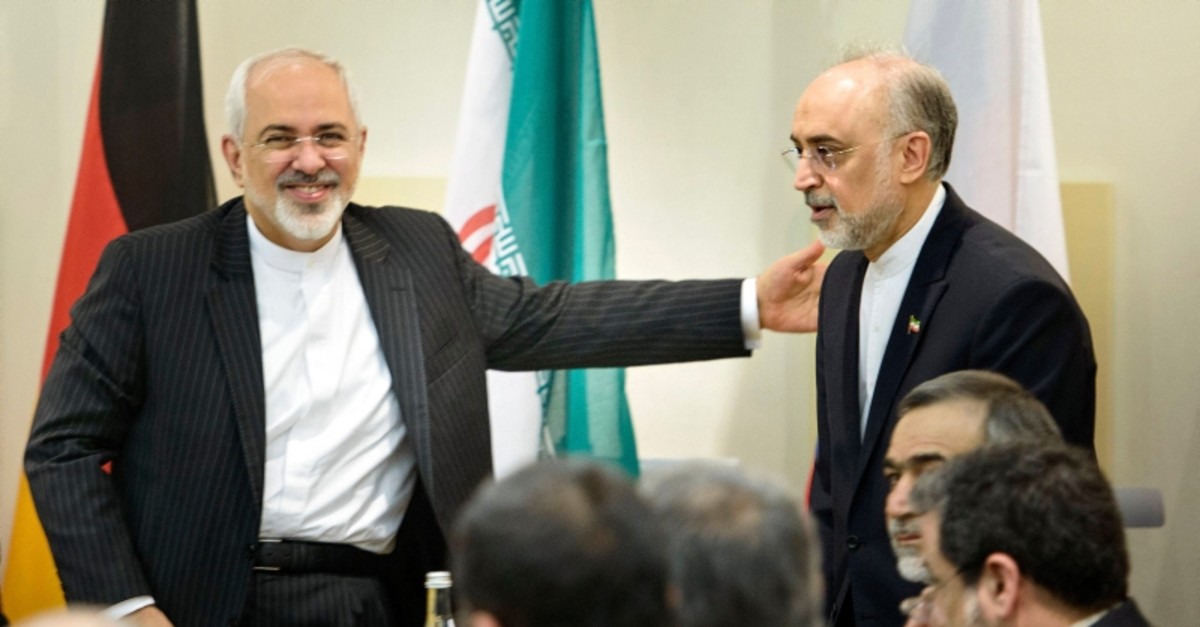 Iranian FM Javad Zarif (L) greets Head of Iranian Atomic Energy Organization Ali Akbar Salehi as he arrives for a meeting with officials from P5+1, the European Union and Iran at the Beau Rivage Palace Hotel in Lausanne March 31, 2015. (Reuters)
by Daily Sabah with Reuters Jan 30, 2020 7:55 pm
The U.S. has imposed sanctions on the chief of Iran's Atomic Energy Organization, the Treasury Department said in a statement on Thursday.

The administration of President Donald Trump, which in 2018 pulled out of the 2015 Iran nuclear deal and reimposed sanctions on Iran, will let the work go forward by issuing waivers to sanctions that bar non-U.S. firms from dealing with the Atomic Energy Organization of Iran (AEOI), sources told Reuters on condition of anonymity.

The waivers' renewal for 60 days will allow non-proliferation work to continue at the Arak heavy water research reactor, the Bushehr nuclear power plant, the Tehran Research Reactor and other nuclear cooperation initiatives.

"There was a difference of opinion between the U.S. Treasury and State Department. The Treasury won," said a Western diplomat familiar with the issue. "There is an appetite for more sanctions so this was a surprise, but others argue that these waivers are vital to ensure non-proliferation."

A U.S. official confirmed the waivers. The official and diplomat said that Ali Akbar Salehi, head of the Atomic Energy Organisation of Iran (AEOI), and the organization as a whole would be placed under U.S. sanctions.

The U.S. State Department is expected to make an announcement later on Thursday.

There had been a great deal of lobbying in Washington to stop the latest waivers as Trump seeks to exert more pressure on Iran. It was not immediately clear why Washington had decided to extend the waivers.

Under the 2015 deal between Iran and six world powers – Britain, China, France, Germany, Russia and the United States – Tehran agreed to limit its nuclear program in return for the lifting of economic sanctions that had crippled its economy.

When U.S. President Donald Trump unilaterally abandoned the deal in May 2018, he reimposed U.S. sanctions in a "maximum pressure" campaign designed to force Iran to return to the negotiating table.

The decision to sanction Salehi and the AEOI would have an impact on Iran's nuclear civilian program because it has operational control over the program, including purchasing parts for nuclear facilities.

The diplomat said the U.S. had likely opted to extend the Bushehr waiver because the Russian firm targeted also provides nuclear fuel to U.S. facilities, causing a potential sanctions headache for the administration.