Mass protest in Amman against US' so-called peace plan 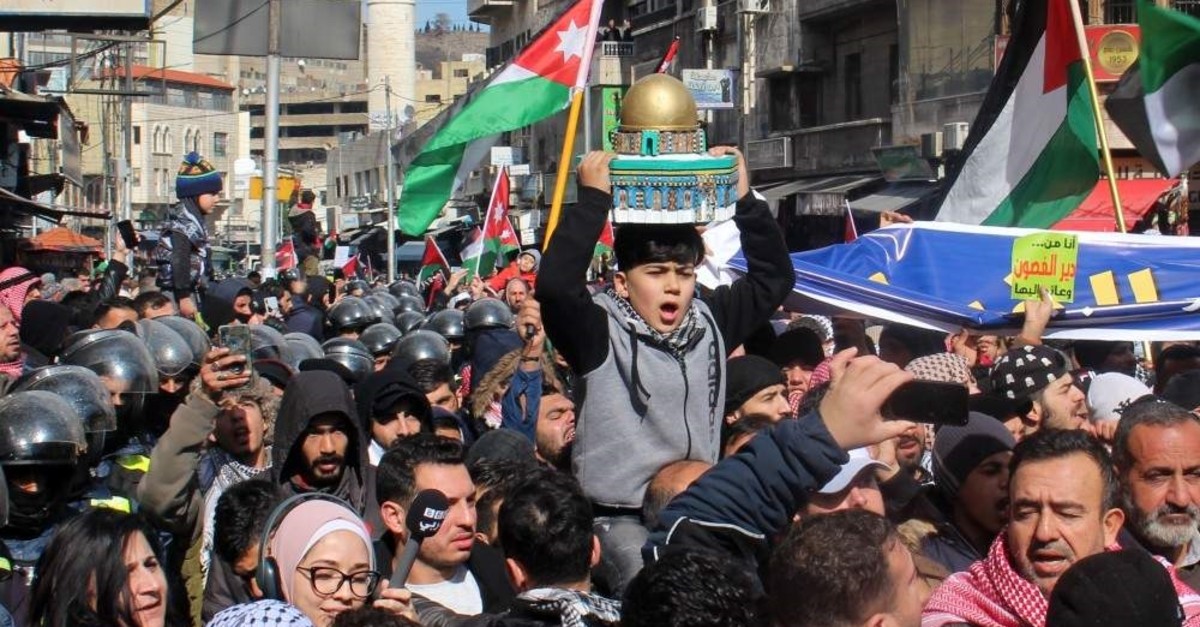 Thousands of Jordanians on Friday rallied in the capital Amman against the U.S.' so-called "deal of the century" Mideast plan.

Despite the heavy rain, thousands of Jordanians responded to the calls by the Jordanian parties, rallied for Palestine and chanted slogans calling for the protection of Jerusalem's al-Aqsa Mosque and burned the Israeli flag.

In the capital Amman, dozens gathered near the U.S. embassy, where protesters chanted against Trump's plan as well as the 1994 peace treaty between Jordan and Israel. "Shame, shame, they have sold Jerusalem," protesters chanted. One banner held by a demonstrator read: "The right of return is sacred," referring to the hopes of many Palestinians that they will be able to return to lands they or their families used to inhabit in what is now Israel.

Another protest was held in central Amman watched by a heavy security presence. Demonstrators also took to the streets in other provinces including the northern al-Zarq and Ajloun, according to media reports.

On Tuesday, U.S. President Donald Trump released his plan to end the Israeli-Palestinian dispute at the White House alongside Israeli Prime Minister Benjamin Netanyahu, with no Palestinian officials present. The so-called peace plan unilaterally annuls previous U.N. resolutions on the Palestinian issue and suggests giving Israel almost everything it demanded.

In a phone call with Palestinian President Mahmoud Abbas on Friday, King Abdullah reiterated Jordan's support for the Palestinian people and the establishment of a Palestinian independent state on June 4, 1967, lines with East Jerusalem as its capital. "King Abdullah underscored that Jordan will continue to work towards the just and comprehensive peace that the people of the region seek, in line with international law and relevant U.N. resolutions," according to a statement by the royal court.