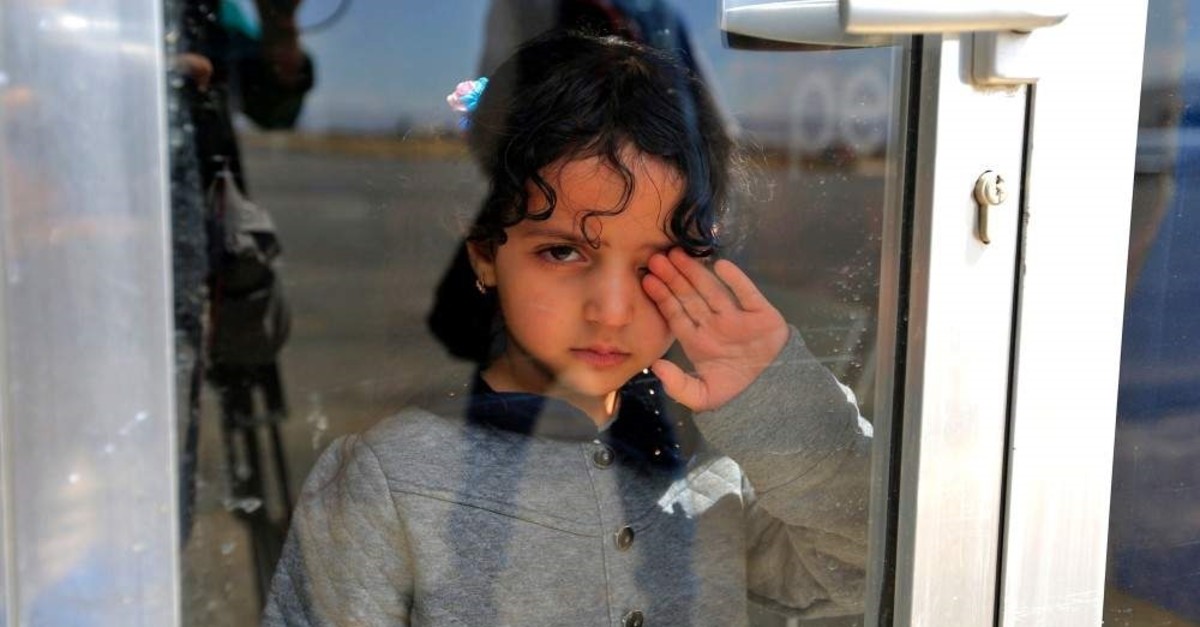 A Yemeni child patient looks through a glass door pane while awaiting at Sanaa International Airport on February 3, 2020, for evacuation aboard a U.N. aircraft bound for the Jordanian capital Amman to receive medical treatment there. (AFP Photo)
by Associated Press
Feb 03, 2020 9:14 pm
A United Nations medical relief flight carrying patients from Yemen's rebel-held capital took off Monday, the first such aid flight in over three years.

Saudi Arabia controls Yemen's airspace and has prevented any flights from leaving the capital, Sanaa, since August 2016.

Eight patients and their families were flown to Egypt and Jordan to receive "life-saving specialized care not available in Yemen," according to the U.N. heath organization. Most were women and children with advanced cancer and brain tumors, while others needed organ transplants or reconstructive surgeries, the U.N. said.

Yemen's capital has been controlled by the Iranian-backed Houthi rebel group since 2014. A coalition of Gulf Arab countries led by Saudi Arabia and the United Arab Emirates began a military campaign the following year in support of Yemen's internationally recognized government.

The Houthis have criticized the U.N. for the small number of patients airlifted out of Sanaa. The Houthi health ministry issued a statement Sunday saying the U.N. initially agreed to airlift 30 patients on a larger plane belonging to Yemen's national airline, but instead used one of its own aircraft with limited space.

The Houthi health ministry said 32,000 people were in need of urgent medical and surgical interventions, such as kidney transplants and heart operations.

The U.N. health agency said the medical air-bridge operation is expected to continue with another three flights this week carrying a total of 30 patients. Later, a joint statement by three top U.N. officials in Yemen called the relief flights a "temporary solution to reduce the suffering of Yemeni people until a more sustainable solution is reached in the near future."

The Norwegian Refugee Council representative in Yemen, Mohammed Abdi, said in a statement Monday that the resumption of flights "comes too late for thousands of Yemenis who have died waiting to leave the country for urgent, life-saving care ... Many more are still waiting to get the healthcare they need."

More than 100,000 people have been killed in Yemen's conflict since 2015, according to data published last October by the Armed Conflict Location & Event Project. Millions of Yemenis live just a step away from famine and rely on food aid.